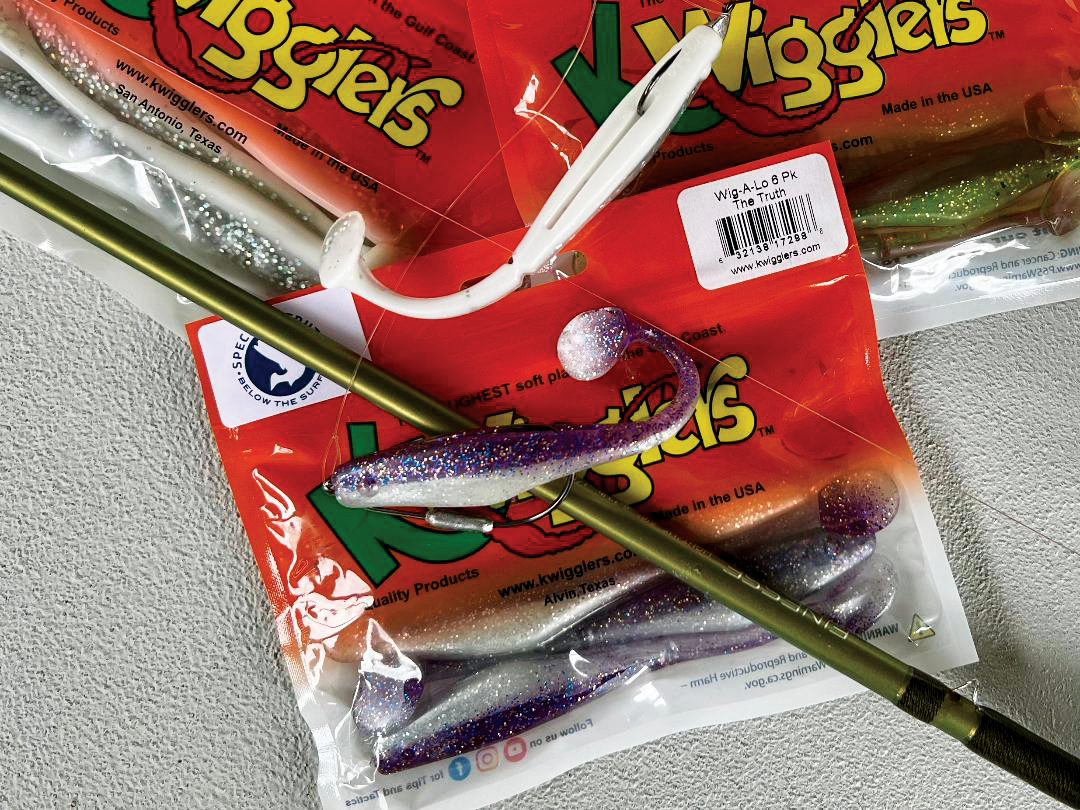 KWigglers Wig-A-Lo is making its debut in tackle stores across Texas.

Guessing that even though this is the January issue of TSFMag, you might be reading it before Christmas. So, I want to wish everybody a Merry Christmas and Happy New Year.

So much has happened the past twelve months. Although 2021 was not altogether bad we certainly faced some serious challenges. Saying that, we probably learned more about our fishery than the entire decade prior.

Here are some things I took away from the experience: 1) We still have a robust fishery. 2) We learned how quickly TPWD could react to a natural disaster with emergency regulations. 3) We also saw an incredible shift toward conservation of our speckled trout fishery by encouraging numbers of recreational anglers. At the end of it all I believe the majority have become more aware of how truly fragile this fishery is and become better stewards of the resource along the way. Amen to that!

Port Mansfield is holding its own. A few cool snaps have allowed me the opportunity to check out traditional big trout areas and, for the most part, the results are not too bad. All but one area has yielded some good trout, best one so far has been about eight pounds. Our forage stocks are flourishing like I have never seen and our redfish fishery remains strong. Flounder have been slow but the ones we are running across are solid. Mid-range trout, 16 to 20-inches, are like footballs and, as of this writing, so are the larger specimens in the 23 to 28-inch range, (see accompanying video). This is the time for them to start plumping up for winter and it certainly seems they all received the memo.

During the latter weeks of autumn we found redfish and some trout staging along big flats and grass lines. But as water temperatures continued to cool (58.7° coolest so far), I have watched the fish, mostly trout, and a few reds, stage within potholes surrounded by thick grass. As water temperatures tick up a few degrees the fish begin sliding out to larger flats and grass lines. We recently identified this pattern and I made mention to the group to concentrate more specifically on the potholes around us. Keying on this we pulled trout after trout (and a red or two) from various “subliminal” potholes along the wade. I use the term subliminal only because these potholes were not all crisply defined; many of them were somewhat vague in color and rough around the edges. Something worth noting here is that not all potholes are created equal. It is a privilege to be on the water enough to see, experiment with, and be able to identify these type of patterns.

As January settles in we can expect water temperatures to drop and remain cooler. This should keep the trout good and plump for the upcoming coldest months. I will be capitalizing on stronger lunar phases coupled with tide flow and warming (or cooling) trends. Speaking of tides, since the re-dredging of the Mansfield East Cut our tides are more pronounced. Example: Years past I would fish areas where a few inches of a crab trap would be exposed and it would take just about all day for the crab trap to slowly disappear with a rising tide. Nowadays, the same areas, it takes just a few hours for the water to rise and cover the crab trap. That is important; but how, why, when, where? Well, that is for another article.

The past several months I have been tossing the new KWigglers Wig-A-Lo soft plastic lure. For those of you that do not know, it has been several years in the making but has finally made its debut. It is 5-inches long with body shape similar to the Willow Tail but with a more tapered belly. It has two deep multi-layer hook-slots on the back and belly. It has an action hinge halfway down the tail with a mid-sized paddle. The nose, or head of the bait, is uncompromised which allows for a good jighead connection. The bait is durable and has unparalleled buoyancy with exceptional body-wobble as it swims through the water while the tail paddles constantly counter to the body wobble. A somewhat basic design but with unique motion characteristics that make it stand out. Check out KWigglers Facebook page and YouTube channel for How-To advice and other videos on the Wig-A-Lo. Available at all Fishing Tackle Unlimited locations as well as most tackle stores across Texas.

Until next time – stay safe and let’s keep practicing good stewardship of our resources!