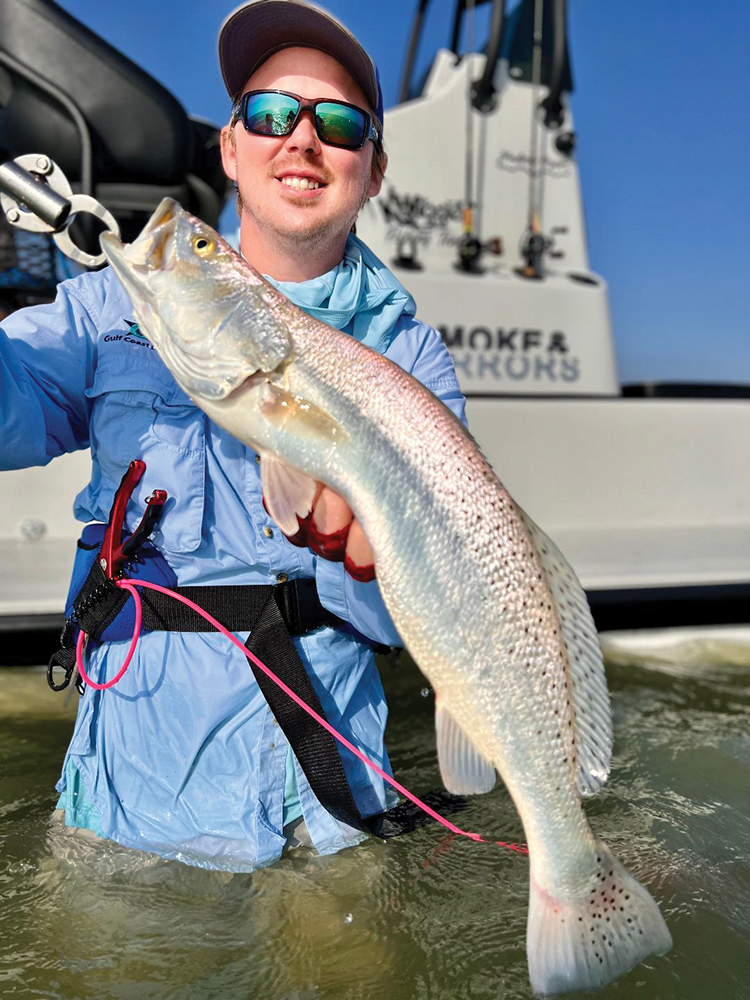 Greetings from Port Mansfield. Here we are working past the heavy winds and each season brings me to respect and work with this adversity just a little more. Despite the bumpy boat rides and salt spray all over your gear, glasses, and face the winds provide much more than one might imagine. Let’s take a closer look.

When the southerly breeze turns more than 20mph or so and hovers around the 25-30mph with gusts around 35, one might think it’s too windy to fish. Well, it is too windy to fish “comfortably” but it’s not too windy to fish. Sure, nobody wakes up eager to fight a stiff 30mph wind but there are morsels of good catching under every whitecap. First, winds create current and churn up the bay which moves shrimp, mullet and just about every piece of bait around. Gamefish need not see to eat so they can and will find your lure when the water is muddy. I used to be timid of muddy water and still to this day would rather (only for the optics) fish pretty trout green water with scattered potholes and grass beds, but let’s face it, that is not happening every outing. If you fish enough you will learn to work with the wind and the muddy water that comes along with it.

Besides creating current and discombobulating baitfish, another “macro” perspective to consider is the obvious. Some anglers simply will not go or will come in early if it’s too windy and the result is less pressure on our bays, (no shame…I too am guilty). Mother Nature may be doing her part when she sees fit. This may be a little farfetched, but I have seen it play out firsthand. On the contrary, high winds bring out the best in anglers when they do decide to “grin and bear it.” I have been there, done that, and I always explain to clients all variables when having to deal with those strong southerly or northerly winds. I offer my suggestion based on personal experiences and the angler’s experience and their expectations. The last thing I want is a miserable outing for any angler and them thinking, “he should have explained it might be this way.”

Continuing in the wind arena, most anglers are keen on reading the water when its calm but are you able to pay attention when its windy also? Recently I fished with long time client Bobby Walker and his customer Jim Miller, and it was blowing. Water was churned up; it was dirty and there were white caps in a foot of water. Since we were faced with these adverse conditions we elected to make a bet on who would catch the first keeper on a topwater. I was dialed in, paying extra close attention because I wanted a free dinner. About five casts in I could see a subtle yet distinguished wake under my topwater despite the waves. I let it pause and let the waves do the work. A short twitch later and I had a nice redfish on-the-line but it came unbuttoned. I continued paying closer attention with each twitch and pause and, sure enough, I was able to note three other subtleties in and around my topwater which resulted in blowups. I suspect some will not toss tops in 25 to 30mph winds but it can be remarkably effective. Keep this in mind next time you are out there.

Tides have risen and the baitfish are just about everywhere. Shrimp are showing themselves and redfish continue to yield to anglers. I am still trying to work on those bigger trout and have been quite successful with some long, big-headed, post-spawn females and I am delighted to see that. As we move forward expect the flats to stay full of life. Be sure and concentrate efforts along color changes and tide lines. These areas will hold a few nice “keeper” trout along with some redfish. Flounder are showing themselves, but most are on the smaller side. They grow fast so by summer’s end we should see some nice keepers. Best baits have been the KWigglers Ball Tail Shad and 4-inch Paddle Tails in a variety of colors. As far as topwaters go, I have been using the Mansfield Knockers and really like the G.O.A.T., Wounded Mullet and the Salty Frog.

Until next time stay safe and remember – Fresh is always better than frozen!