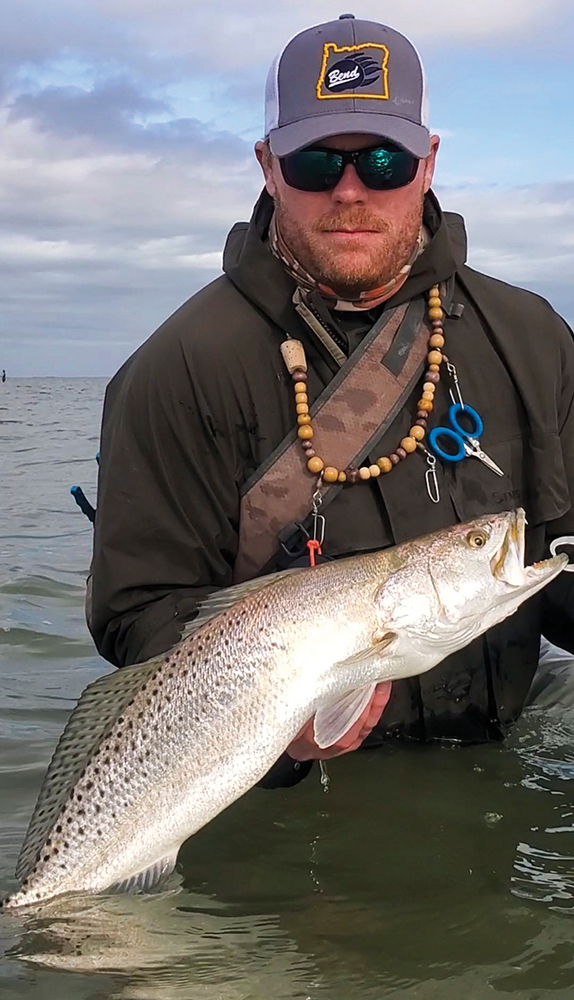 Howdy from Port Mansfield! Wintertime fishing will soon be in the rearview and springtime is quickly approaching. Hopefully we still have some cool to colder weather opportunities ahead as well as a fish of a lifetime. If you are reading this in late February or early March, the best time for a heavyweight may be upon us. So, read this article quickly and get out there!

Winter fishing has been good. I rate it 6.5- to- 7 on a scale of 1- to- 10. Of course, 10 would be epic. So, what does a 7 rating amount to? Thus far we’ve had some trout close to 30-inches with one going well over eight pounds. It’s ironic that the 30-inchers weighed less than some of the 28s. I’m convinced that timing is everything regarding weight of wintertime trout. My trips have yielded some nice fish in the three-to-five-pound range, with several over six pounds and a few touching the seven-pound mark. Additionally, I have identified some redfish zones for field testing soft plastics. This pretty much sums up a 7 rating in my mind. With another month or so left in trophy trout season I am hopeful that my rating could improve to 8 or possibly even 9.

Now is a good time to point out the attached QR code. I’ll try to be brief but this is an excellent learning opportunity. Several years ago at the Chandeleur Islands with some buddies, we were wading a reef about 300 yards long and 20 yards wide. A big school of bull redfish came through and corralled some mullet. Had I not witnessed this I would not have believed it. Those bulls were running the mullet up on the bank and smashing them with their bodies. I was not sure if they were eating them afterward but time after time they crushed the mullet against the shell. I did not think much of it at the time because they were also crushing my topwater.

Now, fast forward to the other day. I was tossing a Corky and working it through shallow potholes and feeling a strange strike. I landed quite a few, all foul-hooked on the belly and lower gill plate area. Amazingly, I recalled the Chandeleur trip and connected the dots, or at least tried to. Here I was, years later identifying and relating to something that happened while fishing in an entirely different state. Case in point – Always listen and watch what the fish are telling you. This is just another piece of the priceless education you gain while enjoying the sport of fishing.

Lately, I’m still working the shallow stuff, even when it’s cold. The coldest water temp documented this season has been 47°. I quickly identified nothing likes knee-deep 47° water – not even my toes. So, I relocated to an area more likely to warm quicker as the day progressed. Once the water temps reached 53° we started catching fish. As it rose to 55°-57° we had solid action. It is awesome to see fish gradually move up on a flat as temps rose, and even better to watch them become more active and begin to feed.

Same goes for water temps being too warm in the winter on a flat, although this mainly affects big females. Male trout tend to “deal with” warmer water temps better than the big girls. As the water warms too much on a particular flat the females fade away and stage wherever they are comfortable. With another cold snap they move again. Pretty cool to watch this unfold.

Best baits have been KWigglers new Ball Tail Shad color called, The Truth. This color was designed by the team at The Speckled Truth. We partnered with them and agreed that a portion of the proceeds from The Truth’s sales would be donated to Doctor Greg Stunz and his team at Harte Research Institute and the Mississippi Gulf Coast Research Lab. Likely the donations will be small, but glad to see this collaboration to help our resource. They say every bit helps.

We are still working our baits low and slow, on light 2/0 jigheads. A few of the big fish have also been taken on KWigglers Willow Tails and Corkys.

Heading into March, winds will become more consistent and will increase from the southeast prior to approaching northers. It’s easier to accept this than fight it…learn to use the wind to your advantage. Don’t get discouraged with muddy water, the fish will still eat. Stay safe and remember our resource is fragile. Mother Lagoon does not have an endless supply!

Knowing what the fish are telling you.