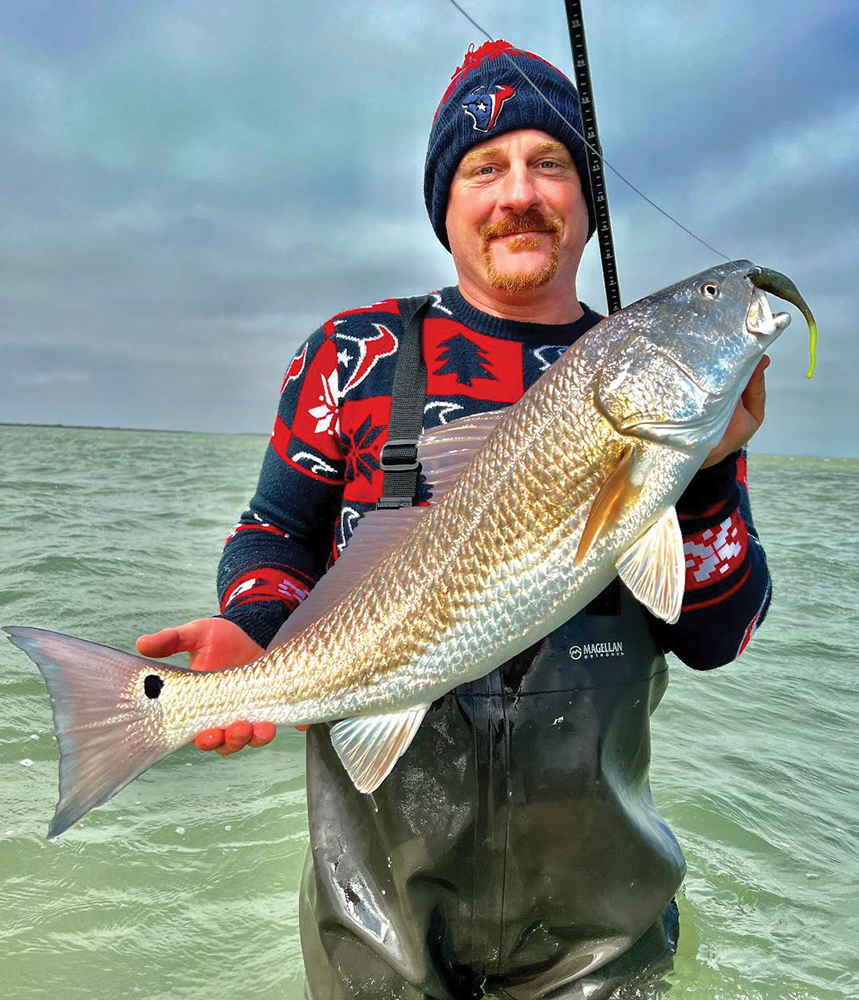 What a difference a month can make. Winter had been eluding us as autumn seemed to linger forever, but all that’s changed. One good cold snap coupled with the recent full moon dropped water temperatures to 48° and tide levels lower than I’ve seen in a long time. Immediately following was another punch of wintry weather dropping temps yet again, only this time our water temperatures stabilized in the mid-50s. This alone contributed to our trout “holding” in place.

What is more interesting this year than years past is the increased flow from the gulf through the recently dredged East Cut. How will this affect fishing in the Port Mansfield area? I ponder whether movement and feeding patterns observed during the years of very limited flow will continue to hold true going forward. Not to fret too much though, our minds need challenges and what better topics to occupy our thoughts. I’ll start with previously established patterns and work backwards from there if needed.

Our redfish population is strong and I’m pleasantly surprised and baffled at the same time, especially after surfing social media feeds. Limits of reds are common day in and day out, and have been since summer. Only now the reds are bigger and fatter. Case in point: We’ve been getting slot reds over nine pounds on a somewhat regular basis. Thank goodness for the fine folks who do their part catching and releasing to help offset the many determined to keep limits.

Trout are still holding in groups, mostly in areas as small as a couple hundred square yards. Cruising the flats after the recent tide drop on a calm afternoon with the sun over my shoulder, I could see clearly at least 75 yards in every direction. Every species, including specked trout was easy to identify. I was thinking how unbelievably blessed we are in the LLM to be able to see the fish before we set up on them. Pre-freeze we would see numerous groups of fish (trout and reds) and just stop the boat and chit chat about who was going to catch the first six-pound trout. Times sure have changed.

Most of the trout we are catching, 3- to 5-pounders, are smack dab in the middle of new TPWD 17- to 23-inch slot, which is cause for concern. I voiced this at the Port Isabel public comment meeting held back on January 11. I would have personally preferred a slot of 16- to 20-inches, which according to data presented would have been a greater boost to spawning biomass. I was pleasantly surprised to hear my opinion echoed by several South Padre guides. All that said, the proposed rule of three fish with a slot of 17- to 23-inches was adopted by the commission on January 27. Not exactly what I hoped for, but a win, nonetheless.

As March approaches I will be dialing into and probing small areas close to deeper water with grassbeds and softer mud. You will find me working the areas methodically and I might even leave an area and come back several hours later. Weather, especially the sun coupled with the presence of bait, will be a key component for a successful outing. If you’ve noticed in some of our YouTube videos we rarely get started before sunup during the winter and that’s not going to change. Winter is the time to fish smarter, not harder. I will be working my baits low and slow in between grassbeds and inside potholes. I will test the topwater bite during warming trends but the water temperature usually needs to be at least 62° for trout to begin feeding reliably on the surface.

I’m as hardheaded as they come and have often tried to “force feed” fish, something I caught myself doing just last week. I just knew the fish wanted a big paddletail (Wig-A-Lo) and had everyone tossing them in a variety of colors. After being turned down twice by redfish, I switched to a Ball Tail Shad. Next cast did not disappoint. Everyone switched and it turned into a fish catching day. Take my advice – Pay attention to what the fish are telling you.

I’ve closed out another year of Empty Stringers Catch and Release Program and am happy to report 87 entries that yielded 582 keepers being released by clients. If you count my personal releases, we returned 800-plus keepers back to our bay during 2021.

Till next time – Remember the resource. Keep only what you need and release the rest.