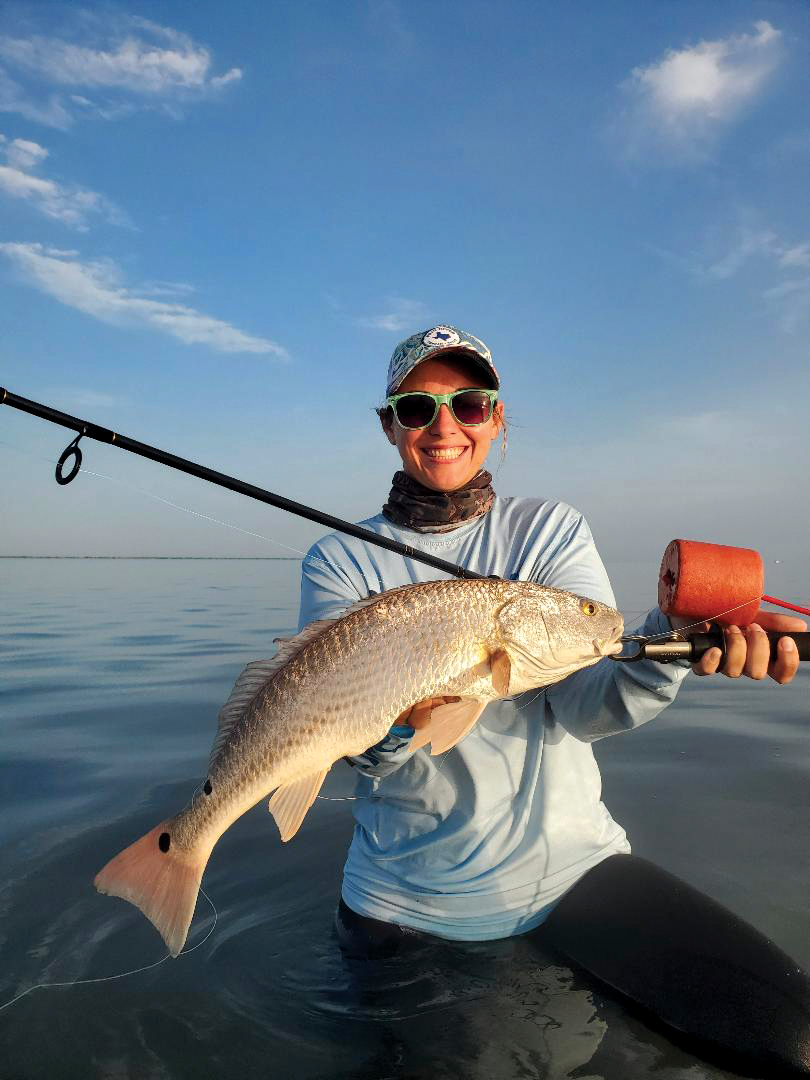 Megan Vaughn with her first-ever redfish. What a beautiful smile!

Greetings from Port Mansfield! I want to discuss a topic I call Power of Conversation. As fishing guides we could be classified as SMEs, known in the corporate world as Subject Matter Experts. SMEs are highly regarded for their knowledge, routinely providing information that is crucial to the success of the business. Fishing guides fit that same category from a “boots on the ground” perspective. It is one thing to gather data from gill net and dockside creel surveys but it’s another to get information from fishing guides who spend multiple days per week on the water. This brings me to the Conversation about Conservation.

Although most of my clients are repeat, I occasionally get calls from people I have not fished previously. When this happens (usually via text or email), I follow up with a phone call. This gives me a better feel for their expectations and when that is accomplished I’ll provide an overview of my style of fishing. Next comes the ground rules for retaining fish, which nowadays is mostly about speckled trout. I provide a brief explanation of the freeze and why we must conserve. I finish by telling the prospective customer that retaining a few reds or flounder is perfectly fine. So far I’ve had 100% buy-in. I believe it’s all about the manner in which the topic is introduced and presented. Lower Laguna fishing guides know better than anybody how tough trout fishing is currently, so why give a skewed view of what customers might expect by posting photos of dead trout hanging from nails at the dock to mislead them? This approach doesn’t do anybody a bit of good, except fuel a narrative at the expense of the fishery. Let that soak in!

Our tides are slowly declining and water temperatures remain in the upper-80s to low-90s. A recent outing began with 84° water temperature and ended at 91°+. Knowing this I have been starting very shallow at dawn while the water is still cool. When I say shallow, I’m talking 10- to 12-inches. Reds will stage on hard sand through the night and remain until mid-morning at the latest, (see Megan Vaughn’s photo). Once the mullet begin leaving the shallows the reds follow suit. This is when we need to do the same. As the day progresses and the water temps rise, I start to venture toward deeper water. Bottom depressions often hold fish and when it’s hot that’s where they will be. If you know me, you already know I’m reluctant to venture beyond knee-deep but I do it when I’m forced to. Such is the case this time of year; the belly-deep stuff can be rewarding but comes with other challenges such as keeping reels dry, especially for new anglers. I just described a recent Empty Stringers trip with new clients where we had more than sixty-five reds and a few trout between four anglers. When the most fit angler of the group says his forearms are aching from catching redfish its time to call it a day. Take a look at Justin Rodriguez as he releases the last fish of the day.

Snook fishing has picked up and we’ve had some nice ones but they are still widely scattered across the flats. I’m doing my best to dial in a little tighter each day. Based on what I’m seeing I am confident this will be a fair to good year for linesiders. There have been several big schools of reds in various parts of the Laguna, which is a good sign. This should hold through fall and hopefully get even better. Our trout bite remains sporadic at best. Again, I can go several trips and not see a trout and then have a handful the next day. This is a sure sign that trout need time to recover.

We just finished the 46th Port Mansfield Fishing Tournament, the first time we did not have a trout division. Reds and flounder comprised the tournament stringer both days and were based on the Blackjack format, with live-weigh incentives. It was a great success with almost 50 bay boats entered and a 62% live-weigh/release accomplished. That is huge and we are very proud of the outcome. The Offshore Division included 24 boats but were hampered by high seas. Many thanks to all the sponsors and the Port Mansfield Chamber of Commerce for putting together an awesome event.

Mark your calendar; PMCOC will be hosting a ReleaSense training session on Sept 19 with special guest Dr. Greg Stunz and his team from Harte Research Institute at 4:00pm. Stay tuned to social media for updates. This event is free and open to the public.