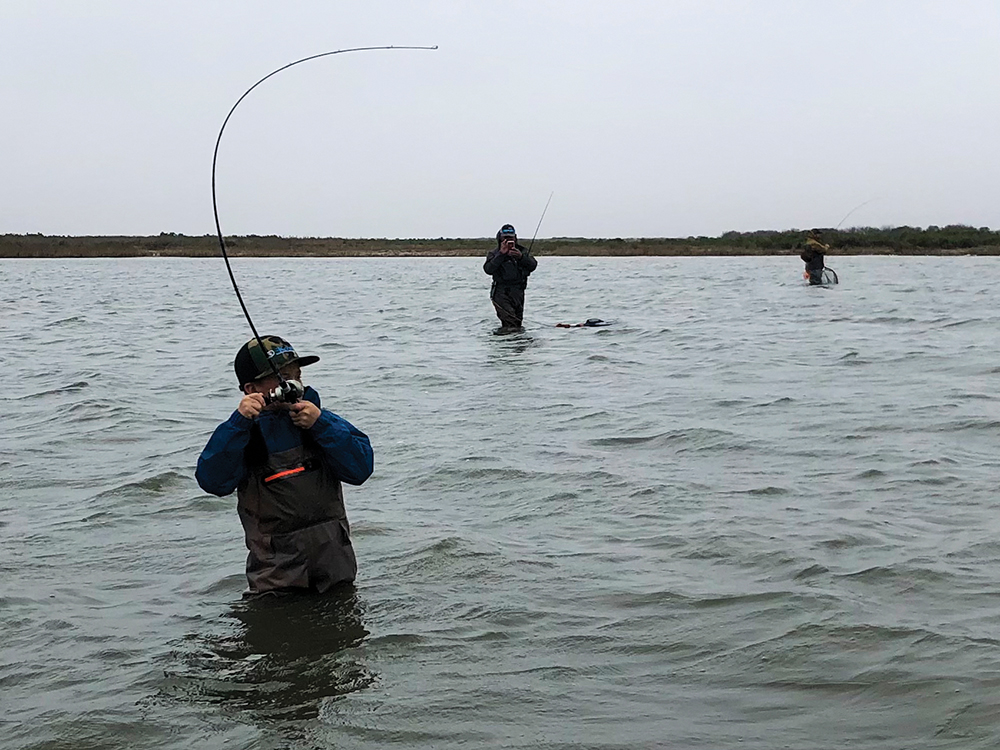 I’m sure that by now everyone has seen the photos of dead fish circulating on social media. All I can say is thank God we didn’t have social media during the 1983 freeze. You have likely heard a lot of doom and gloom but at the time of this writing our fishing is actually showing better signs of returning to normal than one might think. My dad always told me that Mother Nature will always take care of herself. So far in my 57 years on this earth (35 years of that guiding local bays) he has been right. I have seen many fish kills; red tides, freezes, and whatever, but Mother Nature always seems to know how to take care of her kids. That will be as much ink as I will use on the subject of the most recent freeze.

Here in the Seadrift-Port O’Connor area we are experiencing some very good fishing in a lot of different areas. Out at the Big Jetties it seems the fish never skipped a beat; guys fishing there have been steadily catching their normal species through the first week of March. San Antonio mid-bay reefs have been holding large numbers of smaller fish with some reefs holding quality keepers. I expect this should only get better as the tides distribute fish more evenly throughout the bay. There are a lot of mullet staging  in back lakes and along bay shorelines, setting those areas up to be on par with what we normally see in April.

By now I should have already been running my usual March reconnaissance trips throughout all the area bays but I have not done this yet. Instead, I have been concentrating my efforts in San Antonio and Mesquite bay areas.

I have been concentrating on wading reefs for trout in the northern portion of San Antonio Bay. Not all reefs are the same and there are certain key elements that need to be present before I stick the Power Poles and step out of my Shallowsport X3. First and foremost I look for bait to be present; this can be mullet milling on the surface or schools of mullet cruising along the reef. It can also be birds working over schools of mullet or shrimp passing within casting distance of the reef.

Another key element is how well the layout of the reef can accommodate a group of wading fishermen. Meaning, the reef needs to be large enough for my group to wade without spooking the fish from the area. I have noticed on smaller reefs that between me getting the boat situated and my guys slipping into the, water we have spooked fish from the area. You will know this when the first angler out of the boat sticks a couple real quick, but as the others try to move in (see also potlick) they create too much disturbance and the fish move away from the reef. For this reason I will choose larger reefs to wade larger groups of anglers.

The reefs also need to have what I call “troughs” running through them. It seems over the years I have noticed more fish and fish of better quality feeding around these troughs. A trough can be as narrow as a foot across and a few inches deep, or as wide as twenty feet and three feet deep. As long as you have water movement it seems there will be a gamefish or two feeding in that area.

There are limitations as to when you can fish these open bay reefs, one of which is wind,  and guess what? We will have plenty of wind in April. There will be days when fishing the reefs is simply not in the cards and that’s when you’ll see me headed to the more protected backwaters of Matagorda Island.

I will concentrate my efforts along the south shoreline of San Antonio Bay such as drains that connect back lake areas to the main bay, and also pockets and coves that have guts running out of them into the bay. Redfish will corner baitfish for an easy meal in these drains and guts, and hopefully my 4” Bass Assassins will fool a few of them.

By the time you read this article Chad and Cole Starr of Coastline Marine in Seabrook should have my new Shallowsport X3 finished and I will be getting slime all over it. Thanks also to Wes Hudson and the crew at Shallow Sport Boats.