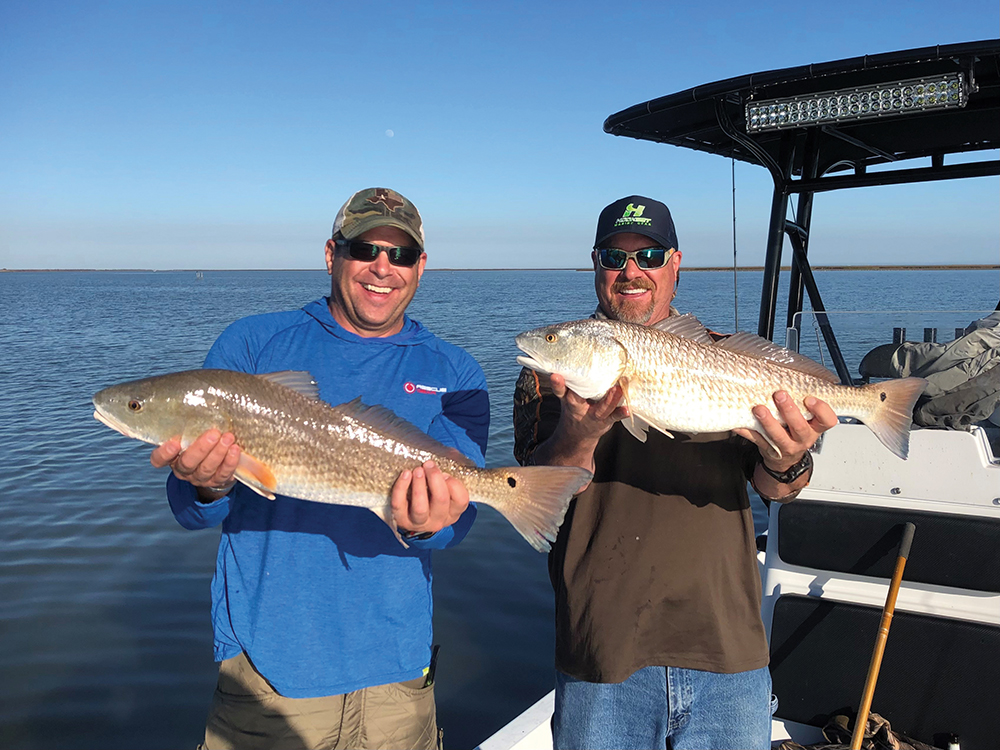 Boat fishing has been on fire the past several weeks.

Well, we made it through another winter and luckily we never experienced any major fish kills. Fishing in March was very rewarding for anglers in the POC/ Seadrift areas. It didn’t seem to matter if you were drift-fishing with arties or bait, or if you were even luckier – wading with arties. Redfish and black drum were very plentiful in the back lakes of San Antonio, Espiritu Santo, and Matagorda bays. The jetty guys did their thing hauling in hefty limits of spawning sheepshead while also bringing in their fair share of redfish. Here is what I expect to be going on in the month of April.

There are a few things we can depend on in April; the most important of these will be wind. I know, we all cuss it, but during those days that we have weak tides the wind will create water movement up and down shorelines at a stronger rate. It will push water into the back lakes, or out of them, depending on the wind direction. It will push water across reefs and around points on any given shoreline. I will take a windy day of fishing over a dead calm day any time.

The areas I will be fishing in April are pretty much the same areas I am fishing today in March. Shorelines with back lake entrances are what I am keying in on, mainly on the south shorelines of West Matagorda and Espiritu Santo bays. The bay I will be fishing on any given day will be dependent on the quality of fish the bay has been giving up. As of this writing West Matagorda is my go-to.

Working along the main bay shorelines, what I will be looking for is our annual springtime migrations of menhaden and glass minnows. Normally we get an influx of both running up and down the shorelines during April. You will see the rafts of baitfish easily along the shorelines. To set up and fish these you will want to wade to within casting distance of the rafts and cast towards the approaching rafts and drag your lure along with them. I will make drastic jerks and pauses to cause my lure stand out among the numbers of baitfish and to entice trout to make instinctive strikes.

I will say most of the time you will have to be fishing the southern shorelines of any of the bays mentioned, simply because the gusty springtime winds will likely make it too choppy and muddy to fish other areas.

When fishing these rafts of shad I will generally start out with my tried and true 4” Saltwater Assassin Sea Shad in either Purple Chicken or Magic Grass colors rigged on a 1/16 ounce Bass Assassin jig head. If this lure doesn’t entice a strike after giving it a good workout, I will normally switch to a MirrOlure Soft-Dine XL in the (#01) Pearl-Chartreuse or the (#91) Chartreuse-Silver-White Belly. If I’m still unable to find any takers I would be silly not to try a topwater before leaving the area in search of more cooperative fish. For this I would recommend the MirrOlure She Dog in (GCCRH) color pattern. While I’m not big believer in a topwater’s color making a huge difference in the number of strikes we can attract, but I do like the red head of this color scheme and the flash from the chrome body. I’m also a big believer in the high-pitch rattle of the She Dog, even while at rest during pauses in choppy water.

There will be plenty of fish to be caught in the back lake areas of Matagorda Island. Redfish will be patrolling grassy shorelines, and more often than not ready to eat. Look for flounder to frequent the entrances and mouths of feeder sloughs in these backwater areas. Trout should be holding in the sand pockets in knee to waist-deep water.

The primary signal to direct you to feeding fish is bait and/or bird activity. Never pass up any type of activity whether it is a tern (liar bird) or even swirls from a mullet, or even a hopping shrimp. Any of these signs have potential to turn an average fishing day into a great fishing day.