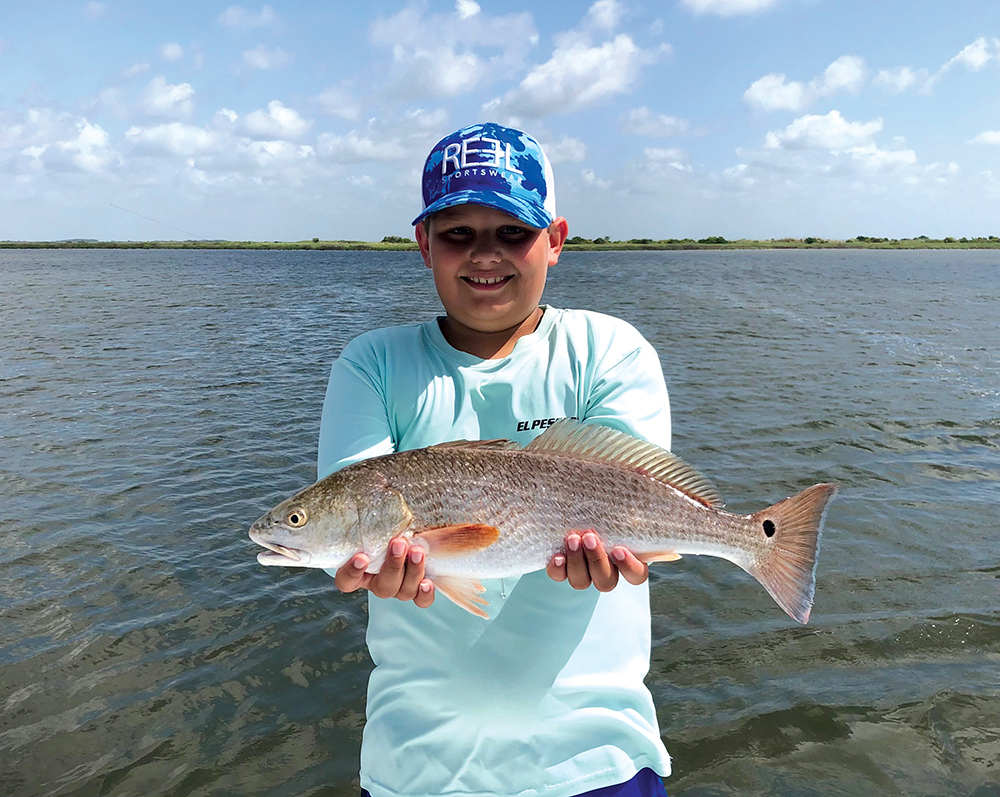 It’s no secret the amount of rainfall we’ve been receiving and sooner or later it all ends up in the bay. The water color in much of San Antonio and Espiritu Santo bays resembled iced tea during most of June; ditto the Ranch House shoreline in West Matty. Never a good sign. What we learned, though, was that even when the water looked completely fresh didn’t mean it was. We caught trout in many places in Espiritu Santo while San Antonio was a different animal altogether. All along the south shoreline from the South Pass area down to Panther Point gave us nothing but gafftops.

June was very good for us in the surf and it continues to hold up well thus far in July – lots of hungry trout and redfish. Somewhat different than years past as we’ve had to dodge pockets of off-colored water at times due to runoff from the beach. I dodge the dirty water in the surf because you usually end up catching mostly hardheads and sharks. We’ve had to play the winds and tides, deciding whether to head west out of Pass Cavallo or east out of the Big Jetties to find green water.

Hopefully, heading into August, and barring additional heavy rainfall and runoff events, the fresh water will have worked its way out of the area bays and surf. Notice I said hopefully.

The surf can be fished by a variety of methods and wading is preferred by most of my clients. The key to wade fishing the surf safely is where you anchor the boat. I always try to anchor between the second and third bar, in the second gut. In some instances, where the first gut is wide enough, I will anchor my Shallow Sport there.

Wading is our first choice, although really calm days offer the chance to remain in the boat and ride the troll motor along the beach. When fishing in this manner we concentrate our casts in the first and second guts. Pitching your favorite She Dog into a flat surf is an excellent way to spend the morning. The explosions you get from an angry tide-runner are second to none!

Another way to fish the surf, and probably the most popular for many anglers nowadays, is setting your anchor so that you can throw live bait back into the first and second guts. I am going to tell you right now though; you have to get that bait where the trout and reds are. I see anglers out there every day anchored too far offshore, outside the third gut. Some will be casting further offshore and others just throwing alongside the boat. This is where you will pick up stuff like large stingrays, sharks, and any number of undesirable species. You need to target the first and second guts!

Granted there will be days when it is unsafe to anchor near the beach and these are the days you simply shouldn’t try it. My rule of thumb is that if waves are breaking on the third bar, turn around and go back to the bay. Better yet, if the marine forecast says seas bigger than two feet, don’t even try. The surf can become a dangerous place very quickly.

Lure selection lately has primarily been our trusty Saltwater Assassins in Purple Chicken and Magic Grass, rigged on 1/16 ounce Assassin jigheads. I occasionally have a topwater aficionado that only wants to throw tops, and I’m fine with that. I will say that the angler that sticks with his topwaters will end up one of two ways; he will either have the largest stringer of the group…or the lightest.

A final bit of advice about wade fishing near passes to the gulf pertains to wearing some type of PFD. There are many styles available, from inflatables to vest types. Passes have stronger currents than you encounter further down the beach and the risk of being swept in or out by the tide is often very real. I prefer not to wade near any of the passes for this reason.