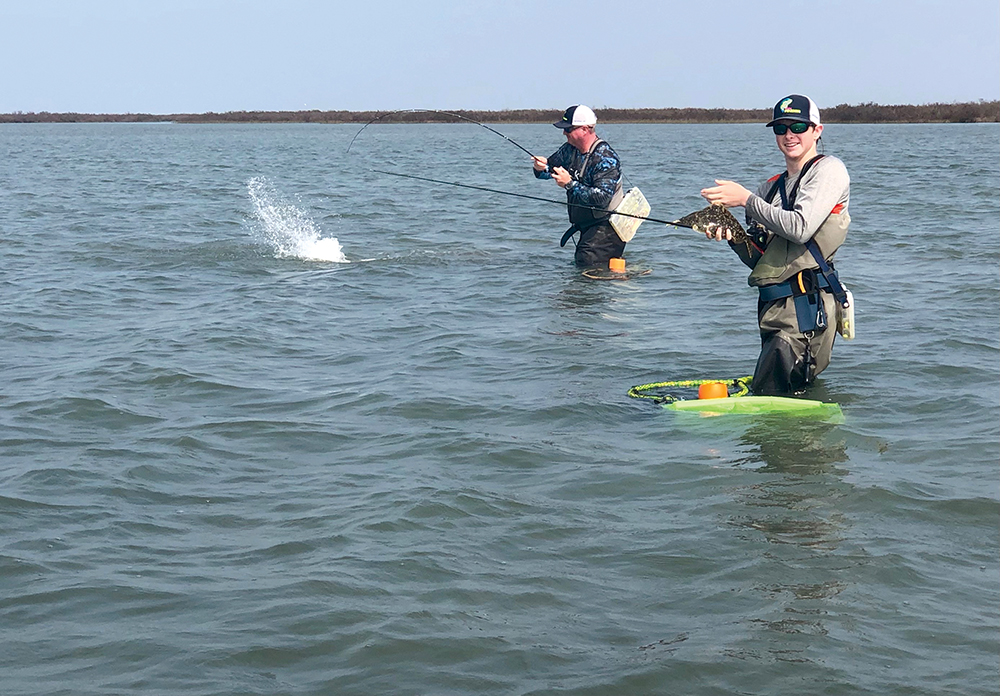 Who wouldn’t love a nice flounder and redfish double hook-up?

Here we go again folks; Mother Nature has proven yet again she is one tough old lady. My normal December fishing scenario is; point the bow of my Shallow Sport X3 towards San Antonio Bay, stop on any bait-laden reef, and catch trout on just about any lure you want to throw. Load back up in the X3, head to another reef, and do it again.

This normal December scenario could still play out if the fresh water runoff from the Guadalupe River moves out quickly, and it might because of the severe tide drop caused by the recent northwestern front that just moved through our area. For the better part of October and all of November I have been changing up my normal routine, so this fresh water runoff thing really hasn’t affected my charters all that much.

The way my program has changed the most is that I have spent more time in Espiritu Santo Bay area than I normally do this time of year. The chief reason was not actually the fresh water runoff as much as the size of trout, or maybe I should say lack of size I had been catching on the reefs in San Antonio Bay. It seems the freshwater pushed the larger trout further into Espiritu Santo and Mesquite bays. After many trips of scratching for just so-so trout on the reefs, amidst lily pads and other debris, I decided I would make a few wades on the shorelines of Espiritu Santo for some reconnaissance. After our first wade I was convinced I wouldn’t leave this bay until Old Man Winter and the wicked wind he brings made me leave for more protected backwaters.

The quality and quantity of the trout we were catching was that good, and it really didn’t matter if you were a topwater chunker or a soft plastic guy – we all caught fish. Now granted this is only going to last so long but as of this writing I am still fishing Espiritu Santo when I have a group that like to wade. As far as staying in the boat, you had better point your boat towards any of Matagorda Island’s back lakes.

During December, no matter whether we might be fishing Espiritu Santo, San Antonio, or West Matagorda, our lure selections will all be based on the weather conditions for the day we are fishing. For shoreline wading we will lean heavily toward 4” Bass Assassin Sea Shads in Copperhead and Purple Chicken. My preferred jigheads for these baits are the 1/16 ounce from Bass Assassin.

If the weather and water conditions allow us to get out on the San Antonio reefs I will likely be passing out the same 4” Assassin Sea Shads as mentioned above.

If we have an extreme cold front that drops the water temps into the high-40s, which sometimes happens in December, I will be breaking out MirrOlure’s Corkys and MirrODines. During these abrupt changes in water temperature I typically find the best bite in deeper areas of the back lakes, especially the sloughs that connect the lakes to the bays.

Once the weather begins to moderate, usually by the second or third day, the water on the back lake flats has warmed sufficiently for bait and game fish to vacate their deeper refuges. Quite often we see them feeding with a vengeance when they first appear back on the flats, and those same Corkys and MirrOdine will be very effective.

If there is any one piece of equipment that is going to make a difference in your ability to catch fish in the colder months, I would say it would have to be your rod. I choose Waterloo because they are the most sensitive I have ever used. No matter if you prefer braid or mono line, it’s the rod that counts most in detecting subtle bites and setting the hook. Swing by the Waterloo Pro Shop and talk to Jimmy or Kolby, they can help you pick a rod that best suits the type of lures you like to throw most often.