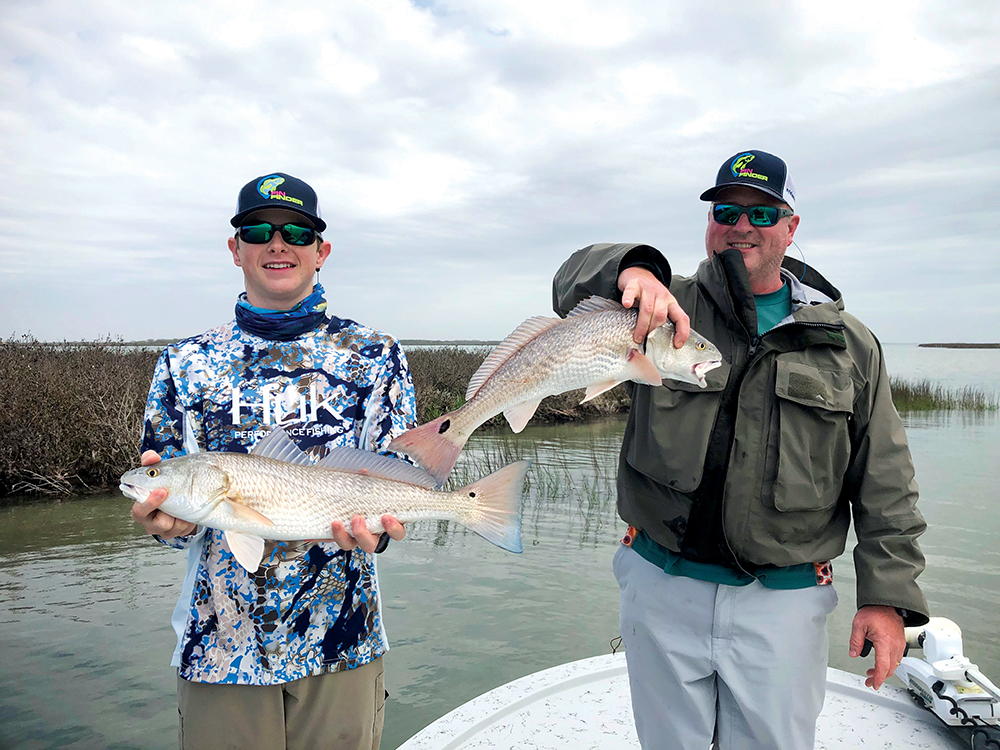 Robert and Travis Gilliland enjoying some redfish and flounder action.

Fishing in the POC-Seadrift area has been up and down for the last couple of weeks. Not so much because of the February freeze, it’s mostly because of the game Mother Nature plays with us every spring. It’s called the wind game. Although it helps aerate the water, the wind can cause our tides to fluctuate abnormally high or low, depending on the direction it’s coming from. While these tide fluctuations can definitely interfere with our daily fishing plans, I would say they are beneficial overall in that they bring mullet and menhaden into the bays from the gulf along with gamefish. Springtime is when I consistently prowl main bay shorelines stalking schools of menhaden and larger horse mullet, hoping to pluck unsuspecting trout or redfish from under the bait schools.

Cold fronts are still arriving weekly, which means the southeasterly flows that provide the best springtime fishing opportunity last only a few days. It is this back and forth wind pattern that is keeping me and my crew jumping from the south shoreline to the more protected north shorelines and back lakes during a blowing norther. Luckily the fronts are going to be arriving less frequently and with less strength as we move into June. Stable weather patterns make it easier to pattern fish and lends consistency to where they can be located.

During June you should be seeing more of my Shallow Sport X3 headed through Pass Cavallo to take a look at the surf. Anyone that knows me knows very well also knows that I love the surf. The fish are much more aggressive in the cooler Gulf water versus the bay, especially during the heat of summer. When the surf is too rough to fish safely I will fish as close to the passes as I can to intercept the tide runner trout that will be coming into the bay.

When fishing near the passes this time of year, I look for shorelines that have irregularities that will change the direction or flow of incoming or outgoing tides. Points jutting out from shorelines and reefs extending into the bay are the irregularities I am describing. A slough that connects a back lake area to the shoreline can be great also. Scattered grass and sandbars will do the same trick; they can all be productive structure. These irregularities are what the gamefish that you are targeting will use as ambush points to grab their next meal, and we in turn will use as focal points to target our gamefish.

When fishing these shorelines you will need to pay special attention to your surroundings. Are the baitfish hanging close to the banks or are they out deeper? Are there slicks popping up in certain areas? Are the menhaden and larger mullet daisy-chaining down the shorelines?

Once you start fishing and you have your target areas figured out, you will need to match your lure to the baitfish in the area you are fishing. If you have a lot of shad or larger mullet you could go with the MirrOlure MirrOdine XL; they come in many colors, and with chrome sides to add flash. MirrOlure also has the Soft-Dine XL which can certainly do the trick for you.

Bass Assassin 4” Sea Shads will almost always get the job done. I usually go with Magic Grass or Purple Chicken unless the water is gin clear, and that’s generally not going to be the case this time of year. I rig the Sea Shad on 1/16 ounce Assassin jigheads.

Another species that gets my attention while I am fishing for trout and redfish in the surf is tarpon, AKA Silver King. Years ago, up until about the early 2000s, we would chase tarpon schools and single tarpon all around the San Antonio and Espiritu Santo bay region. Sadly, we no longer see them coming into these bays, although we are occasionally still able to find them in West Matagorda Bay. Tarpon migrate north through our nearshore gulf waters and then back south toward Mexico in early fall. Tarpon fishing has grown in popularity during the past five years, and I have seen a dramatic increase in the number of anglers chasing them.

We use a wide variety of lures and natural baits to entice these Silver Kings to strike; my favorite is sight-casting a “Coon Pop” to tarpon rolling on the surface. Talk about a thrill! When they take the bait it feels like a large trout thumping the lure. But when you set the hook they are more like a freight train.