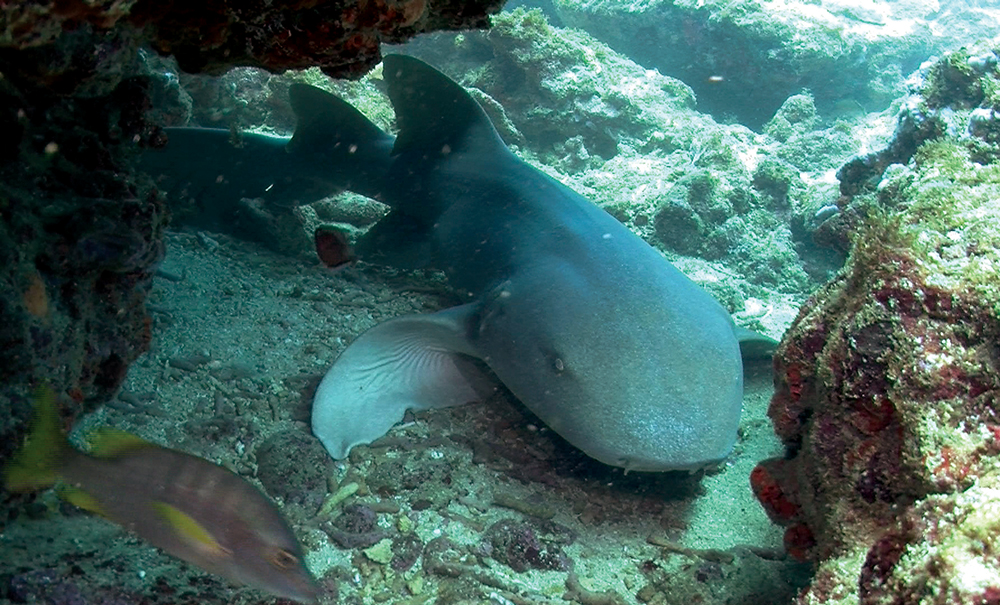 It’s definitely not qualified to care for hospital patients, so how did this barbel-faced bottom dweller get the name “nurse” shark? It’s an etymological mystery, but historians have their theories. Some believe it comes from the word nusse, an archaic term given to an unrelated family called catsharks. Others have suggested the name comes from the Old English term hurse which means “seafloor shark.” Or the name might simply come from the unusual sucking sound they make while hunting, which resembles the suckling of a nursing baby. All of these theories seem equally valid, so we may never know where the common name originated. But its scientific name, Ginglymostoma cirratum, is another matter. The shark's genus name Ginglymostoma means "hinged mouth" in Greek, while the species name cirratum means "curled ringlets" in Latin.

The nurse shark is famous for its docile nature. It is a distinct species from the grey nurse shark (a.k.a. sand tiger shark, Carcharias taurus) and the tawny nurse shark (Nebrius ferrugineus, another type of carpet shark). An adult nurse shark is light yellowish-brown to dark brown (though they may have the ability to slightly change color in response to their environment), with smooth skin, a broad head, an elongated tail fin, and rounded dorsal and pectoral fins. They also have two conspicuous barbels between the nostrils that they use to search for prey, and very small eyes. Adults don't normally have spots, but juveniles are covered in little black dots that fade as the sharks age. Females are slightly larger than males, averaging 7.5 to 9 feet in length and 165 to 230 pounds. Their long tails can reach a fourth of their total body length. This length allows for more energy-efficient swimming, which helps combat their slow metabolisms.

This species occurs in the Western Atlantic from Rhode Island down to southern Brazil; in the Eastern Atlantic from Cameroon to Gabon; in the Eastern Pacific from the southern Baja California to Peru; and around the islands of the Caribbean. Juveniles are mostly found on the bottom of shallow coral reefs, seagrass beds, and around mangrove islands, whereas older individuals typically reside in and around deeper reefs and rocky areas, where they tend to seek shelter in crevices and under ledges during the day and leave their shelter at night to feed in shallower areas. They live in tropical and subtropical waters around coastal shelves, from inshore to a depth of about 430 feet – but only to a depth of about 200 feet in the Gulf of Mexico. Generally, they’re found in waters less than 40 feet deep, though they will hunt in deeper waters if they have no choice. They show a strong preference for certain resting sites, repeatedly returning to the same spot to chill after hunting for food. Individuals tend to have small home ranges, and the species was considered non-migratory until in January 2018, Environmental Biology of Fishes published a 23-year nurse shark tracking study of 76 adult nurse sharks. The scientists behind it looked at a wild population near the Dry Tortugas (part of the Florida Keys). Tagging revealed that some of these fish stayed in the Keys throughout the year. However, others ventured as far north as the Tampa Bay area in between mating seasons, making nurse sharks “partially migratory.” That means some individuals within the species migrate, but others don't.

For certain sharks, lounging on the ocean floor is an impossibility. Species like the great white and the whale shark breathe by swimming nonstop; as they swim, water constantly flows through their open mouths and across their gills, supplying oxygen en route. If the shark stops moving for too long, that flow ceases and they can suffocate. However, nurse sharks are perfectly capable of breathing while resting on the sea floor. By facing against the current and using oral muscles to actively suck water into the mouth – called buccal pumping—nurse sharks can supply oxygen to their gills without needing to swim anywhere. Generally sluggish, nurse sharks spend most of their day resting in groups on the sea bottom or hidden under ledges, with up to 40 individuals piled on top of one another. It’s thought that they stay in these groups for protection purposes only, with very little dominance or hierarchy. Even when they do get up and move, they tend to only travel at about 1.5 mph. However, when they are hunting, they are capable of quick bursts of speed of 25 mph. Hunting occurs at night. They become more active, but also more solitary, wandering the waters alone.

Nurse sharks eat a variety of sea life, from sea snails, crustaceans, mollusks, squid, and sea urchins to bony fish. Most of their prey hangs out on the sea floor, and they catch them by slurping them into their mouths. A cavity within the throat generates a powerful suction, like a sort of bellows valve, that vacuums prey up into the nurse shark’s mouth, which is lined with rows of tiny, serrated, backward-curled teeth designed for crushing hard-shelled prey. Their teeth are constantly being replaced. New rows pop up towards the back and gradually push older ones forward until they fall out, like a conveyor belt. How long an individual row lasts depends on the season. During the winter, a nurse shark will acquire a fresh row of teeth every 50 to 70 days. But in the summer, that wait shortens to only 10 or 20 days.

Their method of hunting means a nurse shark will inevitably make an unmistakable “slurping” or sucking sound, unique to this species. They can generate enough pressure to suck a queen conch right out of its shell – among the highest recorded pressure of any aquatic vertebrate to date – and like many suction feeders, nurse sharks swallow their prey whole. Since their small mouths limit the size of prey (that can be swallowed whole), they sometimes engage in a suck-and-spit behavior and/or shake their head violently to reduce the size of their meal item. They are opportunistic predators, using their barbels (fleshy sense organs) to detect prey animals and disturb bottom sediment to uncover them, taking advantage of dormant fish which would otherwise be too fast for the sharks to catch. Since nurse sharks inhabit environments where food is in an abundance, they tend to have quite a varied diet. They’ve even been seen grazing on algae and coral. So they’re basically a typical couch potato – lying around and eating anything easily accessible.

Nurse sharks have few predators, but other large sharks – such as lemon, tiger, bull, and great hammerhead – do occasionally prey on them. Also, where nurse sharks and alligators are found together, the two species attack and eat each other.

The species is ovoviviparous, meaning the young develop in eggs and hatch within the female, and then are born. The young get their nutrition during development from the yolk (as opposed to an umbilical cord). During mating season, females will mate with multiple males. As in some other shark species, the male bites the female to hold her for mating. Since many males may attempt to mate with a female, it's not uncommon for a female nurse shark to bear numerous scars. Sometimes multiple males will attempt to mate with the same female simultaneously, resulting in violent shoving matches. Gestation typically lasts 5 to 6 months, and the female gives birth in summer to litters of 20 to 40 pups. A single batch of newborn pups may include the offspring of up to six different fathers. The young nurse sharks are born fully developed at about a foot long. Cannibalism between pups does occur, with the larger and stronger pups eating the runts. After giving birth, it takes another 18 months before the female produces enough eggs to successfully mate again. Nurse sharks exhibit mating site fidelity, returning to the same breeding grounds year after year. Males reach sexual maturity at 18 years; females 25 years. They live about 35 years in the wild. So a generation length is about 30 years.

Nurse sharks are an important species for shark research because they are robust and tolerate capture, handling, and tagging extremely well. Because they are inactive during the day and aren’t targeted by commercial fisheries (though some small operations hunt them for leather, and their livers are harvested for certain types of oils), nurse sharks are one of the most common species of shark that divers and snorkelers experience on reefs (within their range). Historically, other sharks were probably more common, but heavy fishing pressure has changed the reef community in many areas. Though they seem harmless while they lay about during the day, it is unwise to pet nurse sharks (or pull their tails). Some individuals have been known to bite swimmers who startled them awake.

They are currently listed as Vulnerable, with a decreasing population trend, in the IUCN Red List. In the Northwest and Western Central Atlantic, it is suspected that the nurse shark has undergone a population reduction of 20-29 percent over the past three generation lengths (90 years): in the Southwest Atlantic, a reduction of more than 80 percent; and in West Africa, a reduction of more than 30 percent. The bulk of the species’ distribution is in the Northwest/Western Central Atlantic and West Africa, so overall, this species is suspected to have undergone a population reduction of 30-49 percent in the past 90 years due to actual and potential exploitation levels as well as habitat loss and degradation.

Where I learned about nurse sharks, and you can too!