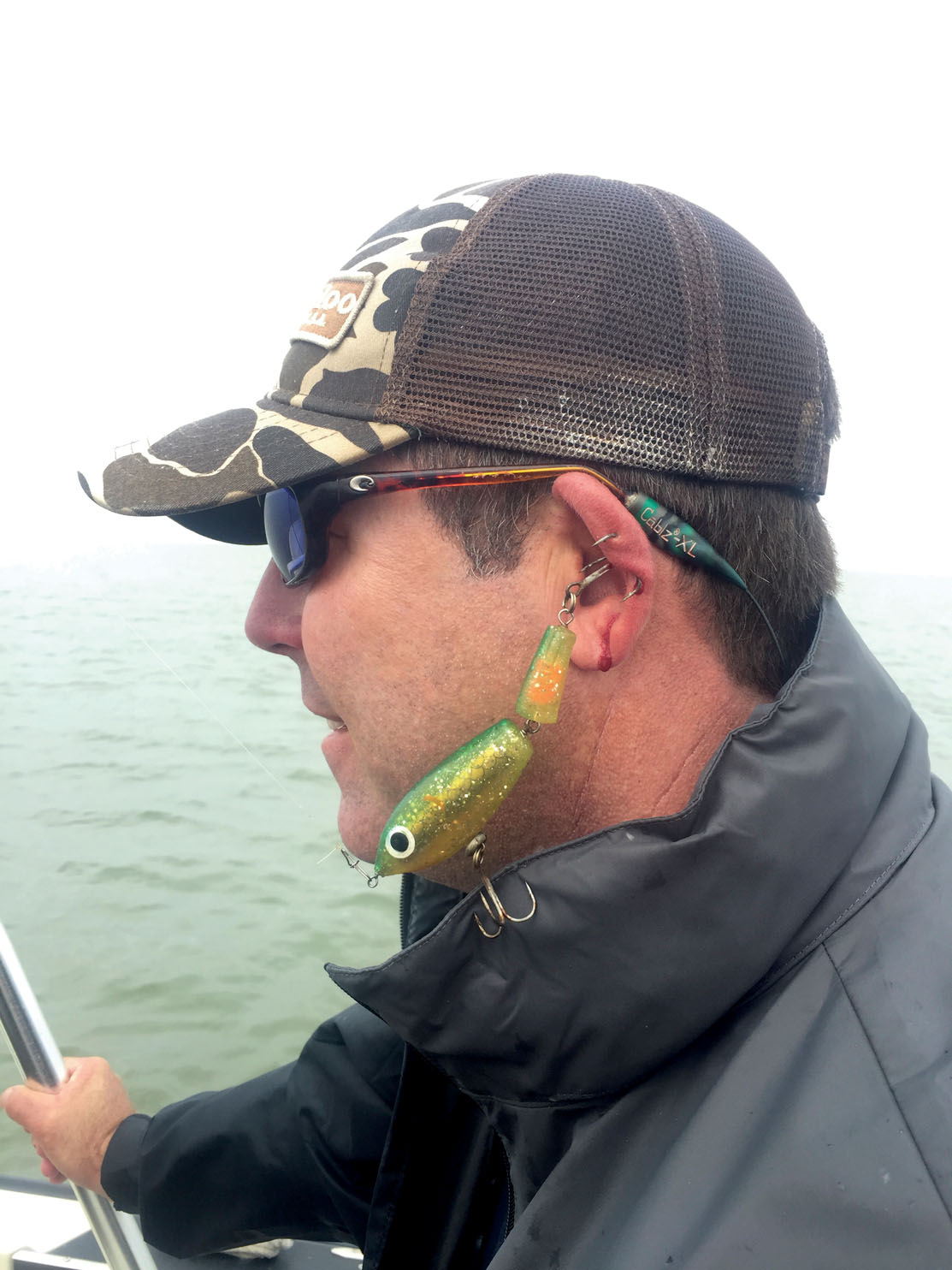 Captain Steve Hillman sporting impromptu “piercing” and fishing jewelry. You know it had to hurt.

The frigate bird is large, aggressive, and irritable. At least, that is my observation. It certainly is the opinion of one of my longtime fishing companions.

We were about 50 yards apart, wading with the wind, when a single frigate started circling above him. The big black bird with its thin wings and forked tail and hooked beak appeared curious, dipping and diving.

My friend poked his 9-foot fly rod at the hovering bird, more or less engaging in an aerial fencing match. The frigate continued ragging on him, swooping and swerving. He jabbed again and the low frigate got tangled in the loose fly line dangling from the tip.

The startled bird flared and the burst yanked the line up and away. The bonefish fly being properly held in the left hand ripped free and the No. 4 hook gaffed his index finger.

He bent over in pain as the frigate shook free and sailed off. The guide and I shuffled over. The point and barb were protruding through the top of the bloody finger – a nasty wound miles from help.

My stoic friend held steady and the guide wielded a pair of short, heavy fishing pliers. The pliers cut the exposed bend and it was a simple matter to push the hook back through the wound. Well, it looked simple enough to me.

Back at Ikari Lodge, first aid was administered and the finger healed with no complications. That was one of two barbings that occurred during the trip last January. The other happened when two fly anglers were casting simultaneously from a boat for milling schools of milkfish off the beachfront.

Two casters firing wind-blown loops at the same time is a dicey situation. One guy miscalculated his forward haul and planted the outgoing fly in the other guy's forearm. The point and barb were embedded in the flesh, so the guide used the string-jerk method to snatch the hook free.

The string jerk is a great procedure when the point and barb of a J-type hook are planted in firm meat. You loop a length of heavy line – fly line is excellent – around the bend, depress the shank by pressing down above the eye, and give a smart yank. Depressing the shank allows the point and barb to exit through the established wound channel. The technique works remarkably well, assuming you don't dither on the jerk.

I've been exceptionally lucky. Only once in 60 years of fishing do I recall receiving a serious barbing; that was at night while wading and fly casting for sea-run brown trout in Tierra del Fuego. Incidentally, if you want to get as far as possible from one of those Urgent Care Clinics, TDF is a fine place to start.

My backcast fell apart and the long-shanked woolly bugger streamer hook slammed into the top of my casting hand. One look with my headlamp and I started moaning and groaning. The clucking guide came over and used a loop of the 9-weight line to perform a skilled string jerk. I did not feel a thing – amazing.

Years ago, while fly-casting with another angler from a drift boat, his double haul whizzed past and the small No. 8 hook whapped into my ear and ripped straight through the lobe. The result looked like an ear piercing gone bad.

At least most flies are relatively small and tied on single hooks. Elongated plugs with two or three sets of flapping trebles increase the "Ouch!" risk, especially during a slippery hand-grabbing detail.

I've witnessed several nasty plug barbings, mostly while wading. I narrowly escaped one in the surf near San Luis Pass. I reached to grab a nice speck across the shoulders. A wave bumped in and the fish gave a frantic shake, planting the tip of the front treble of a 52M MirrOlure in my thumb. I clutched the trout and dropped low, reducing the abrupt weight against the hook, and was able to stabilize the fish and work the point free.

I am not bad-mouthing mullet-type plugs, as they are among the all-time trout catchers, but they do demand extra caution. For this reason, I tend to favor a spoon rigged with a single hook for serious work in breaking surf.

The proper surf spoon has superior ballistics for drilling into the prevailing onshore wind, and there's nothing dangling down during a fumbled grab (on the subject of dangling down, it's a rookie mistake for the waist-deep plugger to allow a strong fish to dive between spread legs).

When drifting across a bay, the typical center console permits two or even three anglers to cast with conventional tackle. This a safe enough, assuming all hands pay attention to backswings and no one attempts a side-arm across the inside of the boat.

If an excitable beginner (or careless old timer) whips a lure through harm's way, the breach immediately should be pointed out. As with gun safety, this is no time stand on polite manners.

"Chasing the birds" for school specks perhaps is most dangerous because all rods tend to cluster close for frantic rapid-fire casts into the kill zone. Deliberate drifting with bow-center-stern positions is more controlled.

Regardless of technique, wearing protective gear is smart whenever practical. A pair of wide-framed sunglasses with shatterproof lens should be mandatory for every coastal angler. You might not always need the glasses for spotting fish or cutting glare, but they might spare an eye from an errant hook.

For example, during the aforementioned Christmas Island expedition, I bent in shin-deep water to unhook a bonefish. I grabbed the leader several feet above the glum fish and reached with a pair of forceps for the fly.

The fish surged and the hook pulled. The No. 6 Gotcha shot straight back into my greedy face, smacking the right lens of the Salt Life shades. The payload bounced harmlessly. Good on ya, Zeiss, I thought. Things like that can happen in an instant, and the nearest qualified ophthalmologist probably was 1200 miles away, back in Honolulu.

Under windblown conditions or on a crowded boat, a foul weather parka with a hood might deflect a fly or lure whizzing in from behind. A hat with a wide brim also helps.

The angler most apt to self-destruct is the fly caster attempting to drive a loop into a gusting crosswind blowing from the rod side. I've whapped myself many times in the back of the hood or across the parka shoulders by being too lazy or cocky to switch to a backhand cast (keeping everything on the downwind side). Oh, no problem; I've got this drill wired and - Ouch!

Granted, the parka may not do much against an incoming Super Spook side-armed by a companion, but I submit it's better than a bare neck.

Barbings also can occur away from the water. When packing for a trip, you might reach hastily into an open tote bag and jam a finger into that can't-miss killer bait with its chemically sharpened razor trebles that you forgot to tuck into a plastic box.

The tackle tinkerer at home might drop a hook on the floor and find it later with a foot. On that note, the angler with young children or playful pets should be especially careful about leaving exposed lures or flies within reach. The gaudy baubles can attract more than fish.

Of course, mashing or cutting barbs can spare a lot of misery, and barbless hooks probably don't conspire for as many misses as the rookie might think. But the occasional fish will shake free. I lost a "double digit" bonefish in the Bahamas years ago thanks to a barbless hook – I watched in dismay as the whipped monster rooted through the turtle grass maybe 30 feet from the skiff.

Mashing barbs is most common on single-hooked lures and flies; seldom in my experience is it done with trebles. Too much hassle.

Regardless, one of the few things that all anglers share is the risk of getting barbed. Some stabs are minor annoyances while others can be trip busters and a few can be downright dangerous – and all can happen within an instant of inattention or bad luck or bizarre intervention (random frigate birds included).

Rare is the veteran angler who has not been barbed. Frankly, given all the hardware we sling about, I'm amazed it doesn't happen more often.