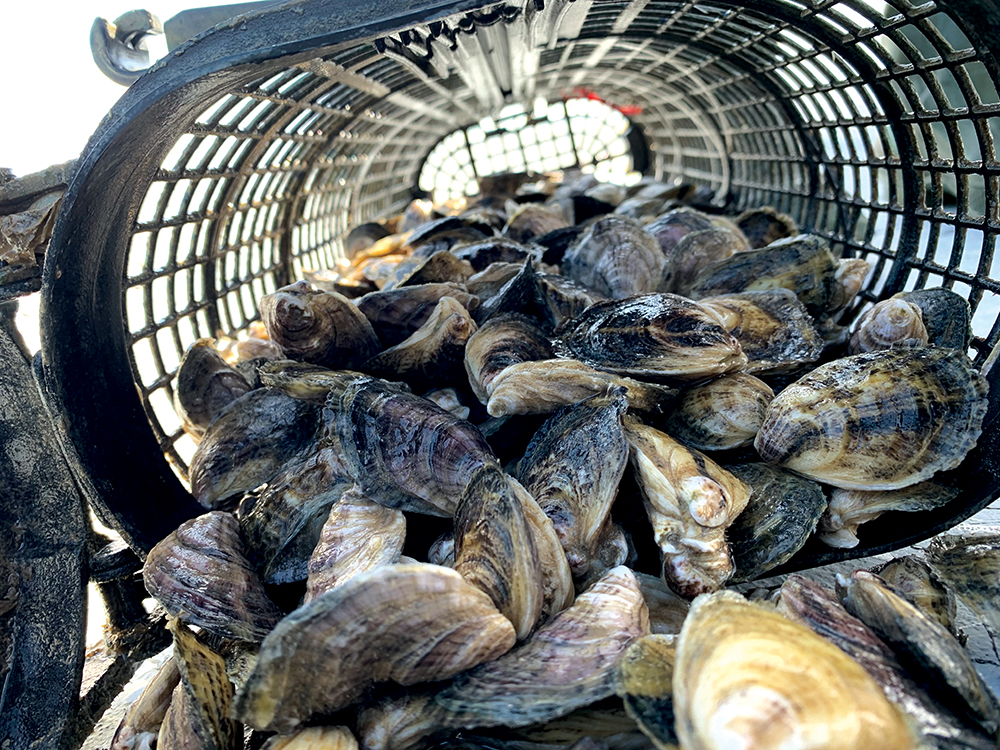 Oyster farming is coming to Texas!

It’s humbling to see how a small bivalve that fits in the palm of your hand has a disproportionately large influence on the culture, community, economy, and ecological resilience of our coast. Oysters are engrained in Texas culinary culture; there are festivals in their honor, and they make an appearance at coastal backyard barbeques, either baked, fried, or on the half shell. In the bays, these bivalves band together to create complex reefs teeming with life that provide shelter and food for the fish that Texas anglers love to chase. This living habitat supports not only recreational angling, but also the largest wild oyster fishery in the Gulf of Mexico; over 3.5 million pounds of meat was harvested in 2019 from public and private reefs in Texas, with an ex-vessel value of over $33 million. Some consider Texas the “last frontier” of wild oyster harvest as our oyster fishery is the last in the Gulf of Mexico to be supported almost entirely by wild natural reefs (only ~10% of oyster landings come from private reefs), but our wild oyster frontier is about to be settled by a new industry – oyster farming is coming to Texas!

This past year, Texas became the last state in the Gulf of Mexico to develop a Cultivated Oyster Mariculture (COM) industry.  This legislative effort is anticipated to vitalize the coastal economy by creating business opportunities for both oyster farmers and restaurants. Because oyster farmers have more control over oysters in cages than those on a wild reef, farmed oysters are often considered “boutique” for the half-shell market due to their carefully-cultivated taste, shape, size and appearance…and they’re sustainable! There is no way to know for certain if oyster farms will reduce harvest pressure on wild reefs or simply supplement it (that all depends on the demand), but either way, there will now be more options for Texas oyster lovers.

Luckily, being the last state to develop an oyster mariculture industry meant that Texas could lean on the lessons learned by the other coastal states. We started by looking at what had already been successful (or not) across the country. Texas is also unique in many ways, which has required deviating from the status quo to create our own unique program. The Texas Parks and Wildlife Department (TPWD) worked with a task force comprised of local industry members, academics, and conservation groups to design a program that is informed by the best available science as well as public input.

There was a lot to figure out in just one year, from minutia such as creating the necessary paperwork trail of forms, to major considerations such as ensuring natural resources like habitats and nesting birds will not be negatively impacted by the addition of farms. Protecting the genetics of our unique wild Texas oysters was also a priority, as Texas is the only state in the Gulf of Mexico that is home to two genetic populations of oysters, one of which has evolved to survive in the unique high-salinity environments of our southern estuaries. Importation of oysters has never been allowed in Texas, but in the absence of Texas oyster hatcheries, TPWD had to create new protocols for safely importing oyster seed to new oyster farmers. We also considered issues such as marine debris, and a portion of the fees generated from this program will be dedicated to cleaning up abandoned or lost gear.

Unfortunately, one year was not quite enough time to streamline the permitting process. As it stands now, applicants must coordinate with up to six state and federal agencies to obtain all of the permits necessary for an oyster farm. But this will not be a permanent challenge – TPWD has already begun creating an online permit application portal that should be live by the end of 2021. TPWD staff are also more than happy to walk applicants through the permitting process so it can be a little less daunting.

So, you want to start an oyster farm…

If you’re interested in starting your own oyster farm, the first step is to schedule a meeting with a TPWD biologist who will not only help guide you through the permitting process and program rules, but also help you review the farm site with a Spatial Planning Tool to avoid conflicts that may trigger the rejection of the site.

Picking a site for an oyster farm can be one of the most critical steps of the process. The location of the farm can be the difference between success and failure; the water quality, salinity, temperature, and flow at the site can influence not only how quickly oysters grow, but if they even survive at all. Sites should also avoid conflict with wadefishing, navigation, oil and gas infrastructure, and private property (especially since all of these competing users will have an opportunity to provide public comment on each proposed farm). You will also have to complete a natural resources survey to ensure your site will have no negative impact to sensitive habitats, such as seagrasses, wild oysters, wetlands, and bird rookeries. While our bays may appear to be large expanses of open water with unending potential for oyster farms, the usable area is rapidly reduced when you look at all these considerations.

To the benefit of potential farmers, Texas Sea Grant has recently hired an Oyster Aquaculture Specialist who can provide tips for successful site selection as well as best practices for oyster farm operation. They can help guide you through technical questions, such as what type of gear to purchase, how many oysters to stock for your targeted production, and how and where oysters should be grown for a targeted taste and appearance. Sea Grant also provides training opportunities to see first-hand how the gear is operated so you know exactly what to expect on your oyster farm.

Once you have selected a site, completed the natural resource survey, and developed an operations plan, the permitting process begins! It is anticipated that acquiring all permits required by all state and federal agencies may take up to six months.

At the time of this article, we have had two official applications (one 8-acre farm in Copano Bay and one 10-acre farm in East Galveston Bay), with about eight more “coming soon”. We expect these oysters to make an appearance in restaurants within a year. No one knows for sure how many people will apply for oyster farms in Texas, but the interest has been steadily growing. States with more established programs, such as Virginia and North Carolina, saw exponential growth over time from under 10 farms in the first few years to over 40 farms within a decade. Only time will tell how this industry will grow in Texas, but given our Texas-sized passion for oysters, we wouldn’t be surprised to see a Texas-sized oyster mariculture industry.

Check our website for more information about the program, including public meetings and proposed farms near you.