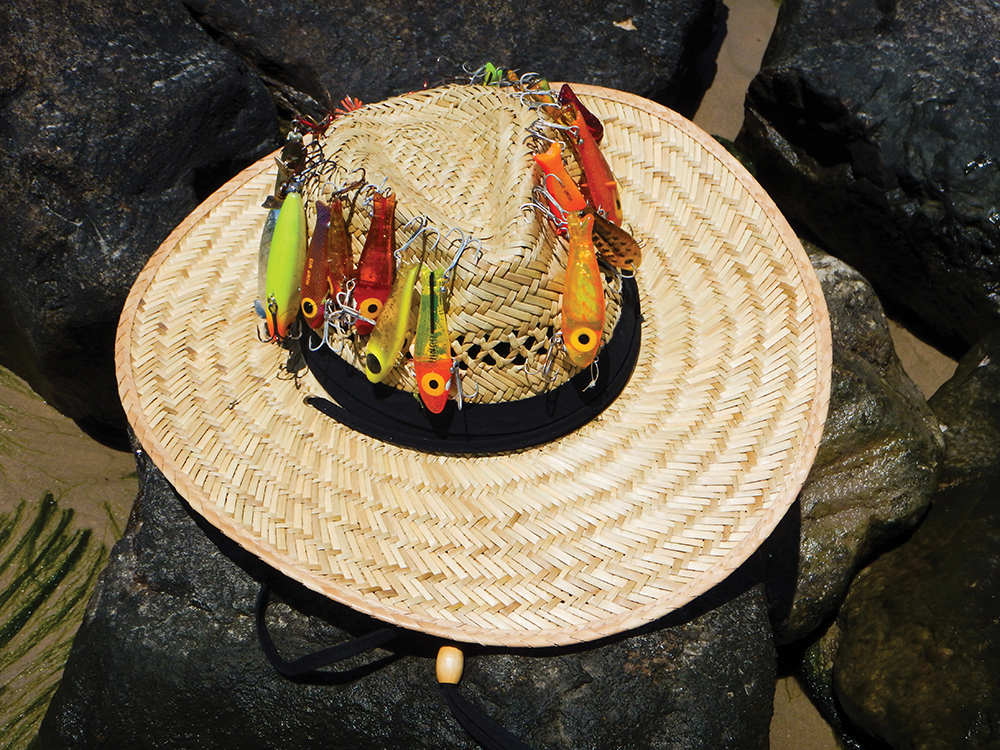 The old man always fished alone. During the spring and summer of 1966 several school friends and I often waded a flat on lower West Galveston Bay behind San Luis Pass. On the mediocre days of gusting wind and marginal water clarity we never saw him.

But when the wind was light and the tide was right, flowing rich with promise, he was there – a tiny stick figure shuffling slowly amid the vast sparkle.

He was a plugger. He used only lures for speckled trout and redfish, and we were fascinated by his game. We passed him several times, coming and going on the beach. He was tall and lanky and we agreed he was pretty spry for an old geezer. He would nod and we would nod. His name was Frank – “Mr. Frank" to us. We were too intimidated to say much.

He waded in faded khakis and a long-sleeved cotton shirt. A large straw hat was cinched with a neck cord against the prevailing breeze. A jaunty red bandana protected his gobbler throat from the glare. He had silvery hair and bushy eyebrows and crinkly ears, and his leathery face was smeared with sun oil and white zinc oxide paste.

The loose weave of the floppy hat crown bristled with colorful lures – “killer baits," all. They were pinned through the thick straw like campaign medals – hard plastic plugs such as Bingos, Humps, and MirrOlures, and metal spoons of silver and gold, mostly Johnson Sprites, Tony Accettas and Dixie Jets. Nobody back then knew what a soft-plastic tail was.

The old man used a long two-handed fiberglass rod and a little Shakespeare Sportcast reel. The well-oiled reel, like the well-oiled angler, was a throwback. The light, fast narrow-framed model was a go-to choice during the early 1950s for serious Texas waders – a high-performance reel mostly forgotten now, but elegant in its compact simplicity.

The Sportcast had a stainless steel frame with a marbled cream-colored plastic spacer on the right sideplate. The trim handle knobs were molded from a similar opaque plastic. It featured a smooth levelwind mechanism but offered no freespool or anti-reverse or star drag.

Stripped of these gadgets, the Sportcast weighed about seven ounces. It typically was spooled with 10- to 12-pound braided line. And it typically was in the hands of a specialist. Most inshore anglers during the pre-Ambassadeur "Red Reel" era used larger direct-drive reels with heavier lines.

Top-tier examples were the Shakespeare President and the Pflueger Supreme. These were go-to choices for casting live shrimp under popping corks, or for rough-and-tumble fishing from the jetties or in the surf.

But the bayshore waders casting lures increasingly favored the finesse of a lighter touch. And the tuned casting outfit with 1/4- to 1/2-ounce lures was well-suited for the murky "trout green" tides of the upper and middle Texas coast.

The old man wore a leather belt fitted with a molded piggy-back sheath for a fillet knife and a pair of needle-nose pliers. A metal stringer clip was riveted into place. When he donned the hat and buckled the belt like a high tide gunslinger we knew we were looking at a purist.

He showed the power and beauty of using an "educated thumb" to casually lay the long casts across open water. The whippy rod would flex behind a fluid stroke of hands and forearms, and the bright flicker of lure would spring from the tip and arc like a well-driven golf ball. Quick spray would puff from the spool and the spinning handle would blur. Each cast was an unencumbered flight of fancy, the essence of free spirit.

We were potlickers but we were learning. We suffered bad casts and backlashes but waded with the determination that comes from dedicated practice. Regardless of reel and regardless of era, those clean, mean levelwind casts must be earned; promotional hype aside, they do not always come guaranteed out of the box.

The old man would play a bucking, boiling trout slowly, working it in a wide circle and keeping it well away until it was tired and manageable. The struggle was a delicate give-and-take, with the poised thumb feathering the spool during the bursts of "give."

Then he would glide the fish back and forth, checking the lure and hook placement. The speck would slide on its side, head lifted against the bend of the elevated rod tip, and a brown knuckly hand would clamp across the shoulder, just behind the flared gill plates. He rarely missed a grab.

He sometimes held a good trout at arm's length and turned it slowly to admire the slim profile and black-spotted hues of silver and green and lavender. He was correct in this silent tribute. He knew that a  freshly minted trout with a gaudy plug pinned to its jaw is one of the most beautiful sights in all of angling.

He trailed a 10-foot cord stringer with a cork knotted to the end. The green cord was heavy, trailing straight without twisting and tangling against moving current and tugging fish. He used a big slip knot that would release the cork and allow strung fish to slide off the far end. This economy of effort only reaffirmed his excellence.

Our cheap nylon stringers were too thin; on the occasions when we caught enough fish to matter, they invariably would wrap into terrible knots.

One morning when the current was pouring green through the guts behind the pass, we hit a magic tide. We caught 10 or 12 solid specks apiece, mostly on chrome Tony 5Hs with yellow bucktails. Several were legitimate sows in the four- to five-pound class. We never had done better.

The late-morning sun was hot when we quit, wading in against the weight of our stringers. The shallows were active with life. Pods of finger mullet and tracers of minnows scattered ahead of our steps. Several large blue crabs scuttled sideways, waving big pincers, and, once, a plate-sized brownish-yellow stingray fluttered from the sand. Laughing gulls wheeled overhead, clamoring, and black-and-white skimmers raked with red bills across the shallows. It felt supremely good to be a part of it all, to glance back at the twisting, flashing saltwater bounty.

Approaching in the distance was the lone silhouette. The broad straw hat was unmistakable. The old man was leaning forward, shuffling slowly with the long rod over his shoulder. We stalled, keen to strut our stuff.

He pushed close and we stared in shock and awe. He was towing 10 feet of trout.

Gorgeous sows filled the stringer and the largest topped six or seven pounds. A scarred Bingo was hooked to the little reel. The plug was translucent yellowish green, with a red head and large painted eyes.

I shook my head and smiled – a Gulf Coast classic on either end of the line.

Not long after, the old man was gone. At least, we never saw him again.

I still think of him. Alarmingly, from my aged vantage, I'm probably older now than he was then. I used to wonder why he waded alone but now I know: That was his special spot and he enjoyed the simplicity and solitude. He could fish at his pace and maybe reflect at his pace.

Many things have changed since that summer. For starters, following decades of struggle, we have functional bag and size limits on the fish that matter. Catch-and-release is SOP on big trout. At least, it should be.

And the trappings of inshore angling have evolved. We have faster, smoother rods and faster, smoother reels, and thinner, stronger lines – and any number of must-have, can't-miss soft plastic baits. Not to mention custom shallow-water boats and sophisticated electronics.

Almost nobody wears a simple straw hat festooned with lures. And almost nobody has a hand-tooled saddle leather wading belt, dark and stiff and cracked from decades of use.

But I do. It's always satisfying to don the bonnet and strap the belt. And I have special fondness for chunking the old "hard" lures – the Texas plugs, the Bingos and such. They worked then; they work now. Squiggly plastic tails are hugely effective, no question, but they are boring – unpleasant to handle and utterly lacking in style points.

I suppose this stubborn stance is a tribute to the old man – to his generation of "old salts." They carried themselves with casual grace and confidence, with the pride of doing it right. The hat, especially, was a signature statement for wading and plugging. It was their school of fishing, the one that now is so popular and refined on today's tides.

I would like to think that the old man saw in our fumbling efforts a desire to pick up the light rods and fast reels and bright lures and move ahead into the next green tide. If so, he was right.

We never knew his last name. It was enough to know that Mr. Frank with his straw hat was an original Texas plugger.