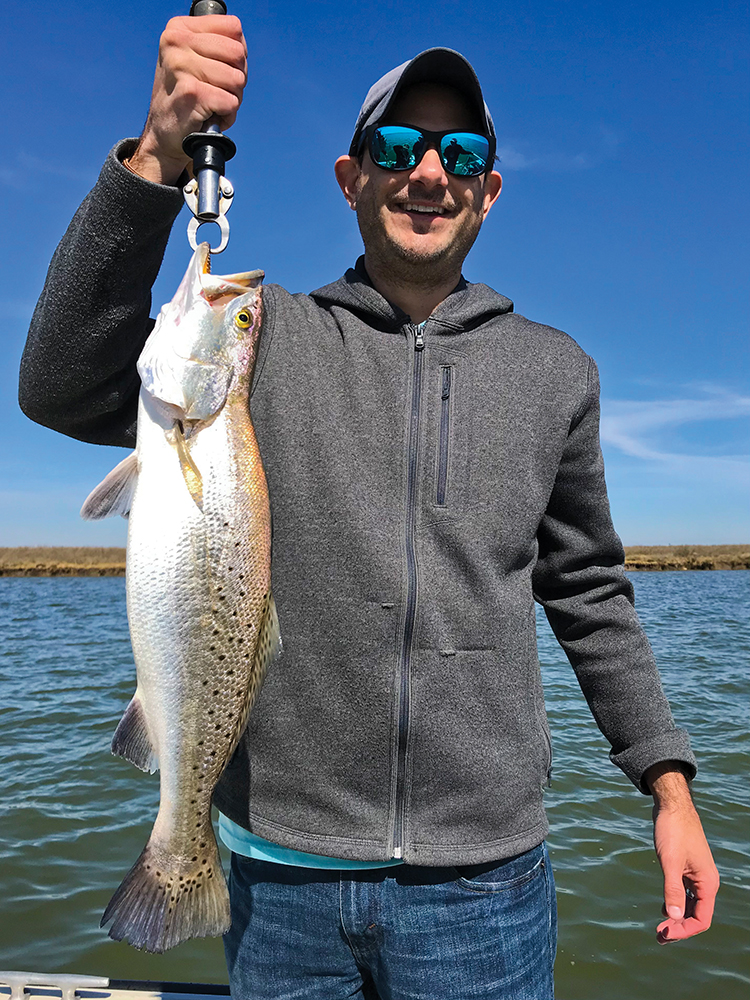 Xavier Chapa released this nice trout that was mingling amongst some reds and flounder over some shallow clusters of oysters.

My clients and I fish from six to eight hours most days. Obviously, there are exceptions, such as the other day when we waded for over nine hours in some challenging conditions trying to make magic happen. I don’t think even Harry Houdini could’ve helped us in a 25 mph northeast wind, high barometric pressure, and super low tides on that particular day. Regardless of the length of our trips, most customers with whom I share my boat take advantage of the time to make observations and ask plenty of questions. These questions vary widely depending upon age and skill level and I very much appreciate all of them. I only have so much space for this article so here are a few I’ve been asked recently.

Why do we seem to catch so many undersized specks these days?

It seems like we say the same thing every year in the recent past years. “Man! This is a great sign! We should have a helluva population of keeper trout next year with all of these little ones we’re catching right now!” The reality is that when these trout reach legal size the vast majority of them get harvested due to increased fishing pressure. Of course there are other factors that have contributed in recent years such as the flushing of the Galveston Bay Complex from massive Hurricane Harvey floods. Our bays have been full of undersized trout ever since.

Harvesting high numbers of barely legal trout every year will never give us the opportunity to grow better numbers of trophy trout. Furthermore, Mother Nature has to allow those fish to stay in our system for more than just a few years. Think about it. The floods from Harvey were just 3 ½ years ago. Does anyone want to guess the average length of a three year old male spotted seatrout in Texas waters? The Texas Parks and Wildlife Department says that a three year old male is about 17 inches long. Females reach this length in 2 years.

To me the math is simple.  Leave more to grow and eventually have higher numbers of larger trout, not to mention the biomass enhancement in spawning. It’s the same reason we don’t harvest young bucks with good genetics on our ranch. The potential for trophies in our deer herd would decrease dramatically and there would be little incentive to hunt. Who would want to drive all the way down to South Texas to sit in a blind to watch four and six point bucks? In a similar way, it’s hard to get excited about catching a bunch of pencil trout.

It seems like we mostly catch the majority of our fish in just a few spots. Why is that?

Prior to Hurricane Ike, Galveston Bay had roughly 24,000 acres of live oyster reefs.  While various seagrasses definitely offer more than suitable habitat in certain areas of our bay, they pale in comparison to live oyster reefs. I’ve written about it many times but I continue to get asked the same questions regarding loss of habitat. Ike silted over more than 50% of those live reefs. That was almost thirteen years ago.

In the meantime we’ve experience floods, droughts and predation, not to mention ever-increasing pressure from harvesters trying to makes ends meet. The end result is similar to what we’ve been faced with on the trout scene – there just doesn’t seem to be enough to go around. In simple terms, with fewer live reefs there are fewer areas to attract schools of specks. I could fill up at least two pages of this magazine by listing places we used to catch trout but no longer can because the habitat is gone.

Why do you kill the big motor so far away from where we’re fishing?

I can’t begin to count how many times I turn the key off and clients are already casting.  I have to politely ask them to hold their casts as I troll into the fishing area from 80 or 100 yards away. I’ve seen so many boats plow into the area they plan to fish while throwing a giant wake, and then immediately just start casting. These kinds of anglers are the ones who ruin it for themselves and everyone around them. Stealth is the name of the game when targeting trout, especially the larger ones.

How do you know when to stay or leave?

Knowing when to stay and when to leave a spot has to be one of the most asked questions through the years. So here’s my thought process. Chances are that we are fishing a particular area because we’ve been catching fish there. So, here we are on our spot. Why are they not biting? Or, could it be they left? Maybe it’s time to head elsewhere – not so fast.

If we are getting numerous subtle bites but very few hook-ups this tells us that those fish are still there but they’re just not ready to feed aggressively. Their presence can sometimes be further confirmed by observing slicks and bait in the area. It’s definitely best to wait them out especially if there’s an upcoming tide change or solunar feeding period approaching.

If we’re getting very few bites but the fish are hammering our lures than that generally tells me that there are only a few fish in that particular spot. Then we have to weigh our options. Do we go try to find greener pastures or do we grind it out for the few (we think) that are there? Everyone always says, “Never leave fish to find fish,” but no one ever quantified it.

For a more in depth perspective on this subject please refer to my September 2016 article titled Stay Put or Move? in this magazine. (www.texassaltwaterfishingmagazine.com).

How close is too close with regards to other fishermen?

This question doesn’t have a simple answer and common sense plays a major role here. I’ve had other anglers ask me at the marina, “Man. Did I get too close to you today?” or “I hope I didn’t crowd you.” It should go without saying that if someone feels compelled to ask that question then they were most likely too close. However, it sometimes depends upon circumstances as well as the area we’re fishing.

I don’t fish the Galveston Jetties much anymore but when I did it wasn’t uncommon to have another boat 50 or 60 yards from us. We would all be anchored while throwing against the rocks. Everyone had fun and everyone caught fish. No problem.

Now here’s a completely different scenario. We are wading a shoreline with the wind at our backs while methodically working our way toward the mouth of a non-navigable marsh drain and a group of fishermen pulls in within 100 yards downwind of us and jumps out. This is blatantly wrong but it happens more than we would like.

Or say we’re drifting a mid-bay oyster reef and find a small set of trout slicks to line up on. We set our drift based upon the wind, current, and the size of the slick(s). Then, out of nowhere, another boat motors in between us and the slicks. This is really less of a distance issue and more of a bad etiquette issue. I’ve seen folks really push the envelope, especially on tough days when not everyone is catching. We all have to use our best judgement when it comes to these issues.

In addition, we should attempt to politely educate those who did something stupid because sometimes folks simply just don’t know. We can usually differentiate between the ones who know better and the ones who don’t. If I’m clearly trolling to a school of trout working under birds and another “guide” motors in between me and the group of birds then he obviously knows better. He’s probably struggling that day so he’s convinced himself that it’s okay to practice poor etiquette as long as it results in fish on the cleaning table for his paying customers. In another instance, if a family who probably doesn’t get out on the water but just a few times a year ends up drifting a little too close to me on a reef because they don’t have a trolling motor then I might politely offer advice on how to better understand how the current and/or wind affects their drift.

If there’s one thing you could change about the guiding industry what would it be?

I would like to see the image of our industry improve. It’s time for a facelift. Many of the things we promoted (intentionally or unintentionally) for years are no longer needed or wanted. It’s time to clean things up a bit. A steady diet of piles of dead stuff on social media isn’t what I would call a good representation of our industry, especially given some of the challenges we’re faced with these days. It sends the wrong message.

Promoting more catch and release is a good place to start. By the way, I’m looking in the mirror when I offer these opinions and suggestions. Just log onto certain fishing forums and you’ll read things like, “Guides are keeping limits every day and that is the problem” or “I know guides who are running two trips a day and that’s just not right!” I’m not saying both of these examples are necessarily true but that seems to be the perception of many.

I would love to see a higher level of professionalism among charter captains (and recreational anglers) in addition to less animosity and smaller egos. I want to be proud of the industry of which I’m a part. We can do better and should do better.


Galveston Trout – Waiting for the switch to flip!