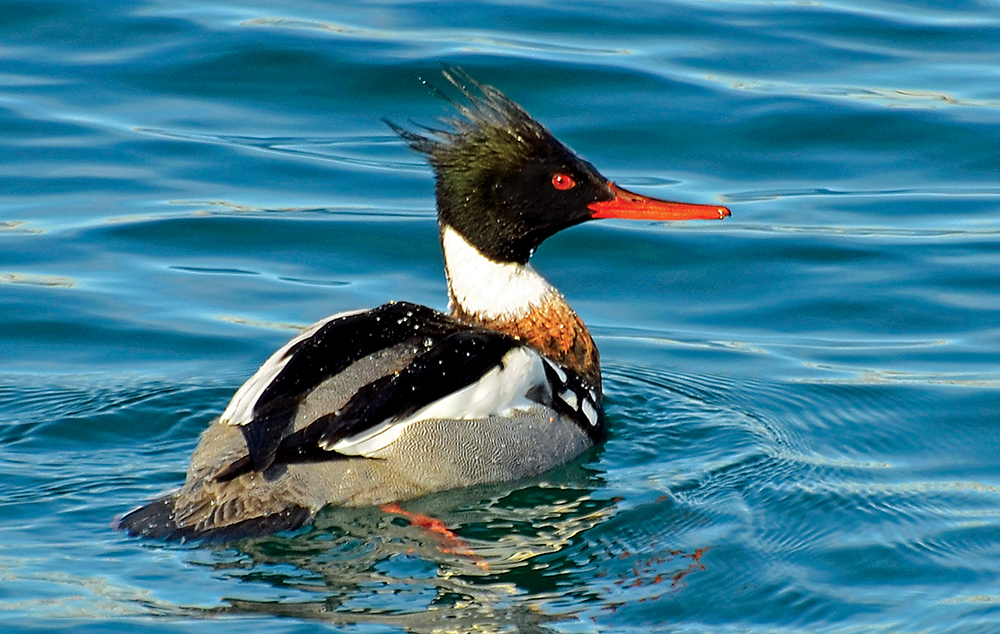 A male merganser on the St. Clair River in Port Huron, Michigan. Photo by Rodney Campbell. Licensed by CC BY 2.0.

If it looks like a duck, and quacks like a duck, we have at least to consider the possibility that we have a small aquatic bird of the family Anatidae on our hands.
~ Douglas Adams

Mergus serrator is a shaggy-headed diving duck. Also known as a sawbill, the merganser’s long, thin bill sports tiny serrations that it uses to keep hold of slippery prey. Its genus and species name reflect this description: Mergus, from the Latin mergo, meaning “to dive” and serrator, from the Latin serra, meaning “saw.” Superficially, this species is quite similar to the common merganser. However, the red-breasted merganser nests farther north (on the ground) and winters mostly on salt water, while the common winters mostly on fresh water and nests in cavities. One of the red-breasted merganser's notable features is a ruffled double crest. Both male and female have a crest. Breeding males have metallic-green heads, a striking white neck band and wing patches, deep red eyes and bill, a black back and black-striped rump, and a reddish, black-speckled breast, from which they derive their common name. Steel-gray sides create a distinct contrast with the white belly. Females, non-breeding males, and immature mergansers are dusky gray overall with cinnamon-brown heads, dingy white breasts, lightly mottled gray backs and sides, and inconspicuous white eye rings. The bill and legs are reddish-orange, and the bill has a black tip. Males are larger than females. Lengths range from 20 to 25 inches (wingspan 26 to 29 inches) and weights from 1.75 to 3 pounds. In flight, both sexes have a prominent white lower wing panel. The small head, slender neck, and tapered body give the merganser a streamlined appearance in the air. They often sit low in the water and have a profile similar to a loon at a distance, but with a much thinner bill. Females and non-breeding males can be distinguished from the common merganser by a discrepancy in the throat coloration: the white on red-breasted throats fades to brown near the head, while the border between white and brown on common throats is more sharply defined. Also, you’re more likely to find red-breasted mergansers on salt water than commons.

Winter months are the best time to look for a red-breasted merganser, when they are fairly common along the Gulf Coast. Though they can be found both inshore and offshore – and frequent sheltered estuaries, bays, and brackish lagoons – they show a preference for clear, shallow waters not affected by heavy wave action. In North America, this duck is a medium- to short-distance migrant, moving south to winter along coasts down to northern Mexico and the Florida Keys. They typically migrate in small flocks of 5 to 15, though in their fall migration, they may gather in large flocks up to 15,000. Coastal flights occur during the day and inland flights at night. Their range extends both farther north during breeding season and farther south during winter than the other two American mergansers, the common and the hooded. Red-breasted mergansers are among the fastest flying ducks, clocking speeds over 80 miles per hour. But to get airborne, they need a running start. Their legs are positioned near their rear making it difficult to walk on land, but are an asset for their highly aquatic lifestyle. They can forage underwater for nearly a minute and dive up to 30 feet. Reds are highly social and typically seen in groups. They do not defend territories, even during the breeding season, and commonly associate with other birds, both in feeding and nesting areas.

Red-breasted mergansers spend about 50% of their waking hours in foraging activities. They eat a wide variety of fish and fish eggs, occasionally capturing worms, crustaceans, and insects as well. While they seem to prefer foraging in shallower water, they’ll hunt wherever prey is abundant, using a variety of feeding strategies, including diving solo in search of prey, diving in formation to herd schooling fish such as herring, and swimming with their eyes just below the surface, as if they were snorkeling. Reds need to eat 15 to 20 fish per day, which means they need to dive underwater approximately 250 to 300 times per day, or forage for 4 to 5 hours, to meet their energy needs. Several bird species take advantage of the reds’ cooperative hunting strategies. Snowy egrets, Bonaparte's, and ring-billed gulls will wait at the surface to grab fish scared up by merganser foraging.

Breeding occurs in boreal forests on freshwater and saltwater wetlands in Canada and Alaska. Reds are seasonally monogamous, for the most part, but extra-pair copulations can be frequent. Pairs may form as early as November, but most pair bonds form during spring migration, starting in March. They are relatively late breeders. Mated pairs arrive on the breeding grounds in May, lay eggs in early June (in the northernmost portions of the breeding range); the ducklings hatch in July and fledge in September/October. Females lay around 9 olive-buff eggs, laying one egg every other day. Sometimes they lay eggs in each other’s nests, and occasionally in the nests of other duck species. They begin to incubate the eggs when the last egg is laid, so the ducklings hatch synchronously. Incubation is by the female only, and lasts 29 to 35 days. Males abandon both partner and nest as soon as incubation begins, and head to secluded waters to molt their feathers before migrating south. Females molt near the nest. Within a day after the eggs hatch, the female leads the ducklings to water, where they feed themselves. Two or more broods may join together, tended by one or more adult females, but the ducklings are left on their own within a few weeks. They are capable of flight about two months after hatching. Like many animals, most red-breasted merganser young do not survive through their first year. Up to 50% of ducklings die from exposure to cold weather, another 25% are preyed on by ravens, gulls, jaegers, mink, etc. It is even thought that only about 50% of adults survive migration and winter to breed the following year. Most red-breasted mergansers mate for the first time in their third year, although they acquire breeding plumage in their second year. The oldest recorded red was a female, at least 9 years, 6 months old when she was shot in Alaska, the same state where she had been banded. **Fun Fact: Only about 3% of bird species have a penis. Mergansers belong to the family Anatidae – a water bird family that includes, ducks, geese, and swans) – which makes up a large portion of that 3%. Most anatids are adapted for copulation on the water, only.

Red-breasted mergansers are sometimes attracted to fish hatcheries and other commercial fish raising programs, as well as important salmon spawning streams. They are sometimes persecuted by owners of fish farms, who claim that they deplete fish stocks. They are also frequently caught and drowned in fishing nets, along with other diving ducks. Though declines in North American populations have been noted, they are listed as Least Concern on the IUCN Red List, and their populations were stable between 1966 and 2015, according to the best estimates of the North American Breeding Bird Survey (although the species’ northern breeding grounds are partially outside of the survey’s coverage area).

Where I learned about red-breasted mergansers, and you can too!

The Cornell Lab | All About Birds
www.allaboutbirds.org/guide/Red-breasted_Merganser/overview

A Minute of Wildlife