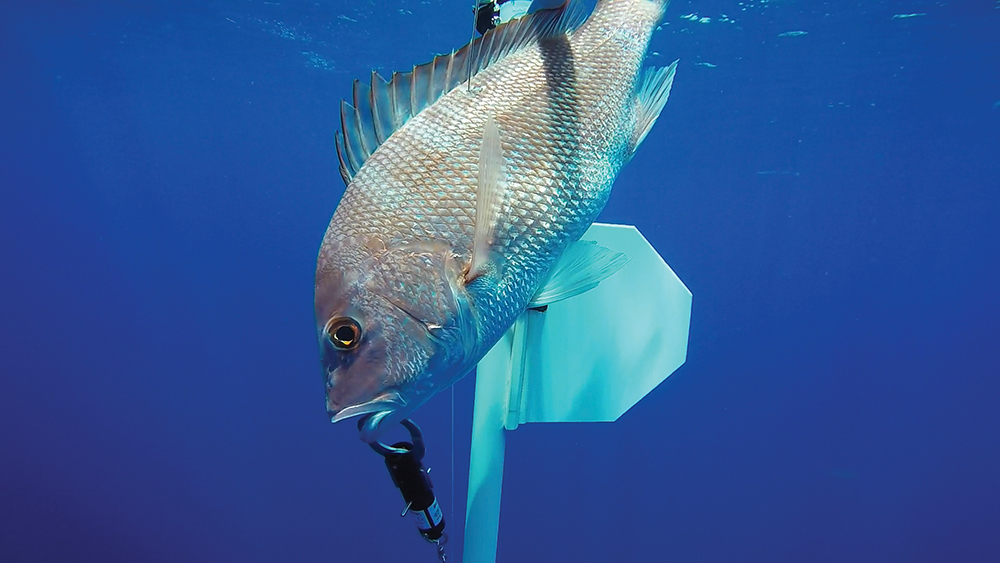 A Red Snapper being released using a SeaQualizer, in accordance with the newly passed Descend Act.

There’s a famous saying from Benjamin Franklin that, “nothing in this world is certain except death and taxes,” but the controversy around Red Snapper management in Gulf of Mexico federal waters could probably be added to that list. Between derby-style commercial seasons prior to implementation of the individual fishing quota (IFQ) program, and recreational seasons that lasted close to the time a person can survive without water, both sectors of fishermen have had their share of outrage. Thankfully, it seems as though we are on a path of resolution, where anglers are seeing more days on the water with what seems to be plenty of fish to catch. Thanks to a collaborative effort of top fisheries scientists around the Gulf, the Great Red Snapper Count concluded that there are likely to be at least three times the number of Red Snapper than NOAA Fisheries previously estimated. The data from this study will be included in the upcoming Red Snapper stock assessment, which will ideally allow for an increase in the harvest quota for both sectors. But before we start talking about the future, let’s take a brief look at the past and see where we started.

The management of the species is separated into two sectors – commercial and recreational. Commercial fishermen have been harvesting Red Snapper for almost two centuries (since approximately the 1840s) and have been regulated since the 1980s. One of these regulations included only allowing fishermen to harvest Red Snapper for the first 10 days of the month in the spring and fall. However, in 2007, the commercial fishery went to an IFQ program, in which individual fishermen were given a share (quota) of the total allowable harvest based on their historical commercial trip ticket landings. This allowed fishermen with quota to fish at their discretion and limit the dangerous ‘derby’ fishery that was previously occurring. Currently, commercial fishermen report their landings electronically to their state and federal management groups.

The recreational fishery has also seen a multitude of management restrictions meant to help the species recover. Similar to the commercial fishery, size and seasonal limits have been used to help rebuild the population. However, recreational anglers were being forced into derby seasons when federal managers only opened federal waters for just over a week. Due to resounding support from private recreational anglers, each Gulf state is now in control of managing their own federal waters. While the federal government still dictates the allotted quota for each state (based on the proportion of historical landings estimated from each state’s creel program), a state can set individualized season and bag limits – as long as they ensure their harvest stays within the federal quota. Since this change in management, federal waters in Texas have been open for several months each year, showing that our state is more than capable of managing our regional stock.

So, what is the future of Red Snapper management? With TPWD working hard to provide our anglers maximum sustainable access to the fishery (in terms of days open) while still staying within the state’s quota, one way anglers can help is by using electronic reporting. And, as with everything else, there’s an app for that! Released for use in the private recreational fishery in 2015 by the Center for Sportfish Science and Conservation (also the lead of the Great Red Snapper Count), iSnapper was created to try and help TPWD gather landings data from anglers without being encountered by dockside creel agents. Through three simple steps anglers can submit their harvest and effort data for their trip.  When paired with TPWD creel surveys, reporting through iSnapper may allow for more accurate real-time quota monitoring. In fact, all five Gulf states have adopted some sort of electronic reporting system after hearing of its ease of use and the ability to rapidly receive and analyze data. These apps are helping state agencies keep their federal waters open for as many days as possible and reduce the possibility of an overage penalty.

In addition, iSnapper has built-in features that could help the fishery in other ways. As of January 13 this year, part of the Descend Act requires all anglers (both commercial and recreational) to possess a venting or descending tool and have it rigged and ready to use while fishing for reef fish. The hope is that by taking the time to properly release Red Snapper, we can increase their survival. In iSnapper, you can record the release method used as well as the fish’s condition upon release. With this additional data, fisheries managers might be able to better understand how many fish are surviving their trip to the surface. Another important feature available in the app is the socioeconomic survey. Knowing how far anglers are traveling from port, fishing depth, and approximate costs of fuel and tackle per trip can (1) help quantify the socioeconomic importance of the fishery and (2) be used to approximate depth zone fishing hot spots or refuges when compared to data from other studies (i.e., the Gulf-wide tagging study from the GRSC). As managers continue to observe the recovery of Texas’ Red Snapper stock, this secondary data will likely prove to be even more useful than previously thought.

For these reasons and more, start including iSnapper as part of your fishing experience. And to all you anglers trolling 50 miles offshore or poling a flats boat inshore, every common species in the Gulf is included in the app. If you catch it, you can report it! The great thing is that iSnapper is free and provides an easy and efficient way for anglers to do their part in improving access to this fishery. You can get involved by downloading and reporting your catch with iSnapper (www.iSnapper.org) today. We hope that with more anglers using the app to provide personal, real-time fishing data, we can minimize the controversy surrounding Red Snapper management in the coming years.