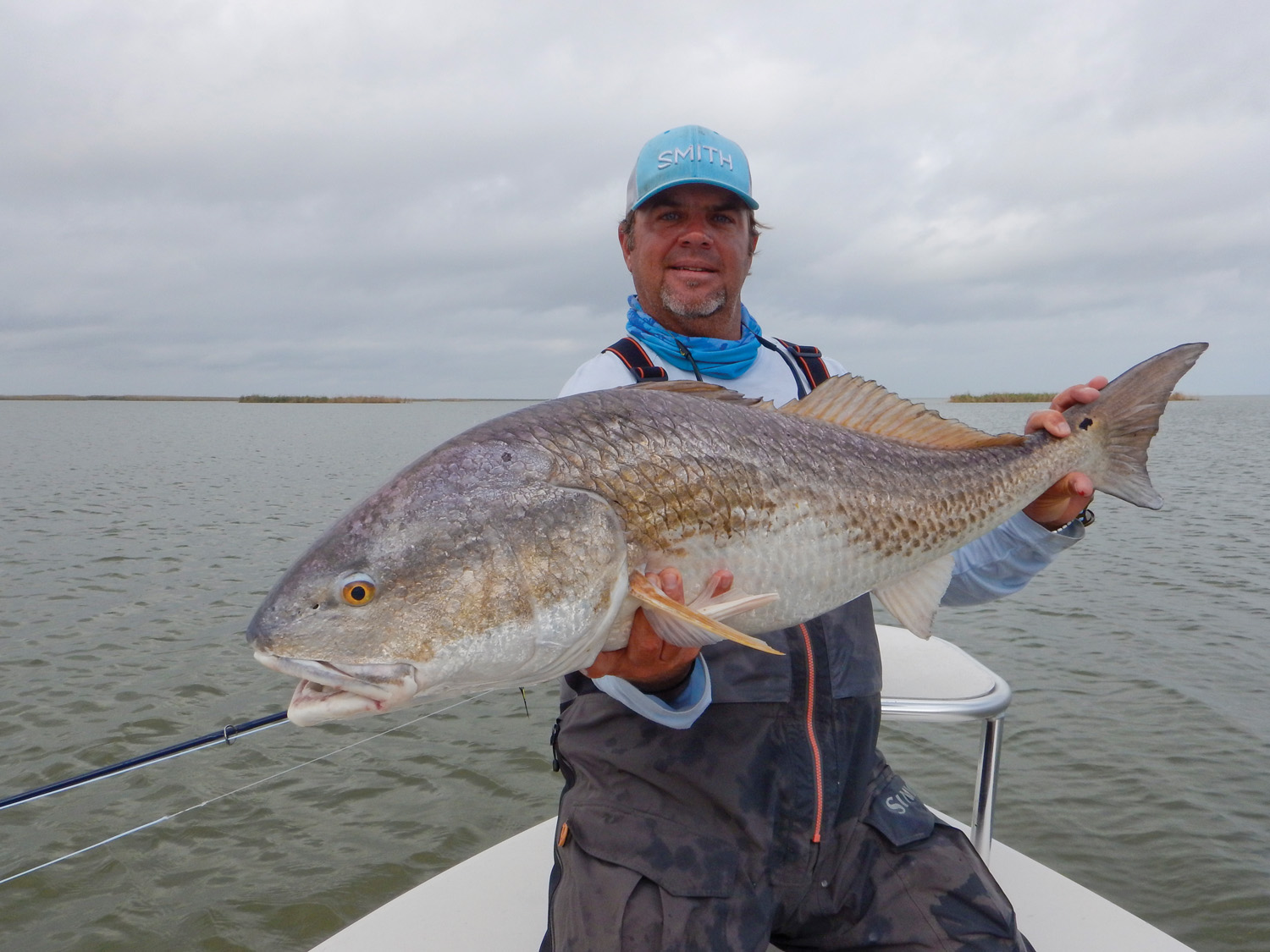 As storm clouds gather, guide Al Keller ends trip with a long thin bull caught by sight-casting in a marsh cove near Venice.

Al Keller's flats skiff slowed and stopped about 100 yards from our boat. We were in one of the shallow marsh coves amid the seemingly endless latticework of bays and canals of the Mississippi Delta near Venice.

The stick-figure guide grabbed the push pole and climbed onto the rear platform while Joe Turano and Phil Davis readied their fly rods. Keller dipped the long pole and leaned forward, then the water behind the skiff exploded. The upwind noise carried cleanly across the flat water.

"No way!" shouted Turano. "A big redfish just grabbed the foot of the push pole!"

Ed Cappel and I looked at each other. Our guide, Travis Huckeba, smiled. "It's happened before. The big reds in this murky water must think the lifting foot is a blue crab flushing from the bottom."

"Well, whatever they think, that's a hell of an impressive way to start a fishing trip," I said.

The opportunistic Turano flicked a short cast to the side of Keller's skiff and promptly hooked the 25-pound red. Fifteen minutes later he held the gleaming fish for a quick catch-and-release photo.

That bizarre beginning to our three-day trip last December underscored the remarkable shallow-water fishing for bull reds in the Louisiana marsh. Frankly, I'm amazed that more Texas anglers do not take advantage of this uncrowded opportunity. From major markets such as Houston and Dallas, the trip is no more hassle than, say, a long weekend to South Padre Island.

This is no knock against the excellent sight casting potential in South Texas – but the Delta marsh is the real deal for mondo-giant reds. As most Laguna Madre devotees would agree, the shallow reds along the Texas coast typically are immature fish in the two- to eight-pound class. Any double-digit fish earns bragging right.

In the Delta marsh during the prime cool-water bull red season of October through March, a 12 or 15 pounder is considered small; most run between 20 and 25, and fish topping 30 or 35 are not unusual. Certified brutes topping 40 are landed.

Using a 9-weight fly rod and a floating line and a large streamer to target these coppery "floaters" in three feet of water truly is an extraordinary angling experience. And, of course, pluggers do well on jig/cork combos and topwaters. The casting and spinning tackle especially is effective on cloudy days when blind-casting expands the potential.

This fishing is no fluke. It happens day after day. Well, this is assuming conditions cooperate. The venue can be fickle. For example, heavy Mississippi River runoffs can temporarily screw things up. So can a vicious cold front or a howling Gulf wind.

And, at best, the water clarity in the bays and coves is a bit froggy. But you don't need alcohol-clear visibility to spot a bold 35- to 45-inch fish cruising along a waist-deep shoreline. Or, for that matter, a school of them pushing water like a mini tidal wave.

The upside to the typically murky water is that the big reds aren't spooky. Also, they tend to be aggressive strikers and you can get away with a straight 30- or 40-pound mono or fluoro leader. Regardless of rigging, it's a king thrill to see the white mouth open and the gill plates flare as an XXXL red grabs the streamer and turns with a heaving swirl.

The downside is that chances amid the limited sub-surface visibility often are close. Fish just materialize. The fly casters stationed on the bow must be prepared for a fast lob or roll, maybe within 20 or 25 feet. For this reason, over-lining the rod one size, or rigging with one of the specialized redfish lines (with a short compact belly) is a wise quick-draw tactic.

Cappel, Davis, Turano and I flew 55 minutes on Southwest from Houston to New Orleans, then rented a vehicle and drove two hours to Venice. Other Delta venues include Hopedale, Houma, and so on, but Venice sits close to the mouth, well suited to intercept bull reds moving in from the Gulf.

We headquartered on a barge run by Bart Haddard of Southern Way Charters. The barge is moored in a protected canal, and the guide boats meet clients at the rail. The floating lodge offers comfortable double rooms, an aft deck for cigar/rum traffic, and excellent Cajun meals – a fine counterpoint to the fishing experience.

After the redfish attacked Keller's skiff, our two boats separated, each working a long saltgrass shoreline. Cappel and I agreed on 30-minute shifts on the casting platform and I insisted he take the first watch – no doubt because I am a nice guy, but mainly because the 8 a.m. sun angle was poor and I was confident he would be wasting his time.

With five minutes remaining on Cappel's clock, Huckeba spotted a fish. Cappel made a good cast and promptly hooked up. The red weighed 21 pounds on the guide's Boga Grip scale. I eyed the glowing slab and grudgingly congratulated Cappel.

"Kinda small," shrugged Huckeba, slipping the bull back into the water.

Wow, I thought, this is serious stuff!

About 15 minutes into my shift we spied six or eight big wakes cutting and slicing amid scattering mullet.I cranked off a double haul and dropped the yellow-and-green bead-eyed streamer out in front of a redfish rumble. Rarely have I felt so confident of great things over a fly rod.

The streamer settled and the water boiled and I tightened with a smart strip strike. World-class reds scattered left and right while my line fussed and fretted in a tight circle.

Maybe he's so big he doesn't know he hooked yet, I thought, giving the rod a stiff sideways pull.

A big sheepshead surfaced. It was a dandy, maybe five or six pounds, but not exactly what I had in mind. Several minutes later it flustered to hand, flashing flat sides, dark stripes and yellow buck teeth.

"Does this count?" I said, eyeing the glum fish.

"Of course it counts," Cappel said. "My turn. No, just kidding – keep fishing."

Fifteen minutes later I landed and released a 20-pound redfish. It was the largest I've caught by any sight-casting method in several years. To repeat, shots at solid double-digit fish in Texas bays are the exception.

Huckeba leaned on the push pole. "Well, now that you guys are warmed up, maybe we can find a few good ones."

And we did. Cappel and I each landed and released four redfish. My largest – best-ever on a fly – scaled 30 pounds. We caught two lesser fish, "only" 17 or 18 pounders, but figured our eight-fish average was close to 25 pounds.

Oddly, we each lost a big fish. I say "oddly" because bull reds with thick rubbery jaws tend to stay stuck once they turn against a sharp 2/0 or 3/0 streamer hook.

Mine was a stud that took 50 or 60 yards of backing and angled around a saltgrass clump in the middle of the cove. Huckeba poled after the line and I came tight again. The fish was wallowing close, maybe 20 feet away, when it came unpinned. I slumped over the slack. "North of 30?"

The other boat did about the same. Turano, a veteran of the Delta fishing, rated the day "a little better than average." His career best, caught on a previous trip, was a 35 pounder, so maybe he's a bit casual about the whole drill.

The next day, by prearrangement, we switched guides. Not that it made any difference. Keller and Huckeba both are on the A-List; they fish Louisiana during the bull red season, then migrate to Florida for tarpon. They know the marsh and have excellent "fish eyes."

Also, both are hard-working and even-tempered – in other words, nobody barked at me when I steppedon my shooting coils or my fly smacked a startled fish on the tail.

We were racing the unsympathetic weather forecasters. A hard norther was predicted to sweep through southern Louisiana that night, and we agreed to cut the three-day trip short and bail for the airport by mid-afternoon. Building cloud cover and gusting wind confirmed the wisdom of the retreat.

Cappel and I again caught four big reds apiece and he topped the session with a 29 pounder. I landed a long, thin fish that, with decent girth, surely would have topped 30. It scaled 28 but had a head like a pony keg.

Turano and Davis also had several fish in the upper 20-pound class. Davis earned extra style points by catching a big one on a popping bug.

As we drove away, I reflected on the lack of flats-type fishing traffic. The Mississippi Delta is vast and if other anglers were swarming after the shallow reds we never saw it.

I might have spotted four or five other poling skiffs during our two days of fishing. And this is not a hush-hush deal; I'm not "French frying" some secret spot. Probably half of the saltwater fishing shows on cable television have featured the bull reds in the Louisiana marsh. But, for whatever reasons, the fishing pressure seems to be light.

The world of angling is filled with great opportunities and you cannot do it all. But, if you plan ahead for next fall/winter, this is an easy one for any Texan keen to put a fly or plug over seriously big redfish. Hey, when they grab your push pole, you know you're in productive water.

Catch it right or only semi-right, and you'll think as I did: Why did it take me so freaking long to get onboard this program?