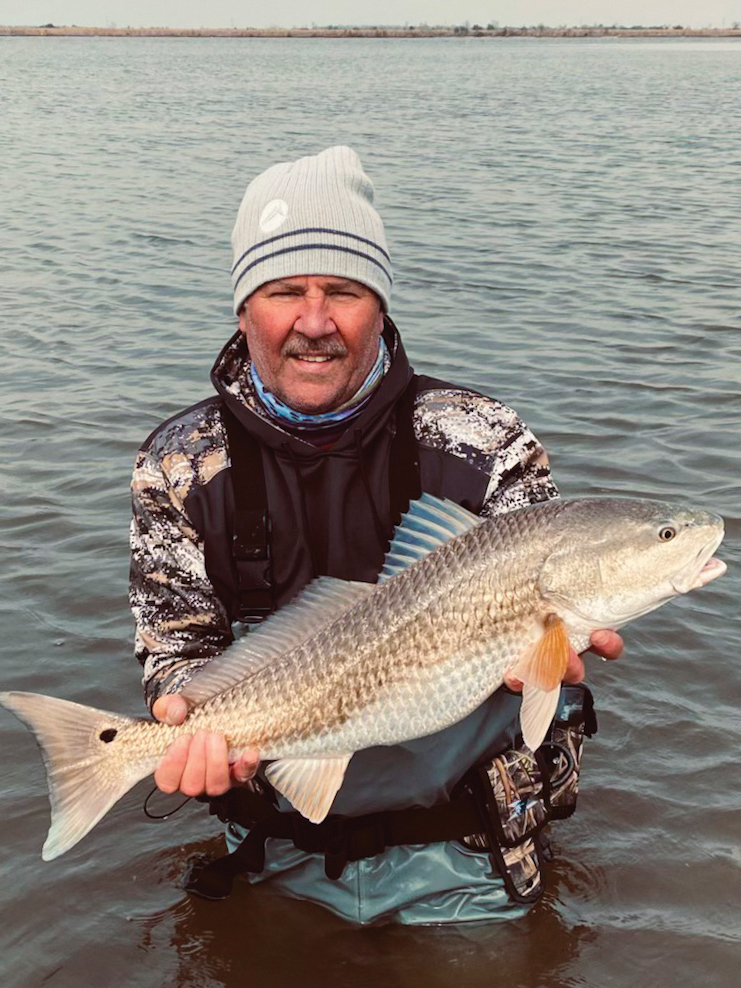 Another beautiful Sabine red given a second chance.

In hopes of discovering no further freeze damage, I waited until the last moment to post my column this month. With the exception of texts from a few anglers either checking out the Keith Lake chain or walking the revetment walls, there weren’t many resources to call on.

Our electricity was back on, but we were still boiling water when we made our initial loop through the north end of the lake and the bayous. I had already been receiving texts from south Texas friends and was very apprehensive as to what we may find in our own back yard.

I felt much better after checking out the back end of two dead end pipe line cuts where frozen reds have previously gone to die following major freezes. Aside from two undersized reds and several small pods of floating mullet and shad, we found only a dead pelican and two dead egrets. I had no idea that they couldn’t survive a freeze.

Three days later, we found a handful of small reds and several black drum between Three Bayous and Madam Johnson. It was a long way between fish and I don’t think it would have even merited any concern under normal times.

Since then, I have seen or heard nothing else alarming. While we appear to have escaped the worst of the worst, my host on those two runs, Johnny Hughes, was equally pleased, but a little conflicted. “My wife said we should be ashamed of worrying about a fish when half of Texas was without power or water and people were dying,” said Hughes.

“I agreed,” admitted Johnny, “but had to ask her. Do you think the rest of Texas quit fishing when folks in Houston and southeast Texas lost everything and were still living in FEMA trailers a year after Harvey roared through?” He’s still married!

Johnny has never guided, but was a conservationist when it was still viewed as a character flaw. It also came as no surprise that he left town the following day and is still in the San Antonio area helping folks repair broken pipes.

The best news concerning our fishing is that several local anglers were already catching specks and reds before our roofs completely thawed out. Our saving grace was the two or three cold nights in advance of the freeze that motivated the fish to seek out deeper confines.

While I could not be more pleased that the majority of our trout population has survived, it was a heart breaker viewing pictures of the losses on the Lower Coast. I saw more dead trout over 25-inches in a single picture than we have caught in the past two years!

As a result, I fully anticipate seeing Sabine and the Galveston area enduring far more fishing pressure over the next few months. Since trophy trout will not be the calling card it is even more important that anglers keep only fish that they will eat in short order. I am all in on the next fish fry, but stocking the freezer isn’t happening.

If the rest of the main lake is as productive as the north end is right now, I would plan a trip in the very near future. The bite and the patterns have pretty much been the same from Johnson’s south to the Intracoastal. Tie on a Fat Boy or Softdine XL and homestead three to five feet of water.

I have seen very few schools of small mullet since the freeze, but when you do, you are usually in the right place. We have had days when a five-inch rattail Assassin changed our luck, but it can be a mistake to give up on mullet imitations. I haven’t fished much Catch 5 or Catch 2000 of late, but I have no doubt they will work as well.

The difference in a good and a great day has been waiting out the bite in any area that has previously shown promise. I don’t know how many times we have been ready to move only to get a strike and limit without cranking the engine again.

Redfish are also consistently crashing the party in the same depths and the majority of them have been of the larger variety. The aforementioned lures will work as well as a tail rigged under a cork.

This was a devastating event, but it has also provided a wonderful opportunity to show the kids that fishing and conservation go hand-in hand!