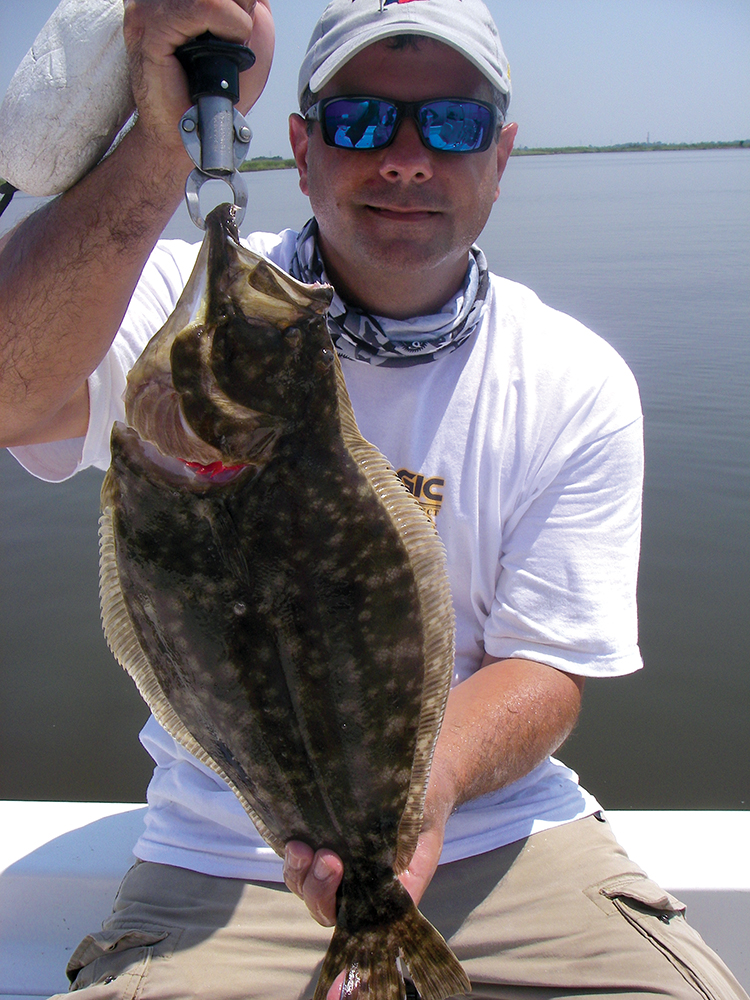 Flounder bite is not a bad Plan B!

While scattered showers every doggone day make the heat a little more manageable, we could do without additional fresh water right now. They were finally able to shut the gates on Toledo Bend and that has given the Sabine River a chance to drop a little. The Neches, however, is still at flood stage, but they waited as long as possible before pulling the plug on Rayburn. Even with all of that water we are still not in bad shape for the shape we are in!

One hurricane or tropical storm that moving too slowly will short circuit what has been a slow, but consistent summer bite thus far. The fish catching patterns have changed on the main lake, but according to the folks I talk with, the trout on the jetties and lower ship channel are acting like trout should act.

Tides and wind direction merit more consideration when fishing south, but the Louisiana side of the jetties has been good for both trout and redfish all the way back to the beach front. The pocket can truly be an adventure as you never know if it is going to be wall to wall sharks or schools of redfish running the shallow surf.

While the redfish are filling the gap for a lot of trout fishermen, that bite has been anything but normal for the past couple of weeks. Our shad hatch took place late and that alone has slowed the open lake madness that usually occurs this time of the year.

Finding big schools of redfish blowing holes in the surface and shrimp or shad in the air is downright exhilarating, but we are not seeing much of that at this point. Those redfish are still there, but much more difficult to locate when the birds aren’t ratting them out.

We have had a few occasions when we caught multiple fish out of a single school without ever seeing any signs on the surface. The best part of that pattern is that they seem to hold better when cruising the bottom and not herding shad where we can spot the activity.

It could change tomorrow, but we are doing most of our catching from Willow south to Garrison’s. By the time you read this, however, they could be all over Coffee Ground as well, or we could be evacuating.

Do not overlook the Intracoastal. Several redfish tournaments have been won by anglers fishing only the ICW. The marsh bite has been woefully slow of late, but the bite in the deeper water of the ICW has been very consistent.

For my money, the best shot at a productive day on the lake is working the flooded grass on the Louisiana shoreline. Because we are currently catching more flounder than I have caught in a long time, I am now targeting them and have downsized to the three-inch Usual Suspect and Gulp curly tail grubs rigged on a one-eighth ounce heads.

The majority of the keeper fish are only in the sixteen to nineteen inch range, but we are releasing a lot of smaller fish as well. The bonus is that occasional four pound flounder or a solid slot red that unexpectedly crashes the party.

This is a program that will last all day long regardless of tide movement. The bite will slow down a little at times, but as of yet has not completely stopped. I am most comfortable fishing this pattern with a Laguna 6 ½ foot medium-light rod and reel filled with 20-pound braid and 12-pound mono leader. A loop knot will get you more strikes.

Any time the trout bite is tough, fishing pressure is non-existent on Sabine Lake and that has been the case most of the summer. I feel certain that it is more crowded south of the Causeway, but I am yet to work a flock of birds with another boat in the lake.

It is not like you can’t catch a Texas legal trout in the lake right now. They are all but impossible to pattern, but you can still limit very quickly if you find yourself at the right place at the right time.

While fishing the shorelines we are constantly scanning the open lake for birds that have already found the trout. Most of these fish are on the small side, but they are fun to catch.

Remember…kids don’t care what is pulling on the other end of their line just as long as it is happening on a frequent basis!