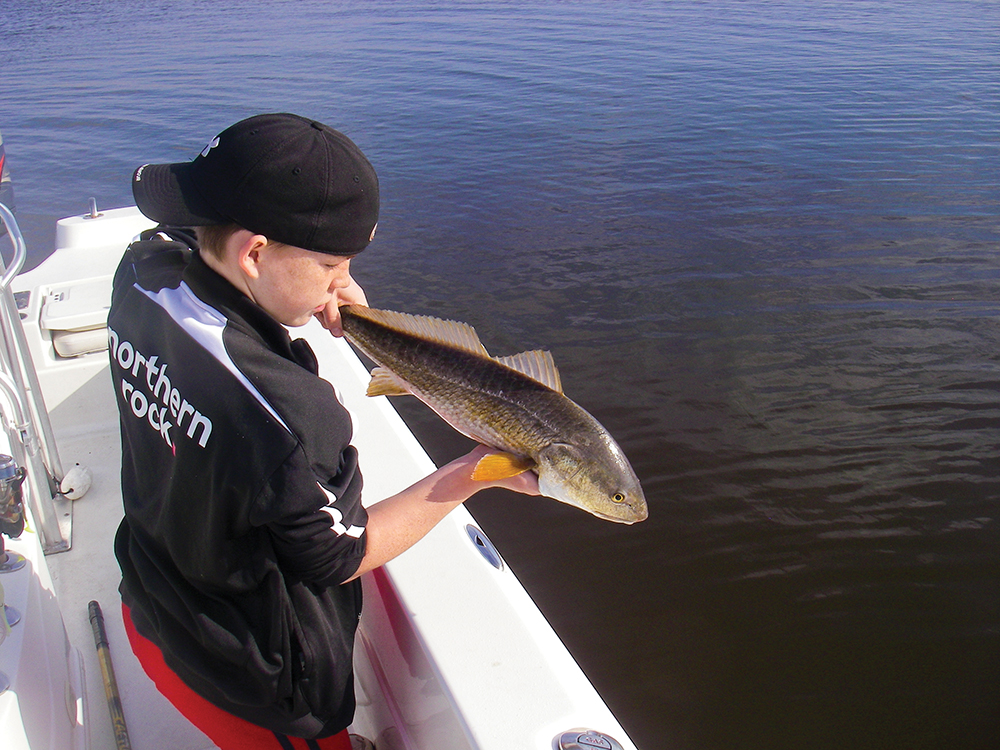 Preparing to release; maybe they will share another tug of war in the future!

We have gotten a little bit of everything from hail to what we consider to be a mini-drought over the past month, but none of it has negatively affected the improving bite on Sabine Lake.

Area anglers continue to re-learn the lake and more productive patterns due to the rash of hurricanes and while I wish that weren’t necessary, it has been challenging. That would not be the word I used to describe it if not for the fact that our trout population continues to grow in both size and numbers.

It is still unrealistic to hit the lake expecting to catch five to seven pound trout all day (even one for that matter), but most of the limits going home with anglers consist of trout in the 16- to 19-inch class. Only a year ago a sixteen inch trout was not a given and five fish that size were not an everyday occurrence.

With Mother Nature being more forgiving, the only bump in the road concerning an even more robust recovery has been questionable conservation practices by a handful of the anglers. Texas fishermen that equate success with meat versus dollars spent continue to make the short run across the Causeway to take advantage of more liberal limits.

That has been going on for years, however, and is not nearly as concerning as occasionally observing fishermen culling limits from fish that have already spent time in the ice box. That practice is far more prevalent amongst folks fishing the more restrictive five fish Texas limit.

The trout bite has been good enough that fewer and fewer anglers are running all over the lake looking for one more fish. Depending on the wind, I have fished both ends of the lake recently and I can see why they are staying put. The only difference that I have observed is that there seems to be a little more bird activity on the south end.

I haven’t bothered to fish that mixture of gulls and terns, but other guides I’ve talked with say most of the fish under the birds are either smaller trout or redfish. You can quickly determine what you have found by tying on a Hoginar and lobbing it into the melee. It sinks a little too fast to be a trout favorite, but any redfish with functioning eyes will immediately assault it.

You can still catch trout on a Fat Boy, but it is quickly giving way to a swimbait or plastic tail rigged on an eighth-ounce jighead. Our water clarity seems to change on a daily basis, but glow-chartreuse has really made a comeback. There have been days when color made little difference, but lure length is critical.

When throwing a four-inch tail we have relied on a Sea Shad or Lil John and had no reason to experiment with anything other than an Assassin or Down South tail when the fish want the larger offering. Regardless of which end of the lake I am currently fishing; my best bite is taking place in three to four feet of water.

Rather than keying on any kind of structure we are looking for balls of shad on the surface while drifting. The aforementioned tails are equally deadly for this type fishing when rigged on a two foot leader under a cork. When we aren’t having to deal with gafftops we also add a dab of menhaden scent to our lures.

The flounder bite has also gotten a lot of attention lately, but that is in part due to the fact that the Game Reserve is now open. Yes, you need a Louisiana license to fish there. The major bayous on the east side of the lake like Willow offer all but a guaranteed shot at a few solid flatfish every day.

I prefer to fish them on an outgoing tide and my approach is simple. A lead head just heavy enough to compensate for the tide threaded inside a two or three-inch curly tail is the ticket. You can enhance your chances by adding a small piece of shrimp or replacing your tail with a Gulp curly tail. Do not be surprised when a solid slot red crashes the party.

It’s that time of the year to include big hats, lots of sunscreen and the kids on every trip. The love of fishing lasts a lifetime and few things are more rewarding than sharing that gift with the kids!