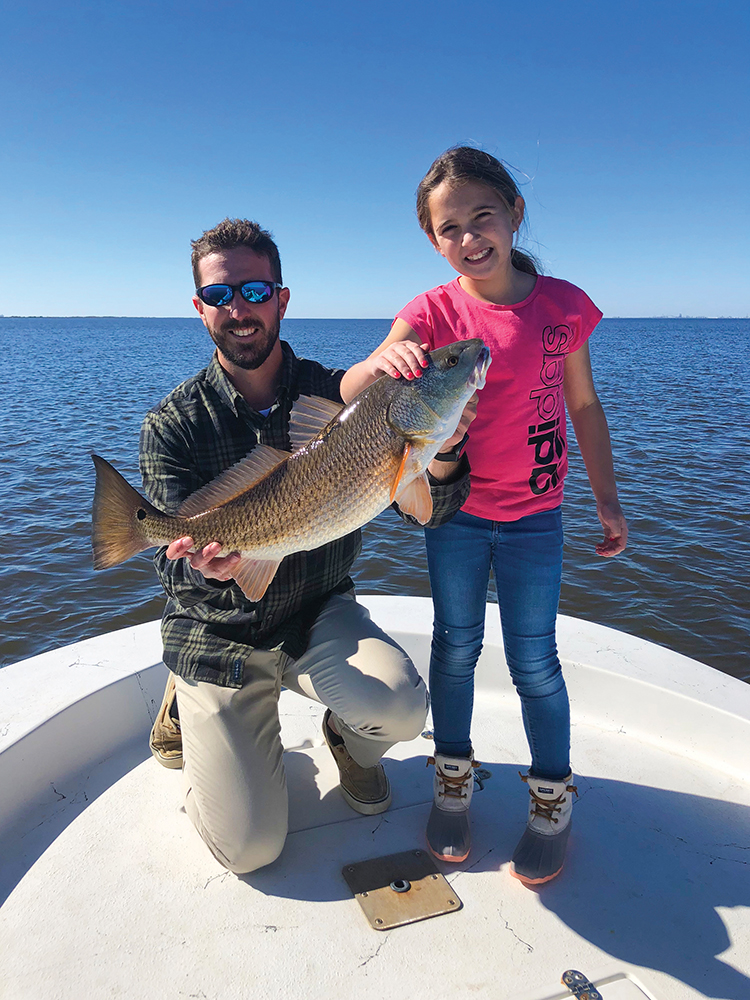 Olivia Frederick and dad, Rusty, made a memory during a brief warm-up!

Over the past couple of months, Mother Nature has certainly done her part in helping the trout population rebound here on Sabine Lake. She even served up a winter of sorts and it has helped!

We saw very few days below freezing, but enjoyed a number of days in the 40s punctuated by brief warm-ups that would have you fishing in shorts by the end of the day. The first few hours of most trips are still on the chilly side, but no one is complaining.

Before reporting on what has been a very respectable trout bite, I would be remiss in not reminding you that a quality rain suit is every bit as important as the best rod and reel in your arsenal. We obviously fish a lot of days in the rain, but it is also a welcomed friend on that first boat ride of the day throughout the early spring and fall.

A quality rain suit may cost a little more than you probably hoped to spend, but not unlike that rod and reel, it will serve you well for years. I wear the same suit year ‘round whether it be fishing or sitting in the rain at a high school football game.

Most of the better suits are heavy enough to ward off frigid breezes yet light enough to wear year ‘round. Because I rely on mine so much of the time while on the water, I prefer bibs rather than pants. They are drier when having to bend over to pick something up!

Aside from a real winter and very little rain, the absence of fishing pressure has also helped our trout rebound. I haven’t fished as frequently while continuing to recover, but it has been unusual to see more than a couple of boats on any given day.

Two factors have contributed to having the entire pond to myself. The first being that persistent wade fishermen looking for the trout of their dreams have always provided most of our winter pressure. Those kind of trout are still in hiding and few local anglers are dedicated enough to fish in miserable conditions for three pound specks. Add to that the fact that the big trout bite has really improved on Calcasieu and an added thirty minute drive doesn’t merit a second thought.

The second reason is that much of the lake has been, and still is, really off-colored. Extremely low tides and even modest winds now keep the loose bottom stirred up much of the time. The good news, and something that it took us a while to figure out, is that the salinity is still good and the fish have apparently adapted to hunting down their next meal in water that does little to promote angler confidence.

In spite of the fact that I am currently relegated to far more drifting than wading, my arsenal has not changed. The only change is that we are forced to fish those same lures much slower. Even choice of color has not made as much difference as speed of retrieve.

The Fat Boy and Softdine XL have been our go-to lures and the Catch 5 has shined at times as well. Confidence has made more difference than color, but I would say our two most productive colors have been pink and morning glory.

Easily, the most perplexing thing about this bite is that while we have caught at least a few fish all over the lake, they seem to hold in tight bunches on short stretches of shoreline. It may require a lot of casting to locate them, but you can bury the Talon when you do!

Three- to five-feet has been the most productive depth and strangely enough, a non-descript stretch of shoreline can be as good as a point or drain. It goes against the grain, but the trout have been solid 2- to 3-pound fish and I have found nothing any better.

When just drifting with no clue, there is no better choice than a chartreuse GULP Jerk Shad rigged on a 24-inch leader under a popping cork. While ferreting out tight groups of trout it will also attract the nearest redfish. It is not unusual to find the reds hunting in small schools as well.

The best aspect of fishing the cork is that the kids are very much in the hunt while you are prospecting, with no need to change lures once you find the fish!