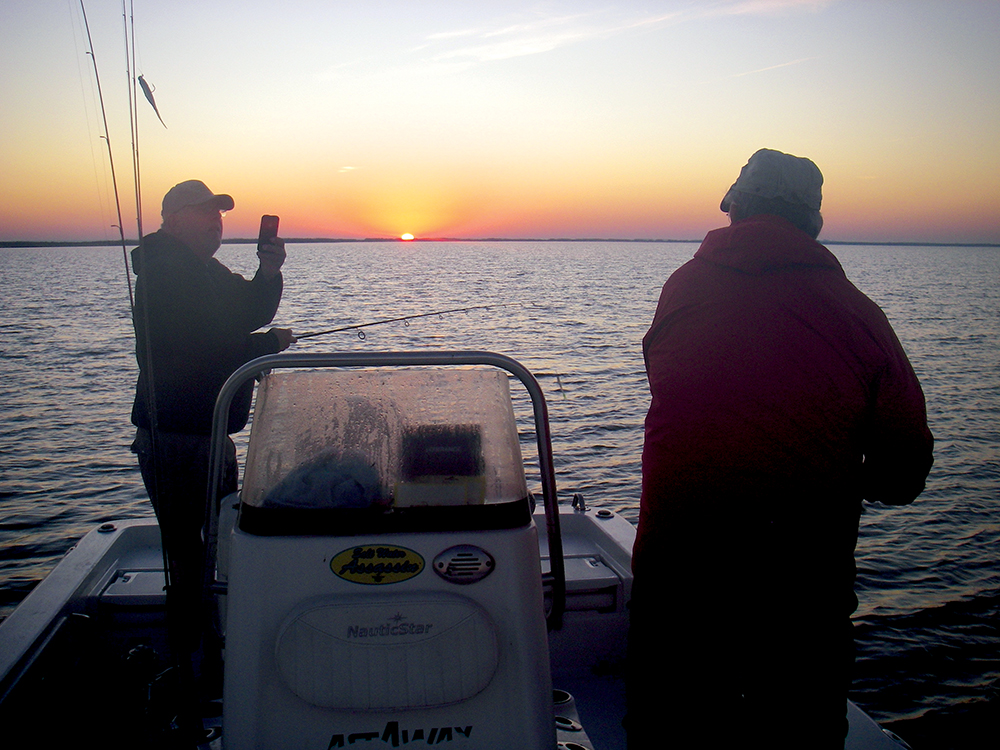 Know of a better way to start the day?

After two consecutive days of grinding in a steady downpour, it was obvious that the trout bite in Sabine Lake had not improved as much as we had anticipated and the daily rains were not to blame.

Having miraculously dodged a direct hit from Ida and Nicholas, local anglers really felt like the storm surge from both storms would not only usher in more bait and higher salinity levels, but the larger trout as well. The two to three pound trout that have been holding on the beaches and the jetties are, however, apparently still holding there!

Local rainfall, with the exception of the Harvey disaster, is the norm this time of the year and as a rule, hurricanes hurt the fishermen more than the fishery. With both Rayburn and Toledo Bend lake levels currently very low, we at least got the full benefit of the incoming salt water.

We can’t even blame the absence of quality fish on the freeze that wreaked havoc on the lower coast. Our big fish were already gone and the smaller trout had time to slide off into nearby deeper haunts.

While we have yet to see the return of larger trout, there is no doubt that fish in the ten to fourteen inch class are just loving the more favorable water conditions. On a recent trip, we never fished the first flock of gulls and still caught thirty to forty trout, both drifting and wading.

One member of our foursome was intent on keeping five fish for a rare fish fry, but it never happened. The entire group caught only three Texas legal trout!

The exception to the difficulty of locating better fish in the lake has been the bite on the beaches and ship channel from Light House to the jetties. I don’t spend much time that far south, but I have a lot of friends that do and they are doing much better on two to three pound trout with an occasional four to five pound fish to boot. Best lures are really dealer’s choice, but the game is all about homesteading a promising spot on a tide change.

I have waded the beaches a few times following light north winds and that bite is addicting. Not only were the fish larger, but we never fished in water deeper than knee-deep. I was told that the clearer water and flatter surf increases your odds, but we caught fish in some pretty dirty water on the last trip.

Back to Sabine Lake. The silver lining to catching mostly undersized trout is that we are now catching them all over the lake. Fishing the birds is all but a guarantee that you will catch only small fish or a slot red crashing the party.

For that reason, even without cooler weather, we are already plying traditionally good fall areas with She Dogs, Fat Boys and Soft-Dines. It is also not unusual for a red shad Die Dapper or 5-inch rattail Assassin rigged on a one-eighth ounce head to out catch anything else.

The lake side of what remains of Sidney Island and the shoreline between Game Warden Cove and Willow Bayou continue to hold a lot of fish. That stretch of east shoreline has also yielded most of our keeper redfish.

Redfish have provided most of the fish fries for anglers buying into giving the trout a second and even third chance, but that bite has now slowed down a little as well. It is not so much due to fewer fish, but the fact that you have to work a little harder.

The surface schooling action has grown more infrequent, but we are now finding more fish running the rocks and flooded grass. That equates to more casts and time spent on the troll motor, but watching a red kick up mud and unexpectedly demolish your topwater lure is no less exciting.

I am also looking forward to enjoying a better than average flounder run as the water cools off and the migration kicks into gear. If it’s a shot at a flattie over five pounds you are looking for, I would fish live bait or a Gulp product in the ship channel or in the mouth of a bayou. For better numbers of smaller keeper size fish I would target marsh drains and Roseau lined points.

Don’t forget…when fishing with the kids it is as much about the bite as it is the size of the fish!