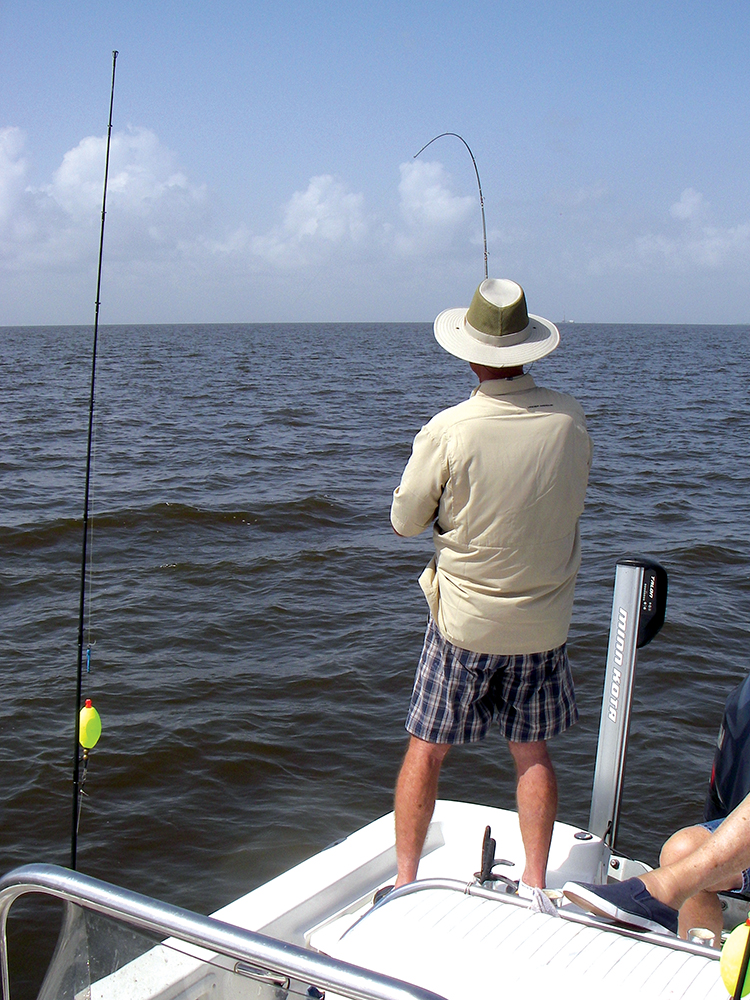 Schooling reds will keep you busy!

“Just a little disturbance in the Gulf,” said Rusty Frederick, “and I think our trout fishing will explode from Galveston to Sabine Lake. Strong incoming tides will move a lot of these trout stacked up on the beaches into the bays.”

Not unlike our editor’s prophetic statement in a recent issue reminding us all to “Be careful what we wish for,” Rusty was also equally quick to add, “We are probably better off just waiting the process out than expecting Mother Nature to do anything in moderation!”

He was right on both accounts as a swollen Gulf, compliments of Ida, did usher more bait and trout into Sabine Lake, but absolutely ravaged Louisiana and Mississippi in the process. The catching immediately improved, but it will be a while before we can take advantage as fishing in this corner of the state currently takes a back seat to helping our next door neighbors recover!

With both Rayburn and Toledo Bend turning loose very little water we were already making great strides toward a better trout bite. The trout did not drastically improve size-wise overnight, but better numbers have now moved in from the jetties and ship channel.

While the majority of the trout in the lake are in the 12 to 14-inch range, the trout running the beaches are averaging a healthier 16 to 20-inches. I am not much on fishing the surf, but the reports were just too good to ignore. The week prior to the hurricane we threw Spooks and She Dogs in a flat surf three days in a row and easily limited every morning.

I have no idea how many fish we released each morning, but the number was substantial and we left the fish biting every day. The first trip was on Crystal beach and the other two were on Mae’s beach, just west of Johnson Bayou. That’s a lot of beach front!

The bonus for me was watching youngsters standing in knee-deep water catching trout along with their dads. If you are not a boat owner, this is a quality alternative. If the fish don’t bite, put the rods in the truck, grab a soda, and explore the beach with the kids!

More liberal limits are keeping the two launches on the Louisiana side jam-packed most days as too many anglers try to justify rising gas prices with a few more fillets at the end of the day. I have never believed that fishermen relying on plastic lures to fool fish could ever decimate the population, but the value of giving those small trout at least one opportunity to spawn is immeasurable.

Sabine Lake anglers are not complaining about a very good redfish bite that has only improved across the summer. I cannot imagine even the most dedicated trout fisherman not getting excited about red torpedoes blowing holes in the surface. That noise alone is as exciting as the anticipated hook-up.

If you want to maximize your enjoyment, lob a topwater into the melee and back off of your drag. Clipping the barb opposite the remaining two on your plug’s treble hooks will not adversely affect your hook-up ratio and makes releasing the fish both easier and safer.

When the school goes down for a brief period of time, you can still catch fish by crawling a tail or Hoginar across the bottom. A huge number of local anglers throw nothing but a Trap when chasing these fish and they are usually cleaning fish at the end of the day.

Fishing the shorelines will undoubtedly get better this month as well, especially with all of the flooded grass. There are a lot of redfish already there, but the bite just isn’t as addicting as driving up on fish that have thrown all caution to the wind.

Redfish running the grass still eat anything you can pull through the scattered vegetation, but a three-inch swimbait or Gulp rigged on a quarter-ounce head will more quickly fool flounder and trout in the area as well. If you prefer to fish a four-inch paddletail like the Sea Shad, a drop or two of menhaden or shrimp scent will render it even more effective.

Congratulations to the S.A.L.T. Club located on Pleasure Island. The family oriented club gave away lifetime fishing licenses to four lucky youngsters that weighed in anything from a crab to a croaker in their last two tournaments. The future of fishing is all about the kids!