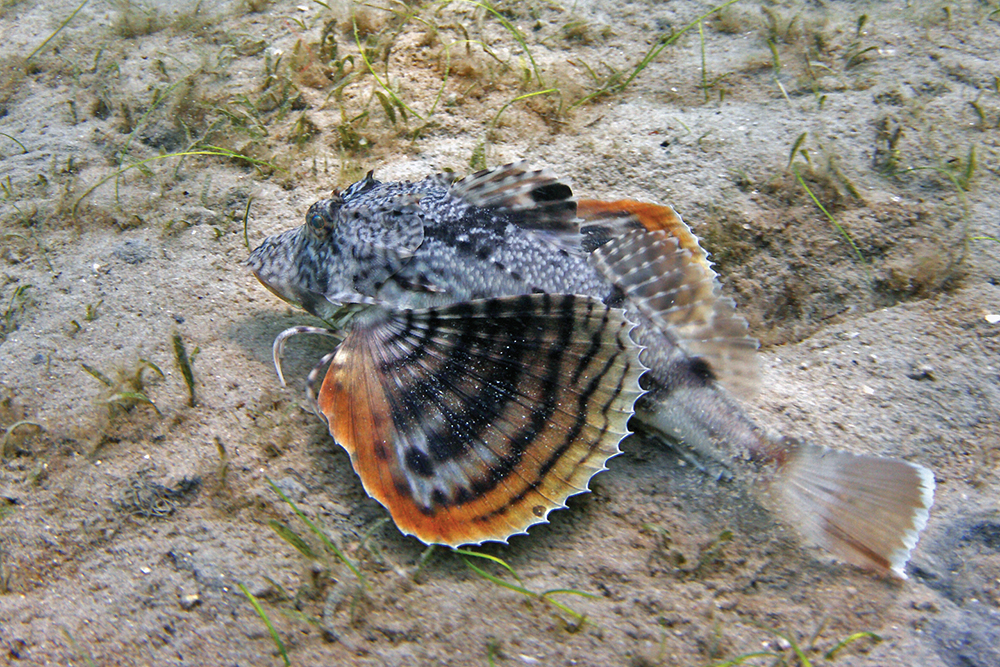 Sea robins are a family of mostly benthic scorpaeniform fish. They share an order with scorpionfish and lionfish, which are renowned for their venomous fin spikes. While the sea robin doesn’t have venom like its cousins, it does have very pointy spines, used for self defense, sticking out of two dorsal fins on its body. The Scorpaeniformes Order is one of the five largest orders of bony fishes, with over 1,320 species. Scorpaeniform fishes mostly live on the sea bottom in relatively shallow waters and typically have spiny heads and rounded pectoral and caudal fins. Sea robins have elongated bodies with armored bony heads; a long, tapering tail section; and, as mentioned earlier, two dorsal fins. They are named for their large, fan-shaped pectoral fins, which are brightly colored in some species. These fins are further modified by three detached fin rays on the forward edge, which sea robins use to “walk” along the sea floor. During larval development, these rays separate from the rest of the pectoral fin, developing into “walking rays” that can flex and move independently like small fingers, complete with specialized muscles that allow them to serve as structural supports during underwater locomotion. They also aid in sensing mollusks, crustaceans, and other bottom-dwelling prey. Most sea robin species are about a foot to a foot-and-a-half long, the largest reaching just over two feet. Some species are covered with bony plates, while others just have everyday scales. Their topsides range from medium gray to reddish-brown; their undersides are quite pale by comparison. They have unusually thick skulls, which they use for digging in and around rocks, and many have bright blue eyes.

There are more than ten sea robin species found along the Texas Gulf Coast, but the most common is the bighead sea robin, Prionotus tribulus. Like its name suggests, the bighead has a broad head, which tapers into a square snout. It is one of the armored varieties, and is more robust than most other sea robins, reaching lengths up to 14 inches. Dark pectoral fins with bright banding (and no spots), along with a slanted bar under the second dorsal fin distinguish the bighead from other sea robins. They are very common in bays throughout the Gulf of Mexico, often foraging over sandy or smooth-pebbled substrate up to 600 feet deep. Sea robins, in general, spend most of their time on the sea floor; they are rarely seen near the surface.

Another distinctive feature of the sea robin family is their vocalizations. They can produce a grunting sound by beating particular muscles against the swim bladder. Sounds similar to a frog’s croak, and has given them the nickname, gurnard (from the French, “to grunt”). Not to be confused with flying gurnards, a similar fish to sea robins, but lacking the walking rays on the pectoral fins, and although also a benthic fish, more commonly found near the surface than sea robins.

Sea robins tend to be more active at night in inshore waters, bays, and estuaries. They’re good swimmers, but they often “walk” along the bottom to hunt. Their sensitive walking rays let them move and manipulate small objects, as well as detect prey via chemoreception. They also use their head as a shovel to uncover small creatures. Sea robins will eat just about anything they find: crustaceans, shrimp, squid, mollusks, bivalves, amphipods, eggs, other fish, practically any bait, and even seaweed. Juveniles eat mostly the same food as the adults, but also copepods in large quantities. Not many creatures eat sea robins due to their pointy spines, but some shark species don’t seem to mind.

During mating season, sea robins produce a staccato call that is different than their usual grunting noise. Spawning occurs from late spring through early fall, peaking in July and August. Very few eggs are ripe at any one time, which is why the breeding season is so lengthy. Females lay their eggs over sandy areas. Fertilization is external. Eggs are buoyant, yellow, and less than one millimeter in diameter. They hatch in about 60 hours. The parents don’t stick around. Newly hatched larvae are between 2 mm and 3 mm long, and by the time they reach 6 inches, their walking rays have developed. Sea robins reach sexual maturity around 2 or 3 years old, and can live up to 11 years, though they generally only reach about 8.

Many anglers consider sea robins a nuisance because they steal bait and are unpleasant to handle. However, they have firm white flesh that holds together well in cooking, making them well-suited to soups and stews. They can be broiled or baked, even harvested for caviar. They’re also used as bait for lobster traps and flatfish, handlines, pet food, and fertilizer. Sea robins depend on the estuary systems as a nursery for their larvae. As ever, increasing development and pollution results in the continual loss of valuable habitat. In addition, because their eggs float, they’re extremely susceptible to boat traffic. Luckily, all our local species are currently listed as Least Concern on the IUCN Red List. They probably have their unappetizing spiny features to thank.

Where I learned about sea robins, and you can too!

The Fishes of North Carolina
ncfishes.com/marine-fishes-of-north-carolina/prionotus-tribulus/

Courtesy of the NOAA Office of Ocean Exploration and Research, 2017 American Samoa