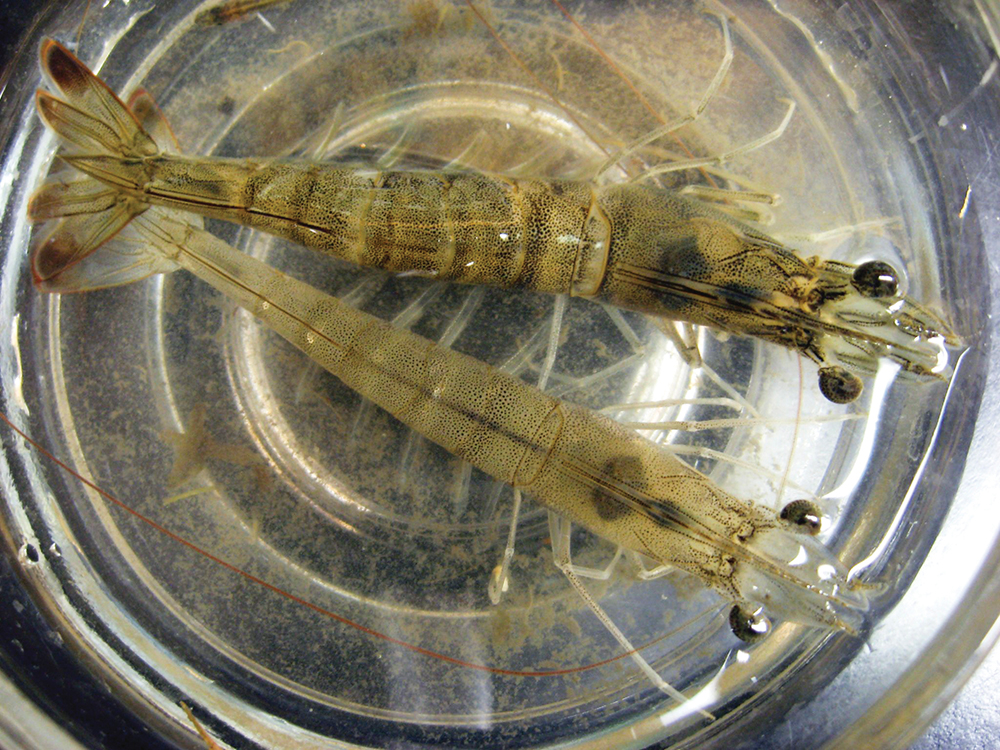 Brown, white, and pink shrimp are the three main recreationally and commercially important shrimp species in the Gulf. They are most valuable ecologically (and economically) as dietary support for the growth and survival of larger species – though they do have another important task: recycling basic nutrients by feeding on organic matter in the sediment. It's a thankless job, one the white shrimp, in particular, usually get stuck with.

These three species look very similar, but can be differentiated by a few key features. White shrimp are lighter in color than brown or pink shrimp, and their tail flippers (uropods) are black near the base with bright yellow and green along the edges. Brown shrimp tails are red, dark green, and occasionally light blue in color, and pink shrimp have light purplish-blue tails, and usually a dark red spot on the side of the abdomen. Brown and pink shrimp have grooves along the top of the head and lower abdomen. The grooves on pink shrimp are slightly narrower than those of brown shrimp. White shrimp don’t have grooves and typically have much longer antennae, 2.5 to 3 times longer than their body length.

Brown shrimp, white shrimp and pink shrimp are estuarine-dependent species and have similar life cycles, but vary seasonally in abundance. In general, adults spawn in the Gulf, where fertile eggs hatch into free-swimming larvae. These larvae develop through several stages into post-larvae. Once post-larval shrimp enter the estuaries, growth is rapid and is dependent on salinity and temperature. When they reach about 3 inches in length, shrimp emigrate to the Gulf as sub-adults where they mature to adults and start the cycle again. Shrimp typically live for one year and are considered an annual crop.

During mating, the male transfers a sperm packet (spermatophore) to the female. Brown and pink shrimp mate immediately after molting, when the female's exoskeleton is soft. The spermatophore is then covered by two "plates" that hold it in place, and females may spawn days later. White shrimp mate between molts when the exoskeleton is hard. The spermatophore is glued to the underside of the female, and spawning occurs almost immediately. Eggs of both species are fertilized as they are ejected past the spermatophore, and sink to the ocean floor. Within 24 hours, the eggs hatch into tiny larvae that rise into the water column.

The initial larval stage (nauplius), during which the shrimp looks like a tiny mite, is followed by protozoeal, mysis, and postlarval stages, a process of about two weeks. Postlarvae look like miniature adult shrimp. Brown shrimp postlarvae remain in the ocean bottom sediments during the winter; as the ocean warms in late February and March, they become active and ride tidal currents into the estuaries. White and pink postlarvae move into the estuaries about two weeks after spawning, usually from April to June, moving further in with each high tide. After brown, white, and pink postlarvae enter shallow estuarine areas along the Texas coast, they assume a benthic existence and develop into juveniles (about 1 inch long), usually concentrating in estuarine waters less than 3 feet deep, where there is anchored vegetation and/or abundant detritus. Brown shrimp, in particular, tend to be found in significantly higher densities in vegetated marsh areas.

Growth is rapid, up to 1 mm per day / 1-2 inches per month, molting their exoskeleton to grow. Small shrimp molt several times per week, but molting slows as they become larger. As omnivores, they feed on algae, organic debris, polychaete worms, amphipods, copepods, small mollusks, diatoms, bacterial films, slime molds, and yeast. Water temperature/quality/salinity, available food, and habitat affect growth. If the water gets too salty or cold, growth will slow down or stop – though they can tolerate quite a wide range of salinities.

Shrimp stay in this nursery habitat for a few months, until they reach 2-4 inches long. Brown and pink shrimp migrate to the Gulf from May to August, coinciding with ebb tides and full moons. Some pink shrimp over-winter in Texas bays, residing in estuaries for up to nine months. White shrimp exit the estuaries when water temperatures begin to decrease. Those that survive predation, trawlers, and disease become the next year's spawning stock. Survival rates are very low for larval and juvenile shrimp; less than two percent of the eggs spawned survive to adulthood.

When in inshore waters, brown and white shrimp prefer areas with muddy or peaty bottoms, though brown shrimp prefer the saltier, seagrass-filled water of estuaries while white shrimp gravitate to the fresher upper bay areas, without seagrass. Offshore, they're most commonly found over soft bottoms of mud, sand, and shell. Pink shrimp, on the other hand, prefer bottoms of hard sand and calcareous shell. All three species are prey for almost any larger carnivorous or omnivorous predators. Cannibalism is also common among adult white shrimp.

The Gulf of Mexico shrimp fishery is managed under the Gulf of Mexico Fishery Management Plan, often in conjunction with the State of Texas. The goals of this program are similar to TPWD's: enhance the yield, both in volume and value. The annual Texas closure of the Gulf shrimp season serves to protect small brown shrimp from fishing until they mature, providing a more valuable harvest size overall and lessening the waste of shrimp that would have been discarded due to small size. Brown, white, and pink shrimp account for a majority of the Texas commercial catch – particularly brown shrimp. The "other" commercial catch consists of seabobs, rough back shrimp, royal red shrimp, and rock shrimp. And there are some noncommercial shrimps caught in the sidelines, grass shrimp being the most common of these.

Roads, sewer facilities, power plants, and other conveniences of modern life unavoidably impact the surrounding environment and affect the populations of native species. Habitat, growth, feeding, and reproduction of a species lead to how a fishery is managed. By altering fishing regulations to offset natural and human-induced imbalances, the abundance of fast-growing/short-lived species, such as our shrimp, can be managed relatively quickly. TPWD took over management of the shrimp fishery in Texas bays in 1985. Since then, TPWD has had some success in shrimp management by adopting and refining fishery regulations and introducing the shrimp vessel license limited entry and buyback programs. The goals of all these changes are to reduce overfishing, to increase the industry's economic value, to reduce bycatch, and ultimately to promote the sustainability of shrimp stocks.

That's good news for your next shrimp ceviche.

Where I learned about shrimp, and you can too!

*Reminder to only use Gulf shrimp as bait shrimp in Texas