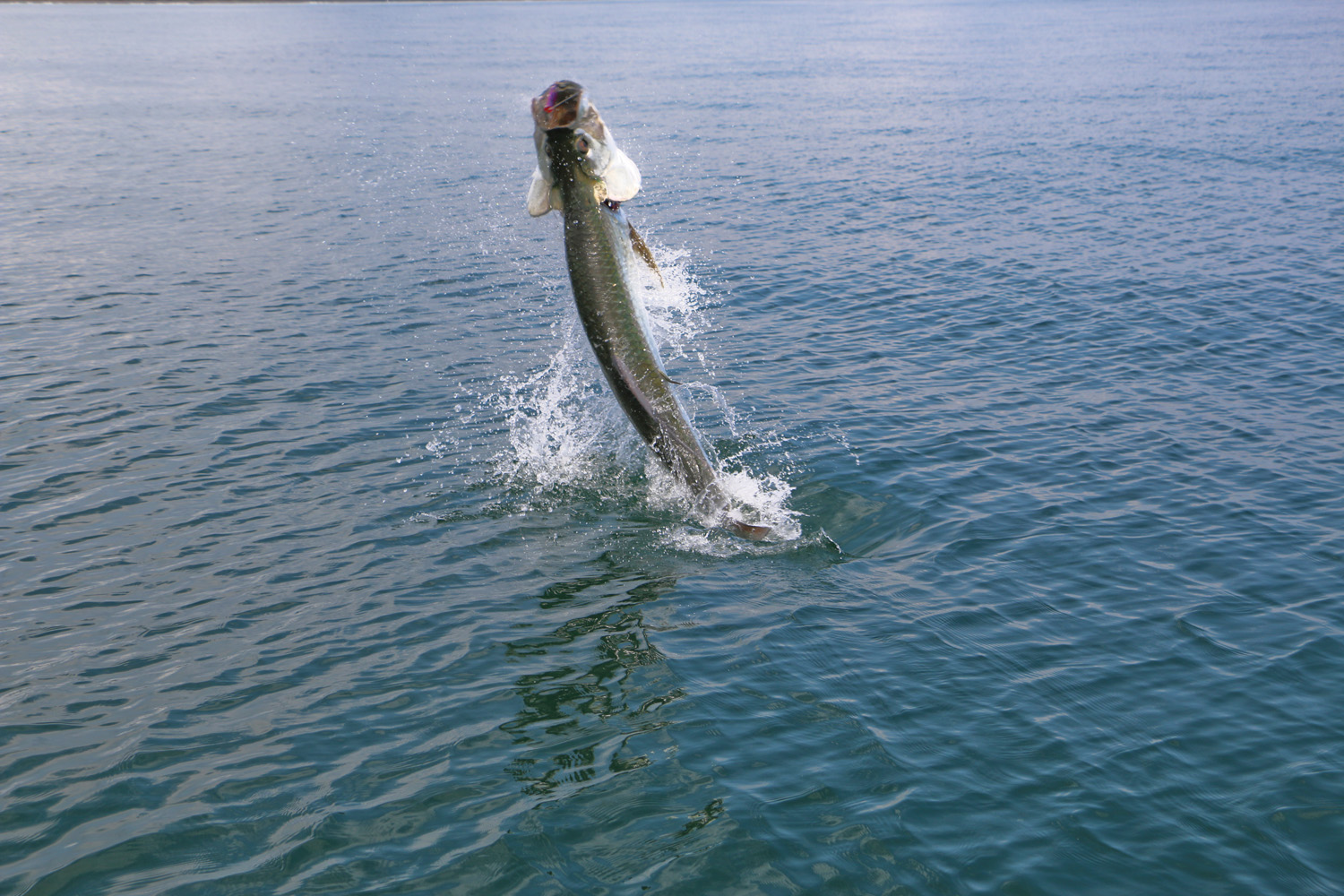 October and ice cream go together. The expression "ice cream," used to define excellent conditions, was coined by old salts decades ago, and early fall is perhaps the best time to consistently coincide with the primo combination of light wind and green tide.

This especially is true along the beachfront. The lulls between light early-season northers allow clear currents to push from the open Gulf and within reach of small-boat traffic.

Also, gradually cooling Gulf temperatures encourage predatory species to school up and move shallow. Some are staging prior to migrating; some are preparing to spawn; some are just there for the hell of it, to gorge on pods of milling baitfish.

For various reasons, the green surf can be "working alive" with aggressive fish – big fish. And, ironically, this beachfront bonanza can be a problem for the inshore boat rigged for a day of speckled trout and small redfish.

The typical casting outfit used for drifting or wading in the Texas bays is a light or medium-light action rod and a narrow-framed reel spooled with approximately 100 yards of 12- or 14-pound mono (or suitable braid). The spinning setup might be even lighter.

Regardless, these outfits are intended for casting payloads in the 1/4- to 1/2-, maybe 3/4-ounce range. The gear is great for a two- or three-pound speck or a five- or six-pound red, but maybe not so great for a 25- or 30-pound jackfish. Or a bull redfish or a "smoker" king mackerel. Not to mention a 100-pound tarpon or shark.

But you can grow semi-old over a lot of back-and-forth and give-and-take. And if you plan on releasing the fish it may be dangerously taxed during the prolonged struggle.

And you miss a lot of chances. The trout tackle is outclassed. The most likely culprit is the rod, woefully inadequate for setting a large hook in a hard mouth, or for turning and lifting a strong fish. Either way, the light blank can bend into the handle and not much happens on the other end.

To dredge up a tired old cliché, toting a trout rod off the beachfront and targeting the "big stuff" is like bringing a knife to a gunfight.

Rods aside, the terminal riggings almost certainly are suspect. A trout-sized plug or tail is a puny offering – and the relatively light shock leader might be frayed or cut.

The bay boater anticipating a chance at the open Gulf can significantly improve the program by adding a heavier rod and reel and packing a simple plastic box with a selection of suitable lures and riggings.

The upgraded outfit consists of a 7- or 7 1/2-foot medium-heavy or heavy action plug or spinning rod fitted with a reel capable of spooling at least 200 yards of 20- to 30-pound mono (or braid). This outfit is good for casting or trolling; stashed out of the way, it is ready for a quick draw when the "slick calm" surf beckons.

Equally important is the small plastic box. You don't need to go overboard stocking the thing. Terminal riggings might include several no-nonsense swivels and a coil or two of heavy shock leader – say, 40- and 60-pound mono or fluoro – and a small spool of flexible easy-to-knot wire. Several suitable hooks can be included if drifting natural bait figures into the plan.

Ten or 12 lures should cover the options. The larger 77M MirrOlures are excellent when casting for rolling tarpon or surface-schooling jacks. The 77M is 4 1/4 inches long and weighs 1 1/4 ounces. The three treble hooks are superior to those on the standard-issue 51/52 models, but still look a bit cheesy for big tarpon.

But, in my experience, they hold up surprisingly well.

I believe this is because the tarpon tends to inhale the plug during a rolling, turning grab and the hooks stick inside the big mouth; this contact seems to minimize the direct strain on the points and bends. The straight-line stress is against the line-tie eye.

I think this makes sense; for whatever reason, I've seldom seen a tarpon stuck inside the maw straighten one of the dangling hooks (most trebles are screwed up while trying to twist them free with pliers during the unhooking detail).

Another good choice is the two-ounce SPRO bucktail jig. These things cast like bullets and do a fine job of probing the water column – everything from big red snapper and amberjacks suspended deep to whatever might be blowing up on the surface.

The jig is rigged on a long-shank Gamakatsu hook. Inferior jig hooks have a tendency to open against a sustained pull, but I've landed at least a dozen 75- to 100-pound tarpon on the SPRO and do not recall any soul-deadening slack over a bent hook.

I can't say the jig won't fail on the next fish, but it's a well-made product. The downside is, the heavy lead head is alarmingly easy for a head-shaking tarpon to toss. But, for non-jumpers such as reds, jacks, and kings, no problem.

A couple of heavy-duty topwater plugs can help stir things up. Larger dogwalkers such as Heddon/Excalibur Super Spooks and MirrOlure Top Dogs certainly work, but offshore-type poppers probably are best for attracting fish in the deeper water of the open Gulf. Various two- to three-ounce poppers with heavy trebles or large single hooks are available.

A fine example is the six-inch Strike Pro – so good that Giant Trevally in the surf off Christmas Island took my last two. The Williamson Popper Pro 130 and (larger) 160 are other fine options. The bad news is, many of the "blue water" type poppers are expensive, in the $15 to $25 range.

As for trolling plugs suitable for 20- to 30-pound gear, the Rapala CD-14 Magnum (with metal lip) is a great choice. The Rapala plugs are time-tested and almost always run true at reasonable trolling speeds.

These are proven lures for beachfront fishing. Of course, many other solid products are available but these cannot be denied – at least, this is my opinion.

Clear green water favors lifelike finishes – silvers and chromes and greens and blues, that sort of thing. At least, I'll believe that if you will. The really jazzy stuff maybe looks better in sandy-green water – and funky, murky water happily is not our concern on these glorious early-fall days.

But what's up with purple? During the past few years, purple has become a go-to color in virtually every fishing venue around the world. Large or small, salt or fresh, regardless of clarity, they all seem to want a piece of purple.

A small box of lures cherrypicked from this list should suffice. The box can be placed in a dry-storage compartment or tucked under the center console. Then, when fickle beachfront conditions turn ice cream, you can rack the trout rods and ease past the nearest jetties and go take a few big-league swings with proper equipment.