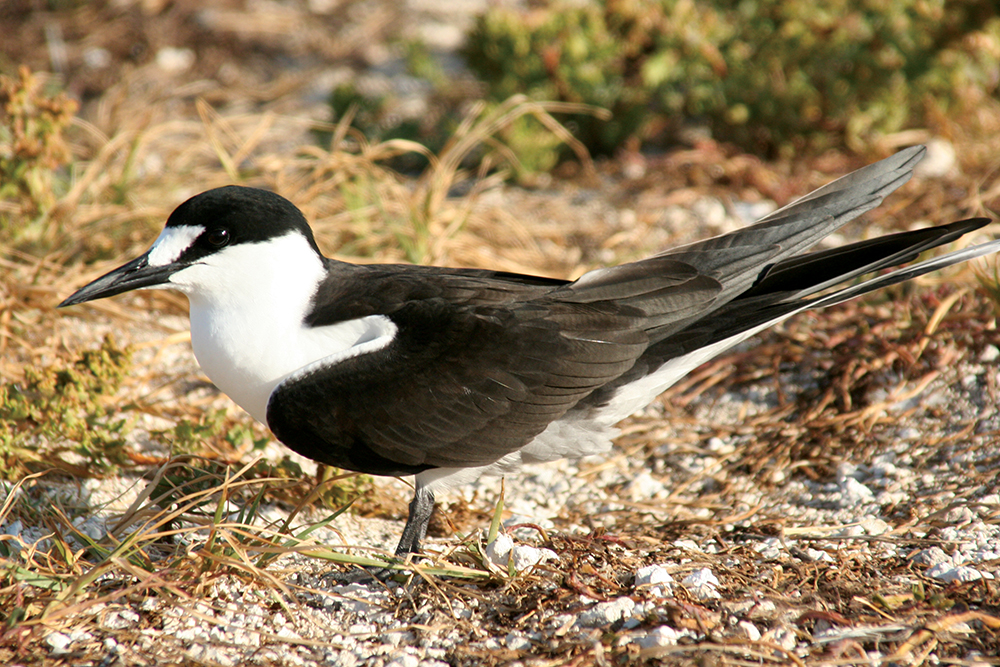 Our active pilot, who was also the first lieutenant of the Marion, pointed out to me a small island which he said was at this season the resort of thousands of birds, which he described by calling them ‘Black and White Sea Swallows.’
"Before we cast anchor,” he said, “you will see them rise in swarms like those of bees when disturbed in their hive, and their cries will deafen you."
You may easily imagine how anxious I was to realize the picture; I expressed a wish to be landed on the island; but the kind officer replied, "My good sir, you will soon be tired of their incessant noise and numbers, and will enjoy the procuring of Boobies much better."
~ John J Audubon’s Birds of America

The sooty tern, Onychoprion fuscatus, is distinctive among terns with its jet-black back, black cap, and crisp white forehead. A black stripe runs through the eye to the base of the bill. The legs and bill are also black, while the underside is white. The wings are long and narrow, emphasizing their structural resemblance to other pelagic birds such as albatrosses; the tail is deeply forked and black with white edges. The sooty is a large tern, averaging 16 inches in length with a 35-inch wingspan. It’s unlikely to be confused with any tern apart from the similarly dark-backed but smaller bridled tern (Onychoprion anaethetus). Bridled are much more extensively white and have a dark grey back rather than the jet black of the sooty, along with lighter undersides of the flight feathers. Juvenile sooties are black or dark gray with white spots and dashes on the back and wings, giving them a somewhat scaly look. While both the common name, “sooty,” and the species name, fuscatus” refer to the tern’s coloration, other common names associated with it are derived from its voice, a distinctive, piercing wackee-wak or ker-wack-a-wack. The incessant calls produced by a breeding colony have earned it the names wideawake tern and ʻewa ʻewa, which in Hawaiian roughly means ‘cacophony.’ Sooty tern colonies make so much noise that it is against U.S. OSHA standards for workers to undergo exposure to the noise for more than half an hour.

In most of Polynesia, this species and the spectacled tern (Onychoprion lunatus) are collectively known as manutara, literally "tern-bird.” On long voyages, Polynesian seafarers would inevitably find these birds, and usually in astounding numbers. On Easter Island, manutara played an important role in the tangata manu ritual (“birdman” ritual): whichever hopu (champion) could retrieve the first manutara egg from Motu Nui islet would become that year's tangata manu. The winner’s clan would receive prime access to resources, especially seabird eggs. Sooty eggs are considered a delicacy in the Marquesas Islands, where the tern is known as kaveka.

This tropical seabird is migratory and dispersive, with a more pelagic lifestyle than most terns. Of the 7 species of terns for which breeding evidence was found by the Texas Breeding Bird Atlas (TBBA) project, only sooties are truly pelagic, spending more than half of their lives at sea. They inhabit tropical and subtropical oceans worldwide, coming to land only to breed. They are often found near deepwater tuna schools when visiting the Texas coast and breed along the Lower Laguna Madre near Arroyo City from April to June. Occasionally, they are also seen along the coast at South Padre Island and Boca from April through September. There are many records along the coast and at scattered inland locations following tropical storms.

While other terns plunge dive to catch small fish, sooties can’t fully submerge (unless they’re near land) because their plumage isn’t water-repellent, and flying with soggy feathers takes more energy than they can afford out at sea. Instead, they use aerial-dipping, skimming over the water, or contact-dipping. They almost always feed in association with underwater predators, such as tuna and dolphins, which drive prey to the surface. They catch flying fish in the air and also feed at night, skimming fish that come to the surface when it is dark.

Breeding is one of the only times these birds come to land for an extended period of time. Due to the lack of oil in their feathers, sooties can’t float, and spend years out at sea entirely on the wing. Worldwide, sooty terns breed on small, islands throughout tropical waters, including those near Mexico, Central and Northern South America, the West Indies, the Hawaiian Islands, and the Dry Tortugas at the end of the Florida Keys. Sooties are reported regularly in Texas from late March to early October. Breeding occurs between late April and early July.

Highly ritualized and vocal aerial displays are conducted over nesting areas prior to settling down to lay eggs. During the courtship displays, mates will circle around each other, calling softly, their wings slightly dropped and their bill pointing downwards. On the ground, pairs will strut and bow to each other. Nesting locations change slightly from season to season, though some sites have been occupied for several centuries. They prefer to nest above flood tides, in flat, sparsely vegetated, and fairly open areas, such as open sand, rock, shell, or coral with vegetation. Where aerial predators are present, nests are often placed under shrubs or other vegetation. A shallow scrape may be dug or eggs may be laid on bare ground. These terns nest close to each other, about 8 inches apart, even when there is more space available. They also fiercely defend their colony by attacking intruders from the air. Heat stress may cause terns to abandon eggs temporarily. Sooties are easily disturbed by human activity, and repeated disturbance may result in permanent nest abandonment.

The female lays 1 to 3 speckled eggs, and the parents share the one-month incubation duty. When the temperature gets too hot, the parents will take turns shading the eggs with their bodies. Chicks are semi-precocial and able to walk very soon after hatching. Parents locate their chicks through vocalizations, and will feed only their own – a wholesome diet of regurgitated fish. Chicks fledge at about 2 weeks. Once fledged, the chicks make daily forays, returning by evening to be fed by the parents. After about 3 weeks, parents and their chicks leave the nesting island and spend 2 to 3 months together at sea before separating. From the end of fledging until their first breeding, at about 6 years old, most sooty terns won’t visit land. These long-lived birds (up to 34 years in the wild) have been extirpated by humans from a number of breeding islands through habitat degradation, egg-collecting, and the introduction of predators. However, as an exceptionally common bird – estimated worldwide population of 60-80 million – the sooty tern is evaluated as Least Concern on the IUCN Red List.

Where I learned about sooty terns, and you can too!