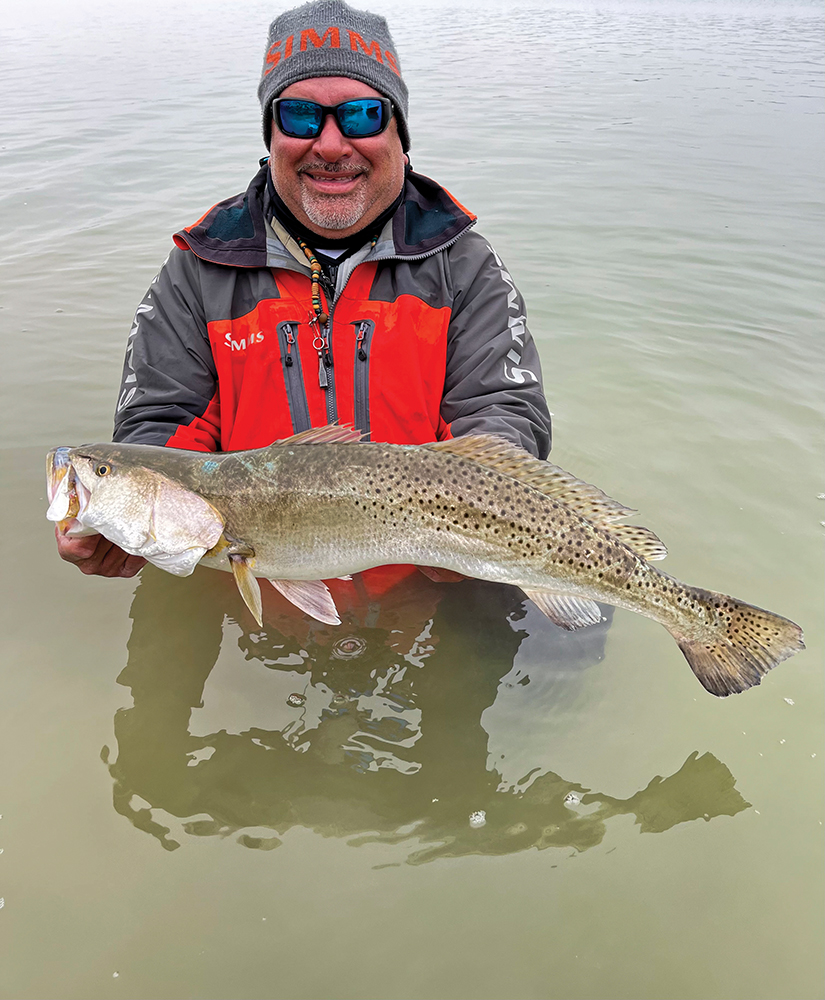 Post-freeze, Lower Laguna nine-pounder! This fish has obviously been through quite a few winters, thanks to CPR she will spawn again this summer and live to see another.

A month has passed since the February freeze and it is now evident that fisheries in some areas along the coast incurred more damage than others. A common denominator among the areas least affected is the amount and location of deeper water within the bay system where fish can escape bitterly cold temperatures. I promised myself not to spend much time on the damage and the numbers of dead fish; by now most anglers are fairly well informed and have heard and seen enough. Instead, I want to focus on my observations, what I learned, and perhaps educate you a little on the size, depth and layout of the Lower Laguna Madre.

My first post-freeze observation was 38° surface water temperature as I launched my boat. The surface temp was warmer as I entered the Brownsville Ship Channel and I was very surprised to find 58° at the end of the turning basin. Switching the screen to sonar, I could see large concentrations of gamefish and baitfish suspended between 14- and 20-foot depths in most of the places I checked. I dropped a thermometer to those depths and it read 62°! The fish I was marking were obviously comfortable and active. I will come back to this observation as I explain the layout of our Laguna.

So, our Lower Laguna covers roughly 270 square miles; about 55 miles in length, and 4- to 6-miles wide. The average depth is a bit more than 3.5 feet. Like an hourglass, it is wider at the north and south and narrow in the middle. The north and middle sections are generally quite shallow while the southern portion holds large areas of deep water – Brazos Santiago Pass, the area under the Queen Isabella Causeway, and the Brownsville Ship Channel.

Looking at the February weather history, we had received two cold fronts just prior to the big one that arrived on February 14. My speculation, based on my knowledge of the Laguna, is that our fishery south of the Arroyo fared better than the areas to the north, due to the prior north winds having pushed many gamefish and baitfish toward the deeper and warmer waters located on the south end. That we were able to find and catch trout and redfish only a few days after the big freeze would seem to bear this out.

Another thing I would point out is that prior to the freeze we were not seeing the usual number of large trout on the flats. While disappointing at the time, one could speculate further that those large trout were already staging deeper, in warmer water that ultimately saved them from the extreme cold that killed so many in shallow water farther north.

The good news is that we are currently catching solid trout in small areas of the bay since the freeze and they seem to be holding in tight schools. If you're not on top of them or near them, your efforts are fruitless. Hopefully, as the water continues to warm they will begin to spread out and we will be able to target them in more places.

From what I have seen recently, I would say that redfish came through the freeze in much better shape than our trout. After the warming trend set in, I ran into a school of redfish that appeared to number more than a thousand.

Remarkably, though, we caught only one. The rest simply refused our presentations. My guess was that they were not ready to feed after the stress they’d been through during the freeze.

Another very positive observation; I noticed very few dead snook during the warmup following the freeze. Snook are a tropical species and begin to suffer stress when water temperatures dip below 60° for extended periods. Thankfully, the majority of that fishery was evidently already tucked away in deeper, warmer water.

The Houston Fishing Show will be held April 14 through 18 at the George R Brown Convention Center. I will be there along with the entire Fishing Tackle Unlimited Pro Staff. Come by for a visit and check out the new Excel Green Rods and take advantage of the many great deals they will be offering.

I'm neither a game warden nor a biologist, but we have all seen the damage from this unusual weather event. It will take some time for the hardest hit areas to return to normal. Now more than ever, we should all practice good conservation. I do not oppose anyone taking a fish or two for a meal, but taking a limit is probably not the best idea at this time.