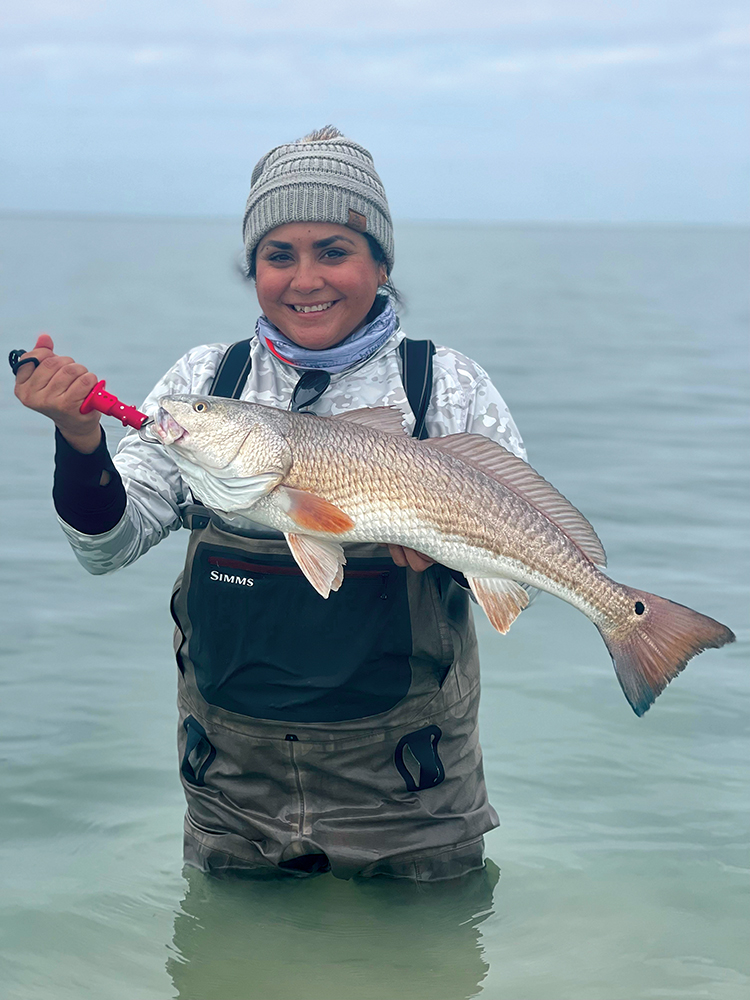 Elisa Mares displaying one of many redfish she caught this day.

April is a great month for landing a personal-best speckled trout. Not only are they still winter-fat, they are also carrying lots of eggs. I often recommend February as the best trophy month, given that trophy fish are often staged together in sizeable numbers. I follow by saying that while they may be scattered due to higher tide levels, the additional egg weight in April can easily push an eight-pounder to nine pounds.

Peak trout spawning occurs on two-tide days, which generally fall a few days before, during, and after the new and full moon. This is nature at work, the stronger tidal currents help transport the fertilized eggs to grassy flats where the hatching larvae have greater chances of survival.

I loved April as a young boy. We were really into kites, even building some of our own. However, as a fishing guide, I no longer have such fondness for windy days. Extreme wind churns bottom sediments that turn the water muddy and seagrasses get uprooted and collect on the surface in many of our most productive areas. Working topwater lures becomes all but impossible. While we cannot stop any of this, we can learn how to use the wind to our advantage.

Springtime winds also churn up lots of tiny shrimp, crabs, and other crustaceans, and their presence in the water column can produce frenzied feeding by trout and redfish. This activity alerts seagulls that will hover above them. I have experienced this phenomenon mostly in late afternoon and early evening. Another benefit of wind is the way it increases the oxygen content of the water, which helps increase fish metabolism and feeding activity.

Over the year that has passed since the big freeze, I have concluded that our bigger trout took a very bad hit. Don't get me wrong; there are still some big trout out there, but definitely not in the numbers we have seen in the past. In general I would say our trout population is rebounding very well, but it’s going to take another year or two to fully recover. We have seen schools in the four to six-pound range where they should be this time of year, but the seven, eight, and nine-pounders are conspicuously very few in number. Hopefully the new trout regulations and continued efforts of conservation-minded anglers will speed the recovery.

This past winter, including March, I have observed trout migrating more than I’ve ever seen between cold fronts and warming trends. Here one day and gone the next, only to return as the winds begin to lie and the temperatures started climbing.

Air and water temperatures will soon be on the rise and the tendency for surface feeding will follow. Changing topwater hooks from treble to single is recommended to deal with floating grass. Look for active bait along shorelines. Potholes will continue to attract trout on grassy flats. Areas near the ICW will hold good numbers of trout although smaller on average.

Redfish are thriving. A year after the freeze; we're catching redfish everywhere they should be and lots of them. Sizewise, I cannot recall slot redfish as large on average as we have been landing the past several months. In addition, we are also seeing plentiful numbers of smaller reds, which is great news for the future of the fishery.

Reds have been taking topwaters with a vengeance, and this pattern should only continue into April. When they will not take a surface lure, changing to any of the Corky family or the old reliable plum-chartreuse KWiggler Ball Tail has worked well for us. Back bays will bring excellent opportunities as tides will be running considerably higher. Edges of shorelines along any landmass or spoils off the ICW will also hold plenty of redfish. Finally, don't dismiss the sand flats on the east side; they always come alive in springtime.

Flounder are showing sporadically. Incidental catches have increased over the last month and hopefully will become more numerous with warmer temperatures. Snook continue to thrive as they seek deep water in winter and were unaffected by the freeze. I expect they will become increasingly available throughout the spring months.

Prepare for windy conditions. If your preference is drift-fishing, have two windsocks handy. I’m looking forward to wet-wading season but jackets will be necessary for at least another month, maybe more. I recommend keeping only enough for a fresh meal, which gives good reason to go fishing more often. And if you’re not into fishing windy days…go fly a kite!