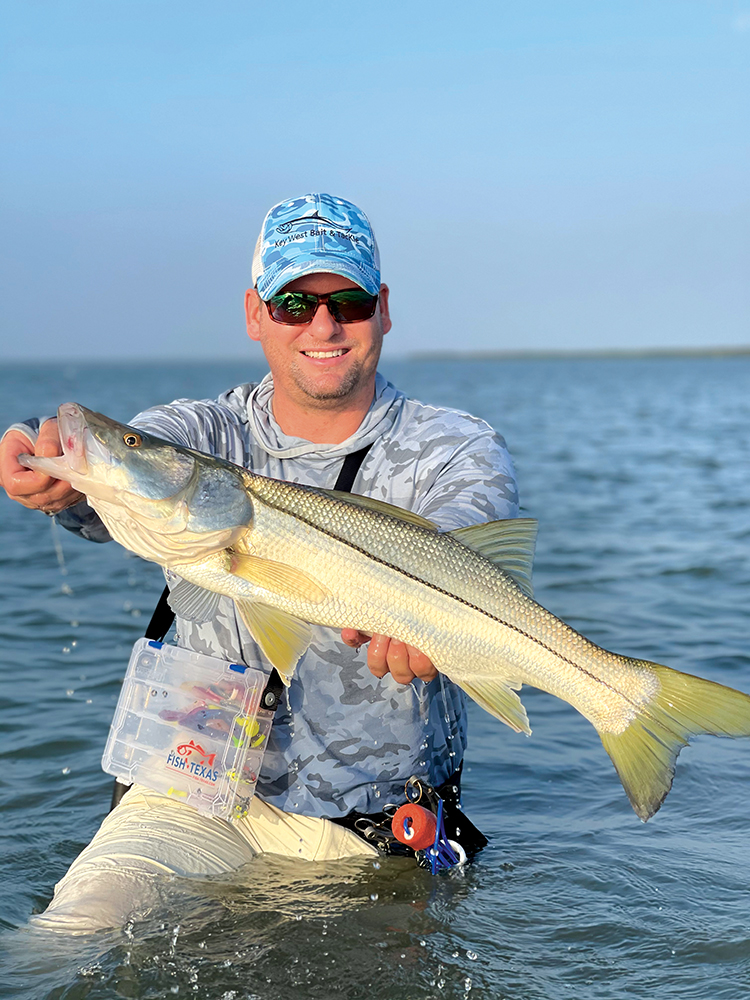 July marks the middle of summer and lots of folks will be hitting the water. Winds tend to be light, so light that we will sometimes pray for a breeze to cool things down a little. Lower Laguna tides are very high right now in mid-June but will drop to some of the lowest levels of the year next month. And while tides fall the water temps will soar.

Getting an early start to your fishing day can be very important. I sometimes recommend splitting the charter day; a few hours in early morning and then a few more in late-afternoon. Extra caution is advised when navigating due to the low tide levels we will be dealing with in late-July.

Two important tips for July fishing – Treat midday heat the same as wintertime cold. Fish will tend to move to deeper water for temperature relief, so work your lures low and slow to entice them to bite. Also of great importance is moon phase. Fishing during full moon periods can be especially challenging, even more so in the several days following the big moon. There are many theories about this and I’m not saying you cannot catch fish because there are always exceptions. What I find most effective though is fishing the late-afternoon and evening hours following the full moon.

Currently, our success with redfish seems to be turning toward a hit or miss situation and I expect it could get tougher as tides recede and the water continues to warm. Patterning them becomes difficult as they are in smaller groups inhabiting smaller areas of our bays. The eastside sand flats are an exception if you can be there before the sun gets high and they become spooky, but here again they tend to be somewhat scattered.

We are still focusing on sandy potholes along shorelines and spoil islands when the tide is high and some schooling is being seen as incoming tides push into back lakes. Naturally, the reds are following the bait that is moving with the tide. When the tide is receding we find them in and around marsh and back lake drains. As for lures; Kwiggler Ball Tails are great for probing potholes and weedless Willow Tails are a favorite whenever the reds are holding in shallow, grassy areas and also whenever floating grass becomes troublesome. And, it goes almost without saying – keep a weedless gold spoon in your wade box.

I wish I could say that trout fishing in the Lower Laguna is everything we hoped it would be but that is just not the case. The most consistent catches have been coming from deeper water and, by far, the greatest numbers are being caught by fishermen using live bait. You can find lots of fish with lures under birds but nearly all are undersize.

The best strategies lately have been working slicks and deep-jigging the edges of the ICW and other channels with KWigglers Ball Tails. Fishing on moving tides has been best, incoming or outgoing doesn’t seem to matter, just so it’s moving. Try 1/4-ounce jigs and cast out deep, then hop the lure methodically back up along the dropoff. This method has been giving us a few decent trout and an occasional flounder or two.

We wait all year for snook to make their way into our shallow bays. I was very concerned how the snook might fare during the February freeze but thus far I would say we are off to a decent start with my clients having already landed several trophy specimens. Wading for trophy snook is never easy and we sometimes fish all day with only one or two bites. But, believe me when I say it is all worth it when a trophy linesider smashes a topwater and begins its acrobatic routine. If you want to target snook, look to the days with strongest tides and concentrate on the solunar majors and minors.

Flounder are not especially plentiful this summer but if you put in some time working guts, the edges of potholes along the spoils, and the dropoff on the ICW, there's a good chance of landing one or a couple, or maybe more. Keeping your lure in contact with the bottom as much as possible will always produce best, and smaller plastics will usually draw the most strikes – especially paddletails.

If the fishing gets as hot as July's weather we’ll all be in for a big treat. But in the meantime, think winter in the summer for effective lure presentations. Keep an eye on the weather, July thunderstorms seem to pop out of nowhere.