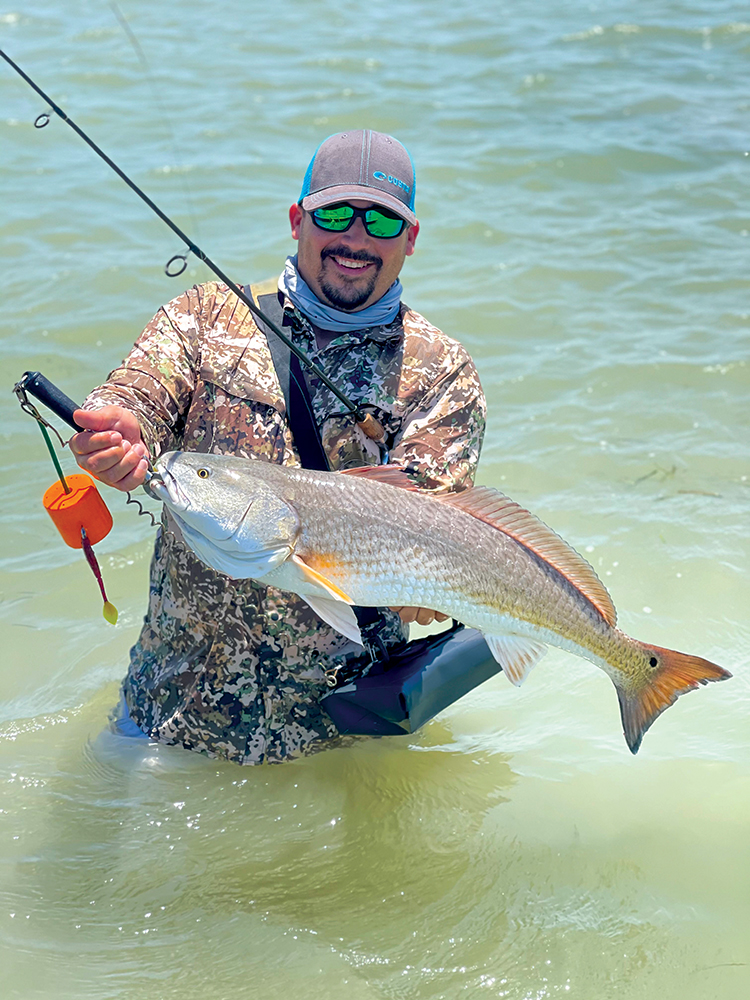 Gus Henggler and a bruiser redfish; 31-plus!

I will forego my usual opening paragraph analogy this month and dive straight into current fishing conditions in the Lower Laguna Madre, and compare what we are seeing with prior year’s experiences. As most of you are aware, the February freeze had a serious impact on our fisheries. Three months later we are seeing and feeling it. This is not to say fishing is terrible because we are still catching fish. In fact, we’ve had some truly outstanding days. On average, though, our trout landings have been significantly fewer and the size of the trout is much smaller.

Shortly after the freeze we were landing many big trout that were staged in ten- to twenty-feet of water along deep channels by bouncing soft plastics rigged on 3/8 and 1/2-ounce jigs along the bottom. As the water warmed to the mid-70s the trout disappeared from the deeper water and we have yet to pattern them on the flats. Even smaller trout are scattered and in fewer numbers.

There’s no doubt our trout were hit hard by the freeze. With the new trout regulations being enacted April 1, 2021, my sincerest hope is that the three fish bag limit (with slot size 17- to 23-inches) will create greater spawning success to restore what was lost. We realize it will take several years, but by practicing more catch and release than ever before we can hopefully speed the recovery.

Our redfish population is in much better shape, considering that they too suffered during the freeze. The main difference we’re seeing lately is that reds are concentrated in smaller areas, mostly tucked away from boat traffic, something we do not expect until late-summer. The good news is that they are taking topwaters very readily and have been a lot of fun to catch. I attribute this to the overall shortage of baitfish following the tough winter.

Redfish have always been willing to hit plastics and our go-to lure continues to be the KWiggler Ball Tail in plum/chartreuse, rigged on 1/8 and and 1/4-ounce jigs. One thing that determines my bait choice is the number of mud boils I see while wading. If the mud boils are frequent my first choice will be the Ball Tail worked low in the water column. Lackluster strikes without commitment on topwaters are another sign to switch immediately to plastic.

Most of our steady redfish action has been around schools of finger mullet against shorelines and in back lakes on incoming tides. The flooded back lakes often have numbers of tailing reds visible, some cruising with their backs exposed, on calms mornings. On some lucky days we have seen as many as 50 redfish in small schools. Competition for food when they’re grouped this way makes for exceptional action. Also, on days when the wind reaches 25-mph and stronger, we have been seeing lots of gulls and terns hovering above the schools, picking off shrimp rooted from the mud by the feeding reds. Bird action should continue as long as windy days are part of the daily weather pattern.

I wish I could report steadier trout action. The trout we are catching have been around potholes, shell, and semi-muddy bottoms. Topwaters have been producing only a few solid strikes. We have been extra cautious in handling and releasing our trout, and if you want to see the trout fishery flourish again, I suggest you should do the same.

The best times to target the larger females will be during full and new moon phases as these are peak spawning times and this will continue through summer. Trout, especially, feed more aggressively when the water currents tend to be strongest. New and full moon phases typically give us two tide days with strong flows, which is another good reason for targeting larger fish at these times of the month.

Flounder are just recently starting to show in small numbers along the ICW and near Gulf passes. We haven't had a stellar spring season on these bottom-dwellers but we are hoping their numbers will increase soon.

It would appear that our snook fared quite well through the freeze, from the Arroyo Colorado down to Port Isabel. Weather patterns have been keeping them off the flats but that should change as soon the weather stabilizes and summer heat sets in. From what we experienced and caught this winter there should be plenty of linesiders to target this summer.

June will be a busy month on the water. Please be courteous and extra cautious, especially on crowded weekends. Wear your kill switch at all times when underway. Best fishing!