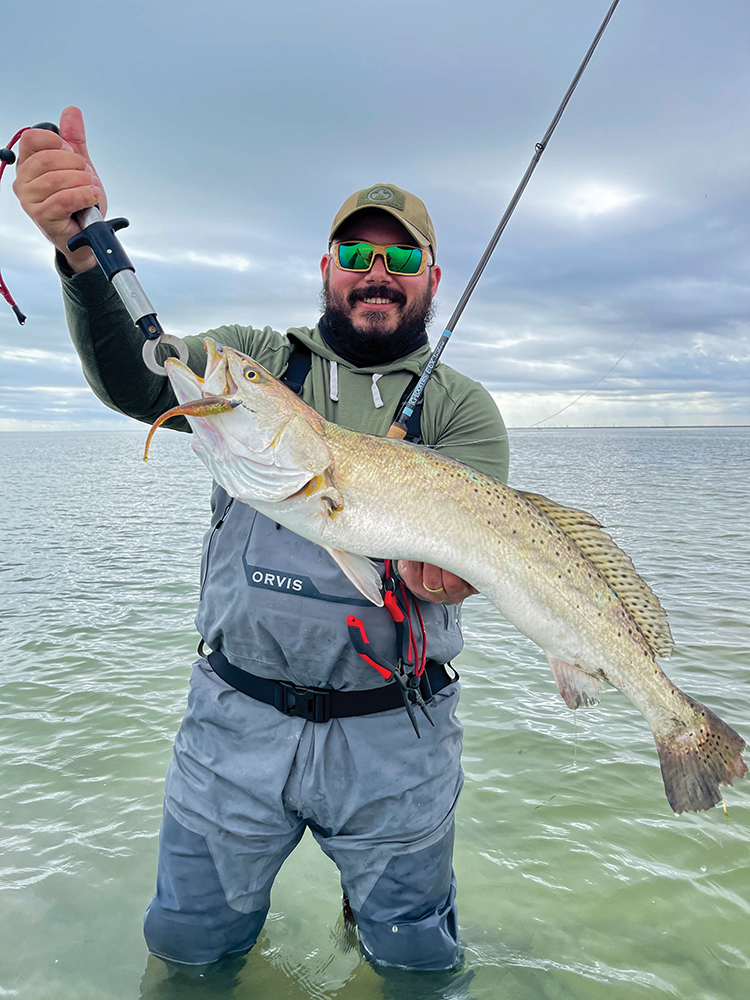 Many things occur in our bays that cannot be predicted while others happen like clockwork. During my high school years, March was all about spring break. We’d be out of school for a week and practically lived on the beach. Loads of fun for everyone, plenty of loud music, and everything that comes with being a teenager. You could bank on it. Nowadays, as an adult with a fishing obsession, March occurrences I can predict accurately are rising tides, warmer weather, the beginning of trout spawning, and locations the fish should prefer. Notice I used the word should. March’s unpredictable side means we still have to do our homework and get out there and find them.

From experience over the years, I can predict that close to the third week or so in March, the tides will begin to rise considerably. And, with that said, fish will begin to cruise with the rising tides into areas of recently barren or mudflats too shallow for them to inhabit.

The big trout will follow hordes of mullet onto shallow, grassy flats. Most of the spawning trout will lay up along tucked-away shorelines, away from boat traffic and most anglers. The most prolific spawns will occur on strong tides that occur during new and full moon phases – two tide days. April gets most of the glory as regards spawning activity, but don’t be fooled. We have caught trophy-size fish dripping eggs in March.

Redfish have been very predictable over the past month, especially during cooler periods with lower than normal tides. I expect they will begin to scatter somewhat as the tide rises and opens new territory. We will also begin seeing more brown shrimp and you can bet the reds will gorge on them every opportunity.

I like to target reds on recently flooded flats and shorelines in March. Signs of their presence will be numerous mud boils visible from the boat when running and brown shrimp skipping across the surface. Look for active mullet on shorelines and in nearby potholes. March can be tough with the wind and all, but redfish use wind to their advantage and you should, too. Strong winds pin shrimp, small crabs, and baitfish against shorelines. Seagulls will be hovering and diving. Don’t ignore the signs!

It’s hard to beat KWigglers Ball Tail Shads for redfish during early spring. My favorites are the Plum-Chartreuse and Mansfield Margarita. Not saying KWigglers Willow Tails won’t work, but I prefer the Ball Tails for the faster sinking qualities. Don’t let the wind get you down; just like you, redfish get hungry on windy days the same as calm days!

During January and early February, the bigger trout tended to congregate in deeper holes due to the cooler temperatures and lower tides. The same as stated above about redfish, I expect rising tides and warmer weather will cause them to begin dispersing more widely across the flats. Keep in mind that binge feeding under optimum conditions will likely mean they will not eat every day. Maybe only every other day. What I’m leading up to is that if a trophy trout is your goal, you must be ready to patiently put in lots of time. Wait them out until they’re ready to eat.

You probably wouldn’t believe how many phone calls I receive, people saying, "I want to catch a thirty-inch trout." My answer to them is always the same, "So do I, and I spend over two hundred days a year on the water and haven't caught one." That’s not exactly true, I have caught some giants over the years. I do not say that to be mean but to help them manage their expectations. The reality of the matter is that it takes hundreds of hours (on average) and the right conditions to land a trophy fish. The good news, I tell them, is that we will be fishing areas known to produce trophy fish, and I leave it at that.

Trout will begin showing preference for sandy potholes during March. If the water conditions do not allow you to see them, a good satellite image on your GPS or Google Maps can put you in the general area. Keep in mind that looking for clean water this month might be challenging, especially when the wind pushes toward 30 mph.

A few words of caution in closing; Always check the weather forecast before you go. March winds are some of the most dangerous of the year. Let others know where you intend to fish and when you plan to return. Wear your kill switch lanyard.

Best fishing and be safe out there.