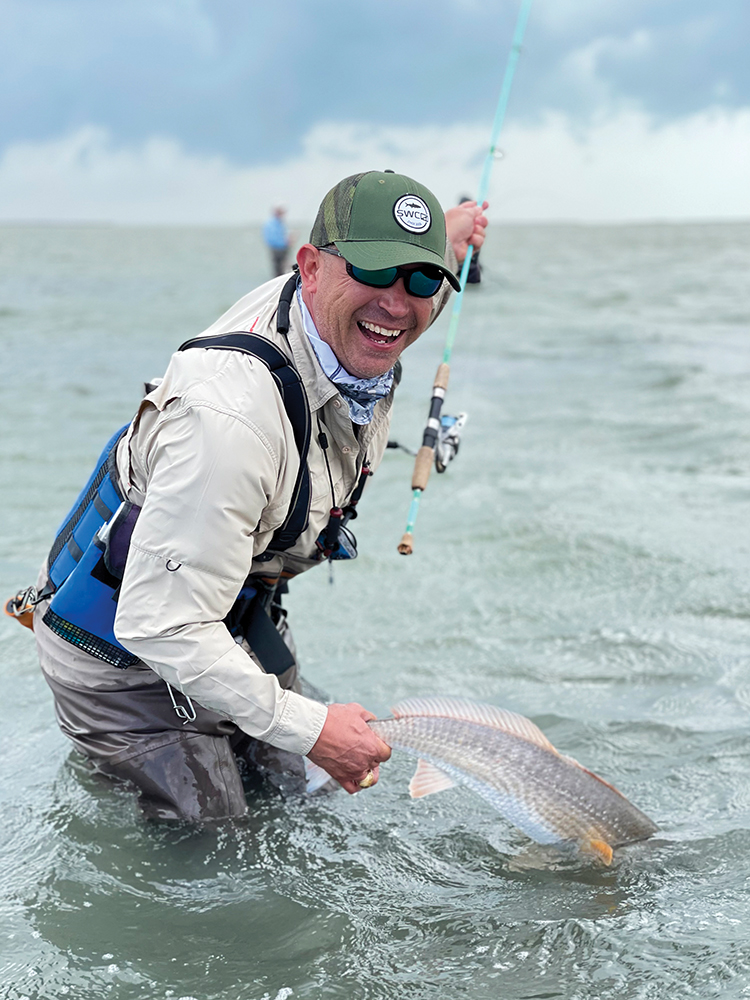 Hector Guerra's reaction is how we should all look when we're landing a good one!

I will begin with a question. How do you rate your punctuality; are you always on time or constantly running late?

Being too early or too late to an area can be crucial to your success. If you have fished long enough then you know what that's like. On some occasions these decisions can lead to discouragement and eventually cause you to leave a productive area too soon. On the other hand, getting there too late is almost as bad as, "You shoulda been here yesterday."

I recently had a group of anglers for two days of fishing. After a slow morning on their first day, the bite suddenly turned on around noon as we ran into a large school of redfish. Everyone was catching solid fish one after the other. The bite lasted two hours, which coincided with a solunar major feeding period. We were excited to return to the same spot the next morning, much earlier in the day than the previous day’s catching. Disappointment set in quickly as only two small redfish were caught in two hours of effort. What was different from the previous day? To start, the fish basically weren't there; the tides were lower than the day before and the bait was not as abundant nor as active. From experience, and to our dismay, I realized we had showed up at the party too early.

It goes to say that I like fishing because every day is different; as conditions change, fish patterns change accordingly. So it becomes a chess game trying to figure out the moves or migration of the fish we are after. This is always challenging but that's where the fun lies.

Keeping a log of successes will make you more consistent in the long run. Not only good observations during successful days, but also when the catches are few. Ask yourself during and after an outing: What were the tide and weather conditions compared with recent successes? What were the solunar feeding periods? All we can do is learn, apply, and hope the fish cooperate. Bottom line, being too early or too late can bring a humbling experience.

We are seeing steady redfish action although not all flats are holding redfish. For the most part they are still holding in pockets and not widespread as before the freeze. Areas to target are those with plentiful bait – mullet and brown shrimp. Small topwaters have been especially effective in and around potholes where bait is most active. KWigglers Willow Tails and Ball Tails are also drawing lots of strikes. Noteworthy is the number of undersized reds, which is a good sign for the future of the fishery.

Coming off a rather dismal winter trophy season I was very apprehensive about the condition of our trout fishery after the freeze. Having said that, I am happy to report that the waters south of the Arroyo Colorado and down to the Brownsville Ship Channel are now holding surprising numbers of respectable trout. Over the past two months we have caught more big trout than the past two winters combined; the majority of which are coming from or near deeper water. KWigglers Ball Tails on quarter and three-eighths jigheads to reach the depths of ten to twenty feet has been the key to our success. We have also been finding some respectable trout on the flats as they transition toward traditional spawning areas. I expect increasing numbers of larger trout will begin showing up on the flats as the water continues to warm.

Our trout will be spawning steadily as summer approaches and I would like to encourage all anglers to practice catch and release to boost the reproductive cycle and speed the recovery of our fishery. Texas Parks and Wildlife have enacted emergency regulations to further benefit the species. The lower portion of the Laguna Madre wasn't hit nearly as hard by the freeze as Arroyo City and Port Mansfield. So, while it appears that trout may be flourishing in the southernmost region of the Lower Laguna, taking care of what we have down here will no doubt be critically important to the recovery up there. The topwater bite should really turn on this month. Key areas to focus on will be potholes on flats, spoil areas, and bait-filled shorelines.

My overall assessment so far; Port Mansfield and Arroyo Colorado areas were hit hard by the freeze, but now fish are starting to make their way to areas that were once void of bait and gamefish. Let's be proactive and not reactive. Keep only what you can eat fresh and let the rest go to continue spawning. Best fishing!