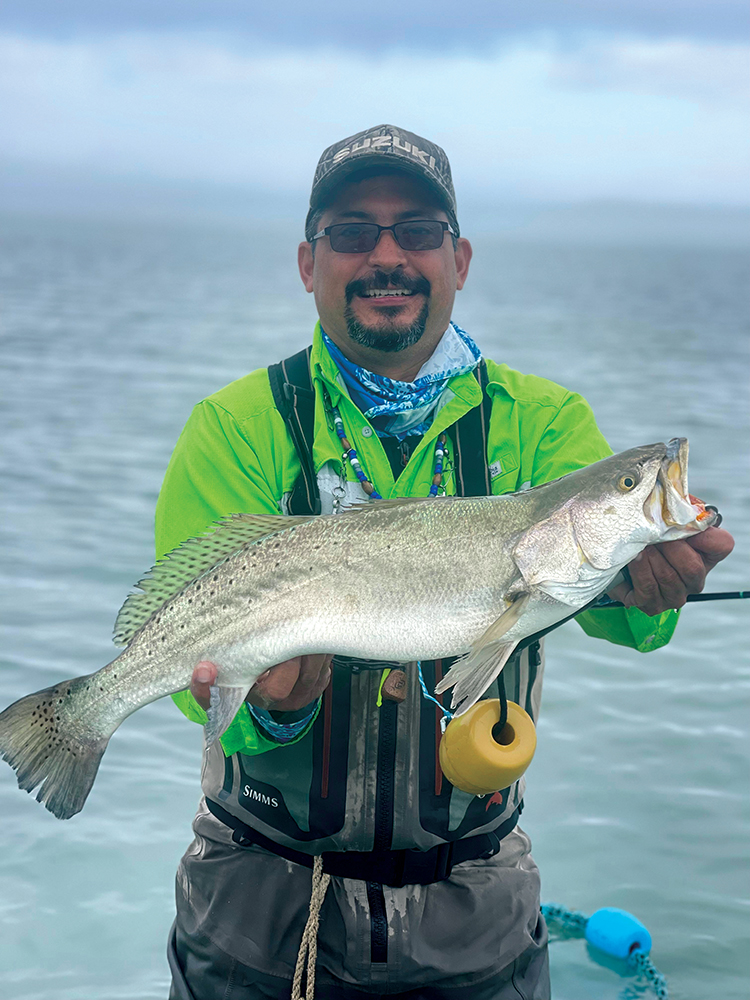 I mentioned last month that the South Texas wind would switch to predominantly south and southeast this month. Boy, have they ever! Right now it’s blowing 40 and gusting to 50, which would make even flying kites difficult.

This got me to wondering how fish in shallow water deal with the situation, being constantly pushed by such strong currents. Luckily, when winds have been moderate and water clarity remaining sandy to somewhat murky we have been enjoying great fishing success. Sometimes we need to relearn that fish need to eat even in less than ideal clarity conditions. Here’s to hoping for some calmer days ahead.

Our bigger trout catches took a slight uptick as of my last article, and currently we are continuing to bring a few of the bigger ones in front of the camera. I've noticed, though, especially early in the year, that the bigger trout have relocated several times to what seems less-traveled areas. It is known that if a bird's nest is disturbed by a potential predator during its nesting or egg-laying stage, there's a possibility it will desert and re-nest. So, because of fishing pressure and traffic, our bigger trout have relocated to nearby less-traveled zones. The trophy caliber trout continue to be in smaller numbers compared to years past, but it's great to see that there are still a few big ones out there.

Trout have been feeding actively on the surface, which means they’ve been hitting topwaters with a vengeance during prime feeding periods. Even during non-prime feeding periods a slow retrieve has been enticing them to bite. It's been fun with explosive hook-ups and heavier-than-normal weights as they are full of eggs in preparation for spawning during the coming new and full moons and stronger tides. Another aspect that increases excitement and productivity is the numerous slicks we are able to key on. Patience is the byword though, there’s always lots of smaller and aggressive male trout shadowing the larger females this time of year. I am a big believer in limiting my search for big trout during spring, keying on the strongest signs of fish feeding activity and usually hitting only three areas during an entire day.

Overall, I will say our trout fishery is looking better than I expected. We are currently catching many undersized trout in many places, which is a good sign for the future, and plenty of keepers that many of my clients have chosen to release.

Redfish remain abundant and they too are providing excellent topwater action. We are finding lots of slot and upper-slot specimens along with strong numbers of smaller fish which, the same as with trout, is an excellent sign for the future of the fishery.  While not seeing large schools recently there have been numerous pockets of slot-size fish to work with most days.

Right now we are keying on smaller, active mullet on grass flats in two to three feet of water. Redfish can also be found along the edges of spoil islands and other sandy bottom areas where bait is plentiful. May has traditionally been an excellent time to target redfish as they begin to form summertime schools and their size will also increase as they grow rapidly in the warming waters. The trusty old plum-chartreuse KWiggler Ball Tail is hard to beat when the reds will not go on top. Ditto the new Wig-A-Lo, which has lately become a great choice for redfish, trout, and even snook.

May marks the beginning of the tournament season and summertime crowds on the bays. Please use caution and courtesy as it will soon be get busier than ever.

Perhaps a product of summertime boat traffic, I have observed the past few years that the new moon feeding patterns have not been as favorable as in years past. I still follow the solunar major and minor feeding predictions very closely but do not find them as consistent as they once seemed to be.

The water has warmed sufficiently that we no longer need our Simms waders on a daily basis. Saying that, I want to remind all anglers that along with warmer air and water temperatures comes the nasty water-borne bacteria that can cause serious and even deadly infections in open sores and wounds. So, while waders can be uncomfortable in warmer conditions, I suggest you do not wade unprotected if you have any such condition that might invite infection. Also, any cuts or scrapes incurred while wade fishing should be cleaned and disinfected immediately and you should also seek medical treatment as a precaution.

Stay safe out there, help conserve our fisheries, and enjoy the Laguna Madre.