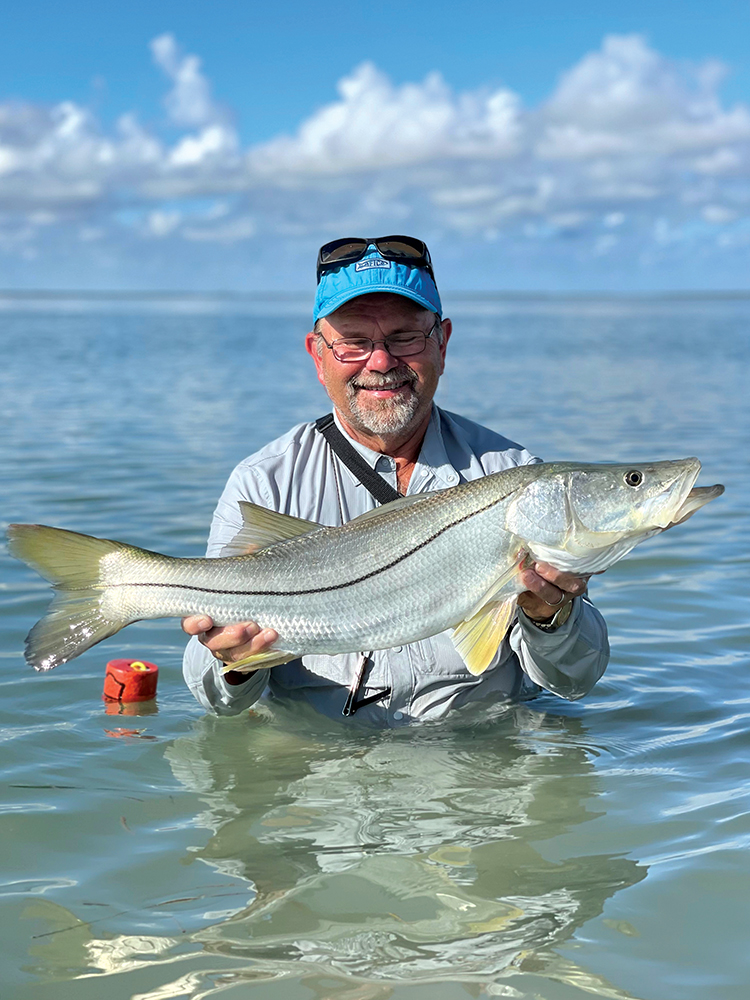 Stacey Schaaf admires a trophy snook as he prepares for another successful release.

Last month I reported the most challenging summer fishing I had ever experienced. Not only were fish hard to find, it was tough getting them to bite. Then suddenly the winds laid, the waters calmed, and redfish began showing in schools in many areas. It's been a while since I’ve seen them so plentiful.

Droves of redfish have showed up along shorelines and many ICW spoil islands, and also on the flats. Little to no wind during early morning has been revealing their telltale wakes as we cruised the flats. It has been a beautiful sight and my hopes for the fall season suddenly became much brighter.

Tides have been rising; typical for this time of the year. I am often asked, “Which tide do you prefer – high or low? My answer to that is, "If you had twenty guppies swimming in a bathtub and transferred them to a swimming pool, where would you have the best chance of catching one with your bare hands?” Given the choice, I prefer lower tides because fish become concentrated in smaller areas. But I will also say that I prefer a moving tide, whether high or low.

October days will become noticeably shorter and cooler, which should improve the daylight bite as fish will no longer need to stage in deeper water for long periods to remain cool. As the winds continue to lay and the water temperature declines, fish will become more active and water clarity will also improve. Look for the sand/grass transition on the east side to turn on as there tends to be plenty of shrimp, crabs, and small baitfish available during the fall months in that area.

Back bays on the west side will also hold plenty of bait. I like to target areas with numerous potholes amid mostly grassy bottoms. I mentioned spoil islands earlier and these too should continue to hold lots of redfish. Let’s keep our fingers crossed that my predictions for excellent fall redfish action hold true.

A few years ago I wrote often that consistent trout action kept our interest level up. Sadly, this is no longer true. Our daily trout landings are far fewer and the average sizes do not compare to what we enjoyed prior to the February freeze. A few areas continue to hold trout on a consistent basis but catching them is strongly dependent on tide movement in the area. The decline in trout numbers is noticeable everywhere from Port Isabel to Port Mansfield.

Many fishing tournaments were held over the summer, and I will be honest, it was disheartening to think that our trout would receive a beating during those events. However, a big round of applause is due all the tournaments that stepped up and implemented trout-friendly formats by either removing the trout division entirely, reducing the traditional numbers to be weighed, and/or encouraging live weigh-in.

Snook fishing continues to be better than in the past couple of years. Over the last month my clients have landed some trophies and many smaller ones. I am often asked if the snook population took a significant hit during the freeze and my answer to that question is no, they actually fared quite well. Luckily, our snook were spared devastation through their natural tendency is spend the colder months in deep channels. My outlook on snook fishing for the fall looks promising. I say this based upon our recent catches and the numbers we’ve observed roaming the flats recently.

Flounder fishing has been dismal for quite some time now. Lately, there have been some catches on my charters but nothing like the past. Success among tournament anglers has also been quite low with many commenting how tough it was to get a flounder. Hopefully the most recent regulations set by Texas Parks and Wildlife will contribute to a recovery of the species.

I will leave you with two things to ponder. First – fishing is a pastime we can enjoy throughout our lives. Second – we have all seen our bays suffer greatly, either through natural events or by the hands of mankind. It's up to us to respect and conserve our fisheries for the future.

Please handle undersized fish with care as they all have potential to grow to trophy size. And, just because the law says you can keep a certain number of fish doesn’t mean you have to. I encourage keeping only what you will eat fresh and release the rest. I liken it to driving, just because the speed limit is 75-mph doesn’t mean you have to drive that fast all the time.

Fishing in Concert with the Moon