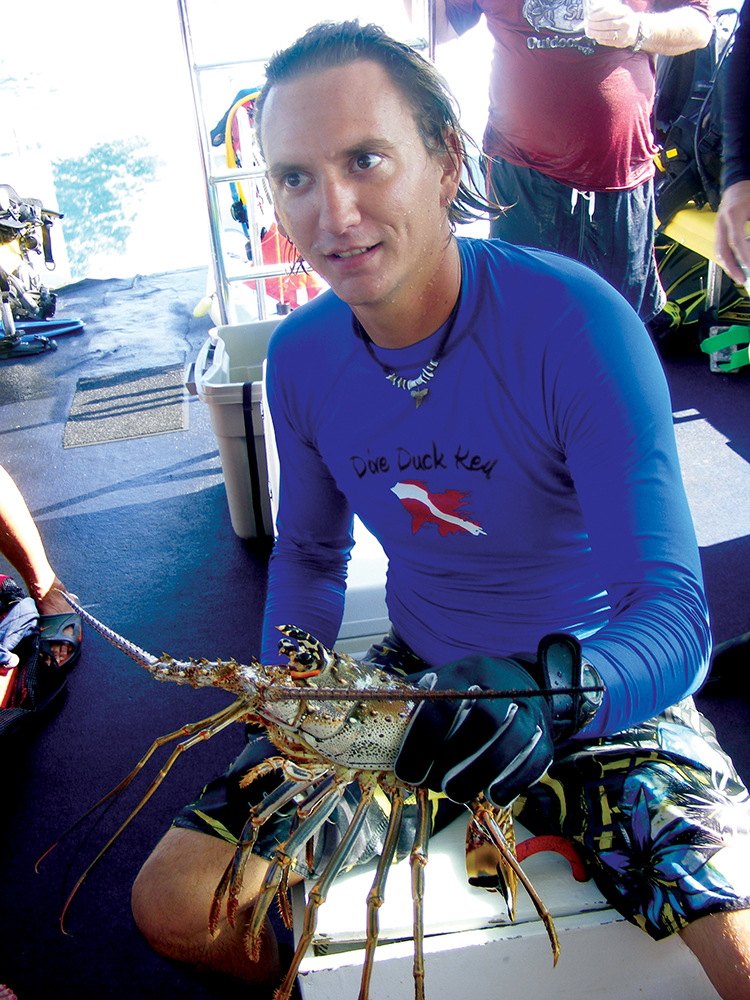 Florida Keys scuba instructor, Brian Slann, shows off a spiny from his dive.

All the ingenious men, and all the scientific men, and all the imaginative men in the world could never invent, if all their wits were boiled into one, anything so curious and so ridiculous as the lobster.
~ Charles Kingsley

From time to time, when the currents are right and the winter is mild, some tropical creatures can be found in the Gulf off the Texas coast. Among these, are Caribbean spiny lobsters, Panulirus argus. Named for the many forward-pointing spines that cover both the body and antennae of this marine invertebrate, spiny lobsters conspicuously lack the large pinching claws of their Maine lobster relatives. Adults range in color from red to brown to blue, marked with occasional dark spots. The tails sport large cream or yellow spots, along with orange-yellow and black stripes on the fan. Their walking legs are striped in blue and have bristly “feet,” while the swimming legs are bright orange and black. They have two pairs of antennae. The first are slender, black or dark brown, and biramous (separated into two branches); they sense movement and detect chemicals in the water. The second pair are longer than the body, whip-like, studded with small forward-pointing spines and setae (bristles), and are sometimes waved to scare off predators. They also have compound eyes that detect orientation, form, light, and color. Although males and females are typically the same length, sexual dimorphism is apparent in the relative size and shape of the tail: the males having somewhat lighter and shorter tails, as well as heavier carapaces.

Caribbean spiny lobsters live in western Atlantic tropical and subtropical waters, ranging along the continental shelf of the southeastern United States from North Carolina to Texas, in Bermuda, throughout the Caribbean Sea, and south to Brazil. Adults are gregarious, migratory, and benthic, most commonly found in coastal and shallow continental waters in coral reefs, rocks, and eelgrass beds to depths of 295 feet. They are relatively selective when choosing a hidey hole and seem to prefer ones that allow complete concealment, exclude large predators, and contain other lobsters.

Since spiny lobsters don’t have large claws to catch prey, they are primarily omnivorous foragers, relying on chemoreceptive setae in the smaller antennae and a complex nervous system to discern the scent of their next meal. They emerge only at night to feed on a wide variety of marine invertebrates and detritus – primarily gastropods, bivalves, and chitons; but also carrion, crustaceans, polychaetes, sea urchins, and occasionally vegetation. In aquariums, they have been observed trying to catch small fishes. The massive mandibles with grinding molar surfaces are adapted for crushing hard-shelled animals or plants.

Many animals (besides humans) prey on this species: sharks, rays, skates, sea turtles, moray eels, octopuses, other crustaceans, snappers, groupers, and even a small whelk which kills lobsters in traps by boring through the carapace. In addition to their heavily armored body, spiny lobsters avoid predation by hiding in crevices during the day. If approached, they can rub one of their plectrum – a nub-like structure found on their antennae – against plates below their eyes. The result is a screeching sound that hopefully repels the predator. If startled, they may flip their tail forward, thrusting them rapidly backwards.

Autumn storms are thought to instigate mass movements of lobsters to deeper water where the effects of those storms are lessened, and water temperatures are more temperate. During migration, individual lobsters line up in a single file called queuing, with each resting its long antennae over the carapace of the one in front. The lobsters have been shown to navigate by an internal magnetic compass using the earth’s geomagnetic field. The return migration in the spring is much more haphazard.

Though adults often inhabit estuaries, bays, and lagoons, spawning typically occurs in nearshore and offshore reef fringes and other hard-bottom areas with low turbidity, low wave action, but with adequate currents for larval transport. The peak spawning period is temperature-dependent but often falls between March and June. Males are strongly attracted to females with ripe ovaries, that are recently molted but hard-shelled. (The female releases pheromones into the water to let nearby males know she is preparing to molt and, thus, mate.) After courtship, during which the male must gently coax the female out of her hidey hole, the male deposits a spermatophore mass (often called a tarspot because it’s a black sticky blob), on the female’s sternum. The mass has an outer protective matrix which hardens and adheres immediately after deposition. Males mate with many females, while the females only mate with one male during a single reproductive episode. When the female judges the time is right, she breaks the spermatophore open and releases her eggs, which pass by the tarspot and are fertilized with the stored sperm. The female then attaches the eggs, anywhere from 5,000 to 500,000 of them, under her tail with a glue-like substance where they will stay for the next three to four weeks. During this time, she is called a berried lobster because the eggs look like tiny berries. She keeps her eggs well aerated and cleaned by pumping her pleopods (swimming legs). Large berried females are less common than small berried females, suggesting that the frequency of broods might decline with age. Since females normally molt before mating, it’s possible that decreased frequency of molting in older females results in a decrease in the frequency of spawning. Eggs are bright orange and darken in color as embryos develop. Embryonic pheromone levels increase when the eggs are ready, triggering vigorous pleopodal pumping and repeated abdominal flexing by the female, helping the eggs to hatch and dispersing the larvae into the water column.

The life history of the spiny lobster consists of four phases: planktonic phyllosome larvae, swimming postlarval pueruli, benthic juvenile, and adult. The phyllosome larva hatch as flat, transparent, spider-looking plankton. They float on currents for a year or more, eventually moving into shallower areas. After 11 molts, at about 1.3 inches, they become swimming pueruli, which are colorless and still lack hard exoskeletons. After several weeks – whenever they encounter suitable inshore substrate, such as mangrove roots or seagrass beds – puerli molt and metamorphose into juvenile lobsters. Young benthic lobsters are cryptically colored in varying shades, and have banding and striping that aid in camouflage. They start off as solitary but soon become more gregarious and migrate offshore where they develop into adults. Throughout their lives, these lobsters will molt to grow larger. Growth in the first year averages 1.5 inches, with growth thereafter averaging approximately 1 inch per year. They molt about 25 times in their first 5 to 7 years of life, and once per year when they’re older. It takes them about 2 years to reach sexual maturity, at about 3 inches in length. They can reach up to 15 pounds / 23 inches, but are more commonly found around 8 inches. Estimated longevity in the wild is between 12 to 20 years.

Spiny lobsters are listed in the IUCN Red List as Data Deficient. There are four stocks: the South Atlantic/Gulf of Mexico stock, and three stocks in the Caribbean—the Puerto Rico, St. Thomas/St. John, and St. Croix stocks. The Gulf stock is not currently listed as overfished, though the population status is unknown. It is managed under the Fishery Management Plan for the Spiny Lobster in the Gulf of Mexico and South Atlantic and also the Florida Fish and Wildlife Conservation Commission Commercial Regulations for Spiny Lobster. The species is commonly harvested, both commercially and recreationally. They are second only to shrimp in commercial importance to Florida fisheries. Items marketed as “lobster tail” are usually from spiny lobster. Minimum spawning size has declined in Florida females, possibly due to intense fishing pressures. In 1922, the minimum spawning size of females was reported to be 3.0 inches. Recent surveys have revealed reproductive females as small as 2.6 inches. Egg production in females has also been shown to be greatly reduced in fished populations, compared to unexploited populations, with females in exploited populations producing only 12 percent of eggs. Restrictions have been placed on fishing for spiny lobsters, mainly to prevent berried females from being caught, and to allow juveniles to grow.

Where I learned about spiny lobsters, and you can too!