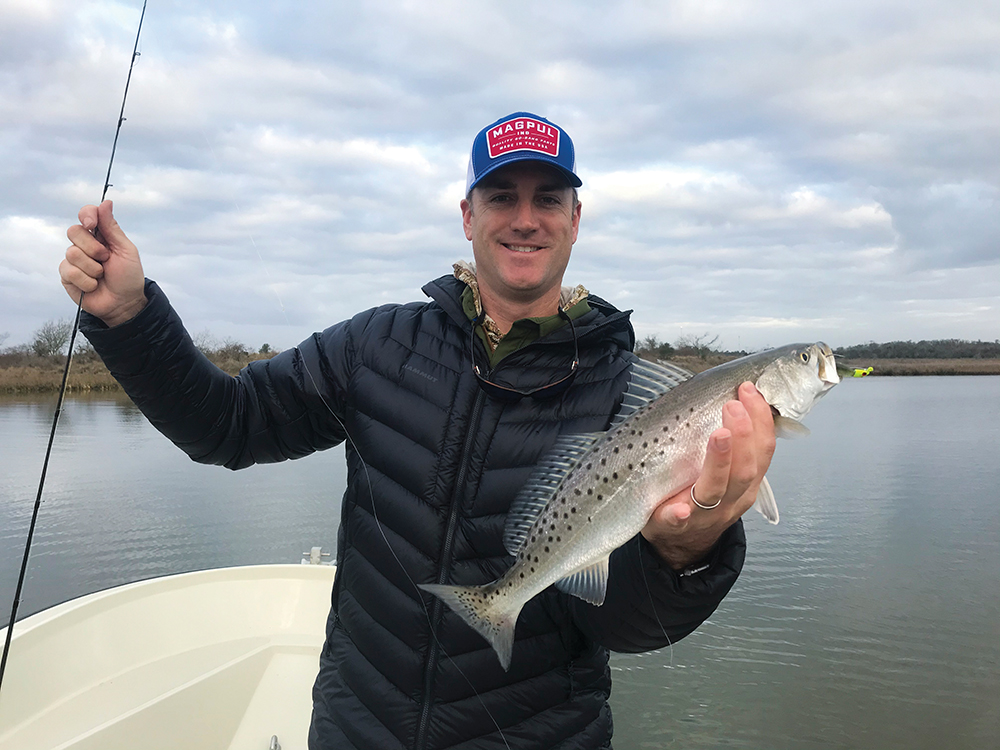 Bart Moore’s wife, Julie, bought him this trip for his birthday and he wasn’t disappointed!

As April approaches we’ll experience warmer water temperatures which will help usher new life into our bays. Post-larval shad will morph into juveniles and eventually form dark clouds just beneath the surface. They will ball-up especially tight when trout and other predators lurk beneath. As our predator fish rise to the surface to feed, tiny glitter-like puffs of shad can be seen showering out of the water and the occasional popping sound from feeding specks will be music to the ears of many.

Small topwaters such as the Heddon Super Spook Jr and Rapala’s SW08 (Baby) Skitter Walks can draw a lot of blow-ups while casting into balls of shad. When topwaters don’t seem to be getting it done, I’ve found two other very effective methods that can draw strikes when a lot of traditional baits underperform. When dealing with tiny forage, trout will often suspend in the water column just below the bait. When they’re ready to feed a little they’ll basically just swim through and vacuum up miniscule shad, glass minnows, etc. without necessarily singling out anything in particular. These fish can be difficult to trick.

One method is to rig a soft plastic on an H & H Flutter Jig. The lead weight (I prefer 1/8 ounce) is on the shank of the hook rather than the nose, which enables the soft plastic bait to remain horizontal as it sinks. With a subtle twitch-twitch-reel presentation this setup will have a more natural swimming appearance and stay in the strike zone of suspended fish, thus resulting in more strikes. A MirrOlure Provoker or a Saltwater Assassin rigged through the split belly works beautifully with this rig.

Another pathway to success for stubborn suspended fish is the use of floating and suspending twitchbaits. If there’s ever a season for my favorite family of lures to shine it’s during spring time. My top three (in no particular order) are MirrOlure’s MirrOdine XL, Borboletta Lele’s, Texas Custom Lure Double Ds and Rapala’s X-Rap Subwalk. The ability of these baits to dance in place makes them irresistible at times. Not only that, but the strikes can be so violent that it adds a whole new element to the level of excitement.

In addition to shad, brown shrimp will begin their migration from back lakes, bayous and rivers and continue their weeks-long journey toward passes leading to the Gulf of Mexico. Gulls and terns will hover over shrimp as trout and redfish drive them to the surface. Tiny atomic bombs will sound off as mainly small trout violently attack the shrimp as they propel themselves backwards with each lightning-fast flick of their tails.

Warmer temperatures and more signs of jubilant life will lend to more anglers on the water as folks get the itch. Many guides will begin their so-called busy season. While we’re all looking forward to some fun-filled days on the bays there are some things we can all do to help ensure that our speckled trout not only maintain sustainable levels but maybe even help increase future numbers of Texas’ most targeted species. Such responsible practices are even more needed coming off of one of the worst freezes we’ve experienced since 1989.

Some parts of the Texas Coast experienced higher mortality rates than others but the freeze fortunately left us with manageable numbers of live trout, redfish and other species in virtually all bay systems. At this time it is impossible to quantify as it will take weeks if not months of anecdotal evidence from our on-the-water experiences as well as Texas Parks and Wildlife Coastal Fisheries findings and gill net surveys to give us an idea.  In the meantime, this should be a wakeup call for all of us.

Practicing careful catch and release will not only help to more quickly replenish trout in the hard hit areas but it can enhance the numbers and size of trout in areas that weren’t as severely impacted. It’s a great thing to practice no matter how you look at it.

In the past two days my clients and I released approximately forty trout along with numerous reds and flounder. Most of the trout were in the two to three year age class. Even if only half of those trout were females (more likely that 75-80% were female) their spawning potential could be calculated at a minimum of 2,000,000 eggs (20 x 100,000) and that’s just from one spawning event. Most of these trout were in the 2 to 3.5 pound range and could possibly spawn around 300,000 eggs each. In addition, trout don’t just spawn once but many times over the course of the year (mainly between the months of April and October here on the Upper Texas Coast). Of course, only a small percentage of eggs ultimately survive but, again, I’m using very conservative numbers.

There are some simple guidelines to use when targeting trout that you plan to put back into the system. The first thing I like to do is use needle nose pliers to crimp down the barbs on the jig heads we’re using. This makes for a quick and easy release and does very minimal damage to the fish. In many cases we don’t even need to touch the fish to remove the jig. If we do have to grab the fish then we will wet our hands first. Avoid using a towel or rag as removing their protective slim (mucous) layer can lead to infection and other issues. We also try to avoid beating on schools of trout especially ones that are mainly undersized. If we’re on a school that’s more than half throwbacks then it’s time to relocate.

One thing that I’ve been hearing from a few other fishermen lately is that “Mother Nature controls everything and she will take care of our fishery.”  There may have been a time some decades ago when I could’ve possibly been inclined to agree with such a simple blanket statement. However, the natural and man-induced changes that have taken place through the years seem to have culminated into a perfect storm. This coupled with the fact that there are many stakeholders (Fishing guides, recreational anglers, shrimpers, oystermen, crabbers, drum liners, etc.) continuously putting added pressure on the resource tells me that conservation efforts on all fronts should be an ongoing process.

I also personally think there needs to be (and should’ve been done a long time ago) a moratorium placed on captain’s (fishing guide) licenses. This was done years ago with commercial shrimp and oyster licenses. Many guides are just as much (if not more) commercial fishermen as those who drag nets and dredges.

I believe Atlantic croaker should have a 10-inch minimum length in an effort to help rebuild the croaker fishery that has diminished through the years. In addition, there are speckled trout removed (that would’ve otherwise remained) from the system every year by fishermen using live croaker for bait. Even some of the live croaker guides have told me this.

When addressing frequently asked questions leading up to speckled trout scoping meetings in 2011, the Texas Parks and Wildlife Department was asked the following question: “Are croakers an effective bait for trout?”  Their answer: “Yes, but not for everyone. On average, guided trips using live croakers catch trout at about twice the rate of other baits, but private fishing trips using live croakers catch trout at the same rate as other baits.  Croakers are especially effective at catching trout between 16” and 24” compared to other baits.” (Scoping: Spotted Seatrout Conservation Measures, tpwd.texas.gov)

I know that this article may ruffle some feathers with those who think that “Well, by God, I’m entitled to my limit of fish because that’s what the law allows.” While I understand to an extent that mentality, I encourage everyone to put their thinking caps on and try to understand where our fishery is right now. A conscientious understanding of our fishery and what makes it tick will lead us down the right path. Practicing good stewardship can only improve our fishery. Why wouldn’t we want to try to make it the best it can be?

Reds Under Birds in April