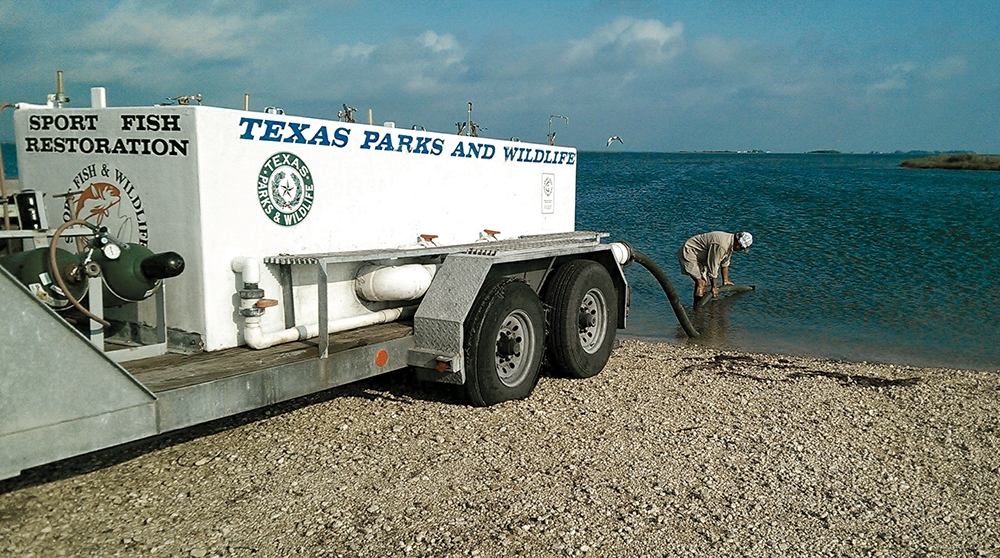 The Coastal Fisheries Division of the Texas Parks and Wildlife Department (TPWD) is tasked with protecting, managing, and ensuring the long-term sustainability of Texas' coastal ecosystems marine resources.  That is accomplished through, but not limited to, adjusting regulations, conducting a long-term fishery monitoring program, ensuring habitat protection, building artificial reefs, ensuring adequate freshwater inflows, and carrying out a stock enhancement program.  Texas has four million acres of saltwater, including the bays and estuaries, and nine nautical miles into the Gulf of Mexico.  These fisheries management tools are all used in conjunction to manage the state’s coastal resources.

The purpose of stock enhancement is to release hatchery-reared juvenile fish into the wild to augment the natural supply of juveniles and to help optimize fishery harvests.  Stock enhancement has been utilized in the United States for over 100 years and is used by fisheries managers to sustain healthy populations.  When used together with more traditional fisheries management tools (e.g., fishing regulations, law enforcement, fisheries independent & dependent monitoring programs), stock enhancement can supplement declining fish stocks.

The release of hatchery-reared fish can be an effective tool for supporting declining stocks of native fishes.  In natural systems, such as coastal bays and estuaries, the mortality of larval fish is very high.  Hatchery-reared fish can successfully survive the dangerous developmental stage in an aquaculture environment, allowing for a greater chance of survival once released into the wild.  This process involves culturing larvae in indoor tanks and rearing juvenile fish in outdoor saltwater ponds before releasing them into Texas coastal waters.  Also, by supplementing wild populations with hatchery fish, fisheries can be supported during periods of decreased larval survival from harmful algal blooms, severe weather events like the February 2021 freeze, or other environmental disturbances.

By operating three hatcheries along the Texas coast, TPWD can stock each bay system in Texas with hatchery-reared fishes spawned by captive broodfish collected from the upper, central, and lower coast regions.  Annually, around 20-30 million Red Drum and Spotted Seatrout fingerlings (1.5 inch long juvenile fish) are released into Texas coastal waters.  Historically, the hatcheries' focus was Red Drum production, with over 787 million fingerlings released to date.  Through successful management, the Red Drum fishery has made a dramatic recovery, with record high population numbers being recorded in recent years.

Today, the focus of Texas saltwater hatcheries has shifted to Spotted Seatrout and Southern Flounder production.  Spotted Seatrout are one of the most popular game fish in Texas and along the Gulf Coast.  The National Oceanic and Atmospheric Administration (NOAA) reports that the total annual catch of Spotted Seatrout (harvested and released) has averaged over 50 million fish each year from 2009 to 2018 in the Gulf of Mexico.  Spotted Seatrout populations are also susceptible to environmental disturbances such as extreme cold weather and red tide episodes.  As such, the Spotted Seatrout is a great candidate for stock enhancement in Texas.

The Southern Flounder is another highly prized fish for both food and recreation. Southern Flounder populations in Texas have been decreasing over the past 30 years, resulting in fishing regulation changes and the initiation of a stocking program.  Early life stages of Southern Flounder can tolerate colder winters than species such as Spotted Seatrout, however, young flounder are more sensitive to warm weather conditions.  Hatchery production of these fishes in controlled environments can help improve poor larval survival rates during colder or warmer than usual winters.

Stock enhancement hatcheries are a useful fisheries management tool and have a record of success in Texas.  The release of hatchery-reared juveniles into wild populations helps augment the natural supply of juveniles to rebuild overfished populations and supplement weak year classes of fish by overcoming recruitment limitations.  The February 2021 freeze was one for the record books.  Prolonged freezing temperatures caused fish kills along the Texas coast, affecting many different species, including notable game fishes such as Red Drum and Spotted Seatrout.  Luckily, Texas operates three coastal fish hatcheries that raise and release Red Drum and Spotted Seatrout fingerlings.  These TPWD fish hatcheries are actively involved in helping jumpstart the recovery process of Red Drum and Spotted Seatrout populations along the Texas coast.  The hatcheries serve as a powerful fisheries management tool for all seasons.