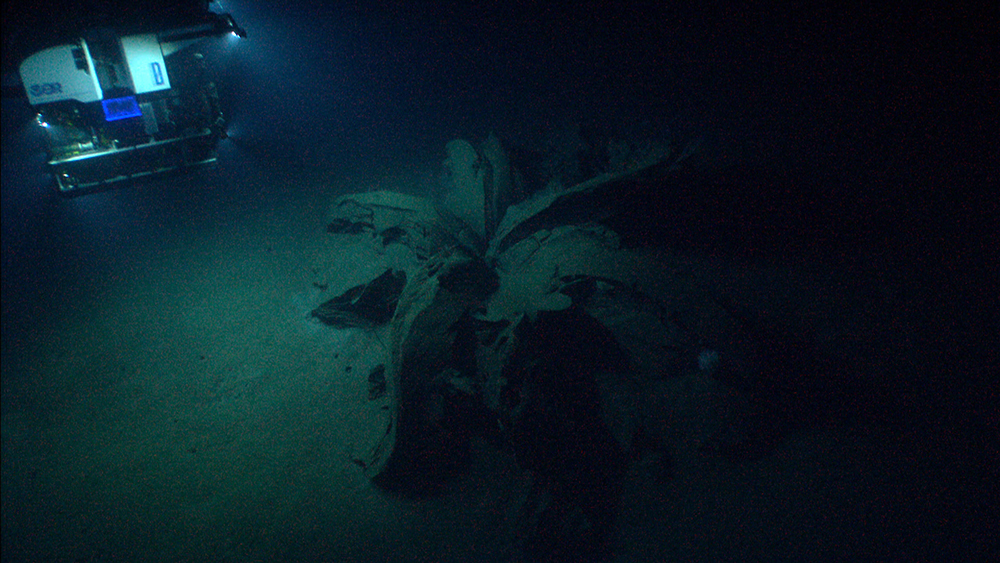 ROV Deep Discoverer approaches the first tar lily. Image courtesy of the NOAA Office of Ocean Exploration and Research, Exploration of the Gulf of Mexico 2014.

If you’ve never heard of a tar lily, you’re not alone. Few have been discovered in our oceans, but two of them reside 175 miles off the Galveston coast in the Gulf of Mexico. In 2014, NOAA scientists searching for shipwreck remains with a submersible vehicle found something unexpected instead – the remains of two dormant asphalt volcanoes. The extrusions formed the shape of lilies, and thus were dubbed “tar lilies.” They were found over a mile beneath the surface, north of the Sigsbee Escarpment, a feature that separates the dimpled depths of the northern Gulf of Mexico from the flat abyssal plain to the south. The thick, deeply buried salt deposits in the northern Gulf that cause the unusual dome and basin pattern play a critical role in the seepage of natural gas, oil, brines, muds, and asphalt from the seafloor.

To understand how these tar lilies formed, we should start with some context. In geologic terms, asphalt, or bitumen, is a naturally occurring, viscous, semi-solid form of petroleum, distinct from the refined asphalt mix used in roads. It comes from crude oil, and can be separated from other crude oil components – such as diesel and gasoline – by vacuum distillation (a type of distillation performed under reduced pressure that separates compounds based on differences in their boiling points). Tar looks similar to asphalt, but is extracted from coal, rather than crude oil. Colloquially, these terms are used interchangeably though, hence “tar” lilies – also, the “tar” sand deposits in Canada, which do not come from coal. Geologically speaking, the term asphalt is used interchangeably with bitumen. But to reduce confusion, geologists around the world often use bitumen to refer to naturally occurring material, and asphalt to refer to the refined mix.

Bitumen deposits occur naturally throughout the world. One well-known deposit is the La Brea Tar Pits in California, where many prehistoric animals met their end, but significant deposits are also found in Trinidad’s Pitch Lake, the Dead Sea, Venezuela, Switzerland, and northeastern Alberta, Canada. The chemical composition and consistency of these deposits vary significantly. In some places, bitumen exudes naturally from the ground; in others, it congeals as liquid pools, which can harden into mounds; and in some, it oozes from underwater seeps, washing up as tarballs along water’s edge (in Santa Barbara, CA, for instance). Through history, bitumen has had many uses: sealant, adhesive, building mortar, incense, and decorative pigment and texture. It was also commonly used in waterproofing canoes and such, and even in the mummification process of ancient Egypt.

Though glowing streams of molten rock are what most people think of when they hear the word ‘volcano,’ eruptions of mud, shale, and salt can also form volcanoes. As a major petroleum basin, the northern Gulf of Mexico is underlain by large deposits of oil and natural gas, so a petroleum volcano isn’t a far-fetched notion at all. Asphalt volcanoes are a type of seamount (a submarine volcanic mountain) first discovered in 2003 by a research expedition in the southern Gulf of Mexico. They are located on a seafloor hill named Chapopote, which is in a field of salt domes known as the Campeche Knolls, a series of steep hills formed from salt bodies that rise from underlying rock. The research team documented flows as wide as 66 feet across and similar in structure to the distinctive aa and pahoehoe types of basalt lava flow seen in Hawaii. Alongside the asphalt were areas soaked with petroleum and methane hydrate, also spewed from the volcano, an attractive environment for chemosynthetic bacteria and tubeworms, Since then, more asphalt seamounts have been found, both along the coast of the US and Mexico, and in other regions of the world. Some are even still active.

In 2004, scientists on the German ship F/V SONNE reported asphalt volcanoes nearly 2 miles deep in the southern Gulf of Mexico. Later reports confirmed similar asphalt volcanoes off the coast of California and West Africa. In 2007, seven more seamounts were discovered off the coast of Santa Barbara, California. The largest lies at a depth of 700 feet. The seamounts were larger than a football field and about as tall as a six-story building, all made completely out of asphalt. In 2017, NOAA’s Deep Discoverer (D2) remotely operated vehicle (ROV) found an asphalt seep at ~3,775 feet deep in an area known as Henderson Ridge. However, none of these discoveries showed the distinctive tar lily phenomena of the 2014 expedition.

Aboard the Okeanos Explorer, the NOAA team mapped the seafloor with sonar, sending down the D2, along with the Seiros camera platform, to check out anything interesting. Some of those things end up being shipwrecks, but there were also natural features – such as cold seeps, brine pools, mud volcanoes, etc. – which provided clues that marine scientists, as well as drillers, might find interesting. During Dive 12, sidescan sonar showed a cluster of large structures just over a mile deep. NOAA explorers steered the D2 to the bottom, thinking that they were approaching the wreck of a sunken ship. The team knew that three sunken vessels already lay off the Galveston coast, and that artifacts from those wrecks – including anchors and jars of ginger (possibly used to treat seasickness) – had already been collected. While approaching the predicted wreck, the D2 passed over a flat, sedimented seafloor with scattered black bacterial mats, a number of unbranched bamboo corals and holothurians, sea pens, shrimp, polychaetes and one wooden log, heavily infested with squat lobsters.

The archeologists watching the dive footage were ready to note the shape of the hull and look for telltale debris. Instead, the D2’s cameras revealed massive blackened rocks splayed out over the seabed in the shape of an enormous flower, 20 feet wide and 10 feet high. Within minutes of observing the first part of the suspected shipwreck, it became clear that the feature was not man-made, but a natural phenomenon – also that they weren’t rocks. Parts were rounded like they had been squeezed out of a tube, and dozens of cracks and fissures revealed a smooth black substance. Discussion between the shore and the ship convened on the likeliest explanation – a much unexpected example of an asphalt volcano. But rather than a sticky mess, the thick petroleum flows had built elegant flower-like forms, the first of its kind documented in this area of the Gulf of Mexico. Each ‘petal’ of the extrusion was curved and layered, a result of the hot asphalt’s contact with frigid seawater.

The asphalt in these volcanoes is produced by the same geologic processes that form oil and gas. There are many oil platforms in the Gulf that drill into reservoirs of oil and gas. Some of these reservoirs are so old that the oil they contain has been ‘cooked’ for millions of years. Heating causes the volatile components to evaporate, leaving behind a thick, tarry remnant – like what would be left behind if you dissolved grease in gasoline, then all the gasoline evaporated. In refineries, the residue is mixed with sand and lighter oil, then heated to make it flexible enough to pave roads. In deep-sea asphalt volcanos, the residue is squeezed out in huge ropey masses that bend and flow, or splay into lilies in rare cases. When the asphalt cools to the point that it cannot flow anymore, cracks and fractures form. The hard petals become islands of life for animals that need hard surfaces. Sitting in the middle of the ocean floor, surrounded by heavy sediment, the tar lily attracts colonizing sea life, since creatures have something they can attach to or sit on, an impossibility in the deep sediment surrounding the lily. The first tar lily was colonized by fly trap anemones, unidentified sponges, goose neck barnacles, octocorals, sea pens, squat lobsters, and bamboo corals. There were also a few chemosynthetic creatures, including tube worms, bacterial mats, and Alvinocaris shrimp. Bacteria that can utilize petroleum and methane hydrate (another substance extruded by asphalt volcanos) as food generate a sulfur-based food chain for chemosynthetic tube worms and mats of other sulfur-oxidizing bacteria. At the second tar lily, there were more chemosynthetic worms, a spiral coral, a few octocorals, and several branching bamboo corals.

Though these tar lilies are hundreds to thousands of years old, and they appear to be dormant for the moment, the size of the extrusions suggests that there may be more asphalt below that might get squeezed out in the future. Additionally, they’ve shed more light on asphalt volcanoes, and the mysteries of our leaky petroleum basin, in general. With three well-documented examples in the Gulf, and others off Africa and California, seafloor asphalt can be classified as its own niche habitat. Another world, right beneath our boats.

Where I learned about tar lilies, and you can too!