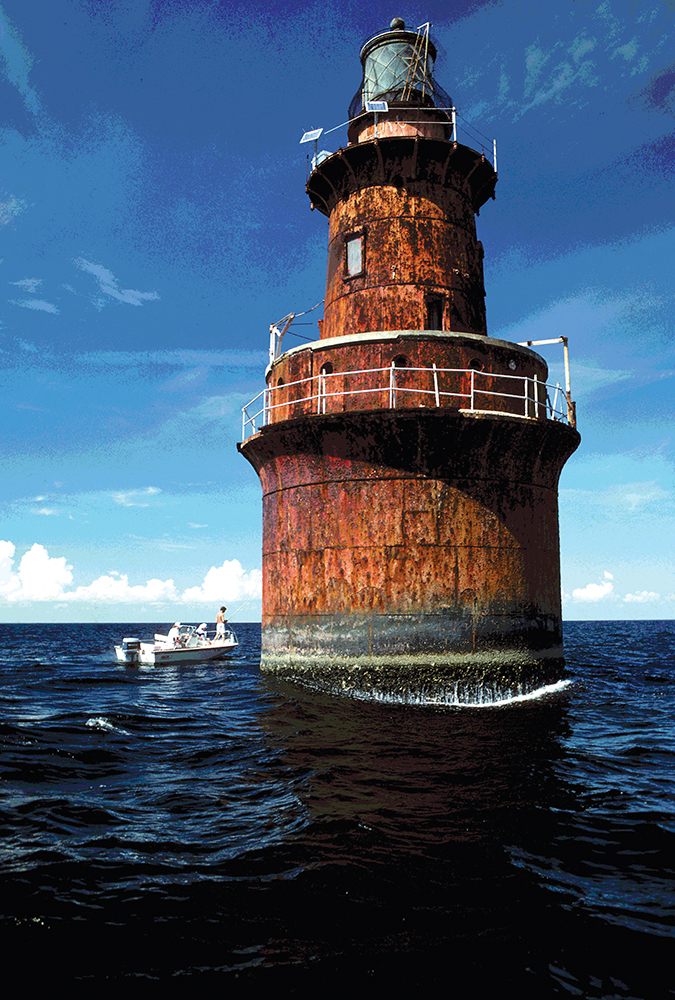 Classic shot of the 18-mile light in the late 1980s, easily reached without even a compass. That distant line of clouds marks the beach during summer.

A recent visit to Sabine Pass brought back a host of memories of fishing the “18 mile light” (house) that, for almost a century, sat 15 miles off Sabine Pass, far enough offshore to attract a variety of fish. Some 72 feet high, it was almost within sight of the local jetties, and a must-stop back then before so many production platforms stood off the coast.

Built in 1904 and lit two years later, the ling that gathered there must have turned the water brown in early summer. In our youthful days we encountered big brown patches of ling, easily 50 fish on the surface, all weighing from 30 to 50 pounds, less than three miles from the Light. So many, it didn’t matter if you lost one; they were greedy. They busted up our tackle and sometimes our boat’s interior. After an exhausting battle, when finally brought alongside, we beat on them with a Louisville Slugger bat like the rookies we were. In the following years, we learned that, when close to the boat, a head-shot with a .22 rifle would keep them nice and quiet in the fish box.

We also caught nice trout out there, because there was (and perhaps still is) an offshore tribe of these fish that hangs around offshore structure, up against the Light and also inside nearby platforms. Sometimes those trout were hungry enough to eat cut bluefish chunks on circle hooks, but that was rare. Mostly they preferred a white, one-ounce hair jig, what we call today a striper jig. Or we used our standard ¾-ounce gold spoons. If you could climb a rig and doodle-sock a jig near bottom, that was the surest ticket to sticking a three-pound offshore trout. Sometimes it was calm enough to tie our small boats inside the platforms, which made it easier. Fishing in the shade with trout beneath the boat. A local friend, Bud Reynolds, had a 14-foot stick-steering bassboat like my own, and we’d run both boats together out there all day, often returning at dusk. Home wasn’t far, traffic was nil by today’s standards, and next day we’d do it again.

One summer day we were anchored against the Light itself, gently bumping against it, though the Gulf was glassy calm, and had two solid hours of action with sizeable trout.  We used home-tied feather jigs, after coloring the white feathers from an unlucky cattle egret with pink Rit dye. We cranked up one trout that was so big, we considered gaffing it, since we never carried a landing net. Our dilemma was solved when the ponderous trout shook off the jig at boatside, and swam back down in dark, clear olive-green water, always our favorite. If the Light carried that kind of water, action was imminent.

Those trout are likely still out there today, though perhaps not at the Light, which now sits in a kid’s park in Sabine Pass. Which is…a little bogus and sad for anglers who knew the Light well during its heyday offshore, hosting an acre of big ladyfish, bluefish, trout, ling, and ravenous Spanish mackerel. Out there, a gold spoon without a leader might not survive the first cast and retrieve. We always used red Ambassador reels filled with hard, 20-pound Ande line, and fought fish until we’d just had enough. Even the ladyfish were tough out there; at one point I suggested that my brother not pull so hard on those fish while they were jumping. Sure enough, his jig flew back in the boat, hitting him in the mouth.

I always wanted to spend the night out there, but figured it for a lonely, dark spot without benefit of steady overhead lighting. We could have fished until midnight and run back to Sabine but never did, preferring to stay put after dark so we wouldn’t run over some floating object. I did talk to one guy from Bridge City who spent the night at the Light, fishing for sharks, using whole bluefish for bait. Somehow he caught a tarpon that weighed 120 pounds. I took pictures of his prize on the tailgate of his pickup truck in Bridge City.

A Port Arthur doctor told me they fished the Light at night in the 1960s, and caught trout up to 12 pounds. That sounds huge today, but during that decade, trout of that size were not uncommon in Baffin Bay. Today they are scarce as hen’s teeth.  Back then they threw SeaHawk plugs, which are today’s Gotcha lures. Each is a stick plug with built-in lead that sinks very fast. Casting in 20 or 30 foot depths, you don’t want to waste time waiting for a lure to go deep where the fish are. The shallowest bottom at the Light was 18 feet deep, with occasional bottom snags that looked like old girders. Shallow enough to snorkel down and see a few snapper, on a calm day.

Located at 29.28 North and 93.43 West, the Light was built on the very peak of the Sabine Bank, flashing away in case a ship even today wanders out of the deeper Sabine channel, which is carved through the bank only two miles east. West of there over the horizon, the next shallow area off the Texas coast is the similar Heald Bank off Galveston.

Taken down in 2002 and replaced with a modern, slim beacon, the structure still attracts fish on occasion; it has the same broad base below water that really makes a break in the current, but is far less interesting, visually. Water quality is what seems to matter most; stop by and if the water is lame (brown), keep going. If there is no current, keep going. The best currents should be around the new moon and full moon weeks, but there is no way to predict water clarity. If conditions look good, drift and make a few casts, letting those jigs and spoons settle deep before retrieving. On the surface, watch for ling or feeding mackerel.

In more recent years, late summers have found black water off Sabine, known as the “dead zone,” caused by low-oxygen fresh water from the Mississippi River that flows west along the beach, reaching Sabine Pass before receding each autumn. Compliments of every state on that river’s huge watershed. The problem is excess nutrient water pollution that eats up the oxygen until there is little or none left. You won’t find many fish in those conditions. August now seems to be the worst month for water quality in that area off Sabine. If offshore water there is blackish with occasional water hyacinth, move on to greener water either inshore or offshore.