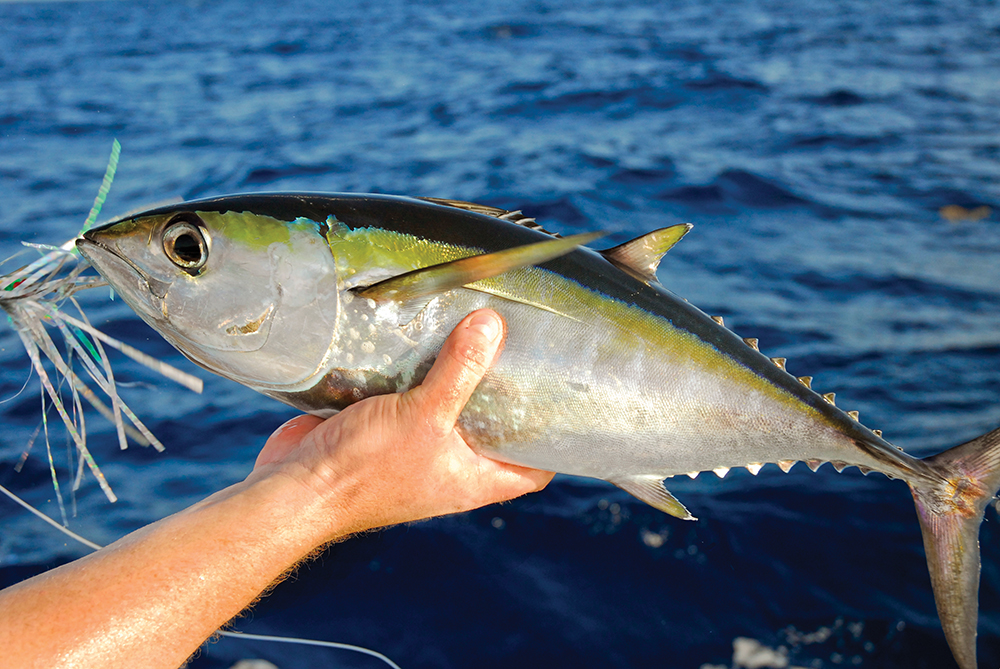 Blackfin tuna are built for speed, and have big eyes for their size.

Not many Texas anglers get far offshore during winter, but catch a “weather window” between cold fronts, and the weather out there is pleasant enough, even when temps are cold back on the beach. No jackets required way offshore where lots of fish gather ‘round deepwater platforms, some anchored in mile-deep water. The most dependable action is blackfin tuna up to 30 pounds, real speedsters that will put a strain on kingfish tackle. Catch a few of those “super-sized bonito” and you’re ready for a break.

Due to their isolation offshore, and sometimes weeks of windy weather, the Texas blackfin tuna population seems to be doing okay, and we still have no daily bag limit. That’s changed in Florida, where they recently passed a 2-fish bag limit and a 10-fish boat limit. It seems that Florida’s massive fishing fleet, nice weather, and the fact their tuna can be caught within sight of land, even a few hundred yards from their Atlantic jetties, makes them too susceptible to fishing pressure.

In Texas, blackfin tuna stay much further offshore, schooling around the remaining deepwater rigs. I’ve actually jumped overboard in February with a camera out there, and was amazed how many blackfin tuna were visible. It looked like thousands below me for at least a hundred feet, clouds of them in that warm, clear blue water; there were so many, they looked like minnows. Except they weren’t, they were hard-fighting tuna.

Blackfins aren’t as picky or unpredictable as their bigger cousins, the yellowfin. Both species are caught day or night, so making an overnight trip means lots of fishing time. Trolling a dive plug works during the day, along with almost any skirted lure, as long as it isn’t too big. Pulling Rapala plugs is fun, but digging big treble hooks out of a hard-mouth tuna…not so much. Small, shiny skirts and single hooks are more efficient. Blackfins have big eyes, designed so they can feed at night or down deep in subdued lighting. Those eyes are helpful when chasing prey, or avoiding big predators like marlin, that eat them like candy if they can be chased down.

At night, we simply tied up to the rig and tossed out frozen, weightless cigar minnows, like we were “kingfishing.” The lights on those big, deepwater platforms are bright and attract all sorts of squid and flyingfish at night, and you can see and hear splashing going on up to a hundred yards away, tuna busting the surface. It’s possible to catch them on topwater plugs, too, which is always a blast. You’d need a sizeable spin outfit for that, to make the long casts and avoid a baitcasting reel’s untimely, disastrous backlash just when a tuna hits. Catching tuna on topwater tuna poppers—that’s the ticket for serious fun.

On the big partyboats that venture further offshore, casting isn’t encouraged with dozens of people on deck. They prefer the 6- to 8-ounce metal jigs (Halco makes a favorite) that can be lowered straight down and jigged vigorously back to the surface. If the current is strong and the tuna deep, that’s the ticket. A longer, stout rod of eight feet is better for jigging (making longer sweeps of the rod tip), instead of short pool cue partyboat rods, so consider bringing a variety of tackle.

As for safety, the big catamaran partyboats can reach those deepwater tuna rigs without worrying much about wave chops. You can nap in dry comfort during the run, instead of a beanbag chair on the back of a big center console boat, with two or three howling outboard engines sometimes only feet away. (Don’t forget the earplugs.) Center consoles may get offshore quicker in the right conditions, but they sometimes get caught in choppy seas. Our worst trip was an overnighter in a 26- foot center console in May; the tuna bite was fast and furious after sunset and we caught a dozen, until an unexpected norther with lots of lightning  heralded a grim night and an end to our fishing.

What followed was a restless, lightning-filled night, not something I would care to repeat. Seas next morning appeared to be 12-14 feet high; we were definitely looking up at them. And what fun, dancing on a rail-less bow pulpit while unhooking from a steel oil rig in huge seas. Luckily by sunrise the wind had shifted to the south and we literally surfed our way back to Freeport. At one point we slid down a wave, hitting the trough sideways, where the boat stopped cold. Two of us, including the driver, were flung to the deck. A third guy grabbed the wheel and quickly got us moving down-seas, before the other two could get back on their feet.

Galveston’s tuna-seeking partyboats made a number of trips last December, after catching some fortunate weather windows when the Gulf was pleasant enough, and pretty much slayed both yellowfin and blackfin tuna; hundreds of both species were caught. Galveston’s New Bucaneer website shows multiple scheduled trips targeting tuna planned for March, April and May this year, listing also the phase of the moon for each trip. These modern catamaran boats, up to 100 feet long, are faster and don’t roll in the waves like the old, single-hull boats that used to lumber us out to the snapper banks.

As far as phase of the moon, many assume that a dark night works better for tuna; the only lights are provided by the Gulf platform and the boat itself, which concentrates baitfish and tuna more closely. On a full or moonlit night, those fish can be spread out too far from the boat to reach.

One angler who made a tuna trip in December is Ava Lewis from the Port Arthur area, who fished on the Captain John, a 75-foot catamaran partyboat also based in Galveston. A first-timer on partyboats, she and her friends did some research on YouTube and either stocked up or borrowed necessary tackle. The tuna were fun, all were caught on big diamond jigs lowered deep. Barracuda were a problem, sometimes just eating the tuna’s tail but sometimes only leaving a head. Several bonus yellow tuna were caught. They stopped at Stetson Rock on the way back to port, catching snapper and bottom fish as a bonus. A cold front arrived while they were still out there, head-on seas with wind of 15-27 knots, but she slept during the ride back, it was easy. They came home fired up ready to go again.

Like many fish, blackfin tuna are better on the table after being bled. Not sure how that can be accomplished on a high-deck partyboat, except by lowering a bucket on a rope or using the boat’s wash-down hose to fill a bucket. Cut a gill on the tuna and dunk him head-down into the bucket, until he quits wiggling. However, if you dump the bucket, it might attract sharks. Perhaps a trash can be filled with water that can be used for hours until the boat moves. Tuna also taste better when quickly gutted and the body cavity packed with ice. Slamming these fish on deck or hoisting them in the sun for pictures obviously won’t improve their flavor. While cleaning, be sure to trim away the darkest meat. They’re best when eaten fresh, instead of frozen. And be sure not to eat too much; almost all tuna carry varying amounts of mercury. If you make a big catch, it’s best to spread them around with other people, instead of freezing and trying to consume many pounds of fillets. For consumption’s sake and maintaining the tuna population, it sounds like adopting a daily bag limit similar to Florida’s would be practical.

Here are 10 recipes for cooking blackfin tuna:
shorturl.at/efRV5
and
https://forums.floridasportsman.com/discussion/9054/black-fin-tuna-recipes