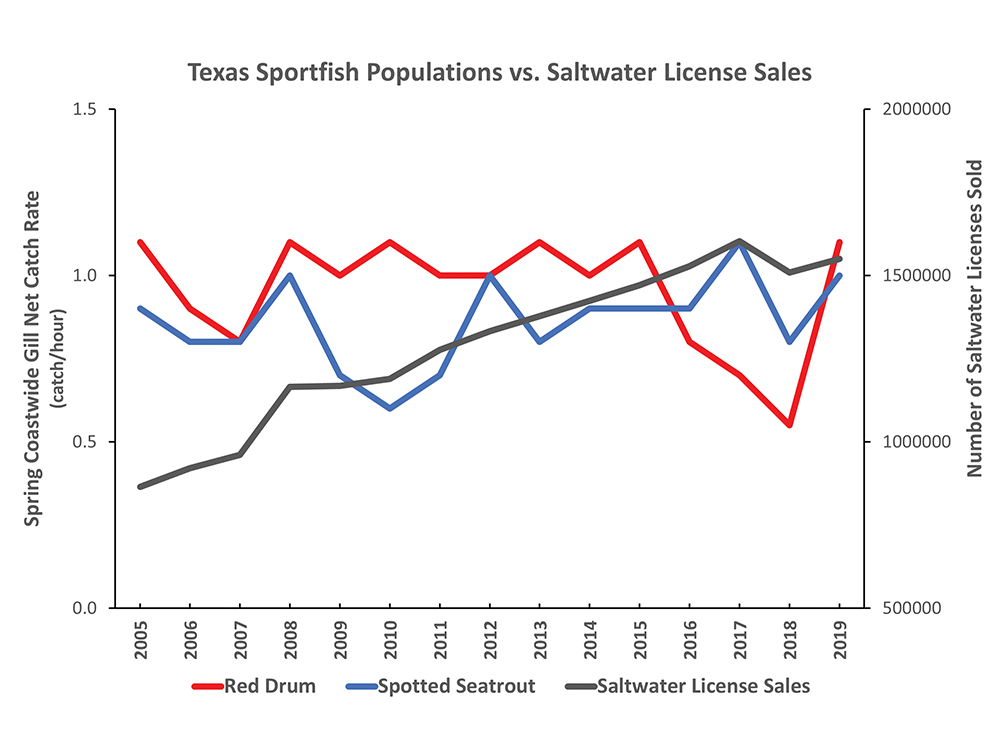 It is no secret that the freeze of 2021 was a historic meteorological event, impacting the lives of every Texan. Texas’ wildlife was also impacted, particularly its coastal fisheries. As outlined by the Texas Parks and Wildlife Department’s (TPWD) article in this publication last month, it will take time to fully understand the magnitude of the recent damage to our sportfisheries. This freeze was a natural, albeit extreme, event that our sportfish populations have evolved to withstand. However, sportfish population’s inherent capacity for recovery in the wake of deleterious natural events does not account for the additional pressures related to recreational harvest.

During normal years, Texas’ sportfish populations continue to flourish due to good management and wise recreational angling practices. There are many examples of this, such as spotted seatrout and red drum, whose populations have remained stable despite increasing recreational fishing activity within the state. However, from a fisheries perspective, this is not shaping up to be a normal year. As mentioned in TPWD’s article in last month’s issue, many of Texas’ sportfish populations have exhibited declines after previous freeze events. Given the severity of the 2021 freeze, managers, researchers, and anglers alike must wait to see how much work is truly ahead of us.

So where does that leave us this fishing season? It leaves us with each of you.

The simple truth is that the recovery speed of Texas’ sportfish populations will come down to decisions made by individual anglers. There is nothing wrong with keeping a few fish for dinner, but this is probably not a great year for an all-out meat haul.

Let’s be clear, you should go fishing every chance you get. A few of us rely on fishing to earn a living. A lot of us depend on fishing to spend time with friends and escape the stresses of daily life. All of us want access to healthy and abundant sportfish populations.

As we look forward to a summer on the water, it is important to consider the benefits that catch and release fishing techniques can offer sportfisheries recovering from the freeze. First off, there is a stigma regarding catch and release angling that needs to be broken. Catch and release is not an elitist sport or something only to be applied when flyfishing tarpon off expensive poling skiffs. To put this into perspective even further, every law-abiding angler is practicing catch and release on some level already. Anytime you release an undersized fish, or a fish that would put you over a limit, you have joined the ranks of catch and release anglers across the state.

But simply throwing a fish back in the water is not a guarantee it will survive. Variables like water temperature, fight time, hooking location, and handling methods all play a role in whether a fish survives after release. Some fish may swim off looking healthy and strong, only to die hours or even days later. In the research world, we refer to this as “post-release mortality” and it is rapidly becoming one of the most important factors when assessing fishing pressure and harvest levels.

The good news is that incorporating just a few simple tricks into your fish release routine can drastically increase “post-release survival”. Across the board, the most important thing anglers can do to ensure a successful release is to minimize handling stress. The simplest way to do this is by incorporating a lipping tool into your everyday fishing gear. Lipping tools come in all shapes and sizes and there is a plethora of misinformation surrounding their use (although certain sensitive species like bonefish are susceptible to injury). Here at the Sportfish Center, we routinely use lipping tools when handling fish for our research. Over the years, we have observed extremely high long term post-release survival rates for spotted seatrout, red drum, common snook, black drum, and red snapper when lipping tools are properly used during the handling process. We prefer to use Boga-Grips as they are well made, have accurate scales, and incorporate swiveling heads. This last feature is extremely important as it protects the fish’s jaw from additional strain as it rolls or twists. There are plenty of good cheap alternatives to Boga-Grips but look for a model with a swiveling head.

Other important release techniques can be conducted faster and more efficiently when using a lipping tool as well. They allow for easy restraint of a fish during hook removal without the need to physically grip the fish with your hand. It astounds me how many conservation-minded anglers will grab a fish by the gills when removing a hook (I’m guilty of this from time to time - one of those people who live in glass houses kind of things). In addition to protecting the gills, minimizing physical touch also protects the animal’s slime coat. This thin layer of mucous serves numerous functions crucial to a fish’s health. It protects the fish against pathogens, as well as making it more hydrodynamic, which is important for securing prey and evading predators. It may sound silly but damaging a fish’s slime coat can actually kill it rather quickly.

Lipping tools also allow the fish to be restrained while still in the water. Leaving a fish in the water is important as it supports the animal’s body weight. Fish anatomy has evolved in the relative “weightlessness” of water. Lifting a fish out of the water for extended periods, especially vertically, can cause extensive damage to the animal’s internal organs and bone structure. Holding a fish vertically to get a quick weight is usually OK, but if you have to remove a fish from the water try to hold it horizontally and support its body as much as possible.

Providing fish with oxygen after a fight is extremely important, so being able to leave them in the water while removing the hook is incredibly beneficial.  Along those lines, lipping tools also allow anglers to help fish recover immediately prior to release. Gently pull the fish in a figure-eight pattern to allow water to flow over the fish’s gills. You will know when the fish has recovered enough and wants to leave. If the fish does not seem to be recovering (and is legal), it is a good candidate for the stringer, allowing you to release other fish more likely to survive later in the trip.

There is not enough room in this article to list all the quick tricks anglers can implement to help fish survive after release, but there are resources available for those who wish to take their skills to the next level. The ReleaSense initiative, a partnership between the Harte Research Institute, Coastal Conservation Association, and Shimano Fishing North America, was created to provide a platform for anglers, industry, and resource managers to share information regarding the best catch and release practices for many prized sportfish species. It provides an expanding series of catch and release instructional videos, as well as interviews with leaders in the recreational fishing industry, fisheries managers, and expert anglers from across North America. Increasing awareness of this information will improve survival rates of released fish, ensuring healthy and sustainable populations of harvestable fish for the future. Visit www.ReleaSense.org to learn more, and stay tuned as we continue to expand, improve, and add content.

There is room for all of us to expand our use of catch and release techniques in all sectors of Texas’ marine sportfisheries. With a little effort, we can all ensure access to sustainable sportfisheries for generations to come.

Quentin Hall is a Research Specialist and Angler Engagement Professional for the Center for Sportfish Science and Conservation at the Harte Research Institute. He turned his lifelong fishing and hunting habits into a career, receiving dual bachelor’s degrees in Animal Science and Fisheries Management from the University of Missouri and his M.S. in Marine Biology from Texas A&M. While Quentin’s research focuses on a variety of studies ranging from juvenile sportfish recruitment dynamics to sportfish movements, his real passion is connecting anglers with the science supporting their fisheries.