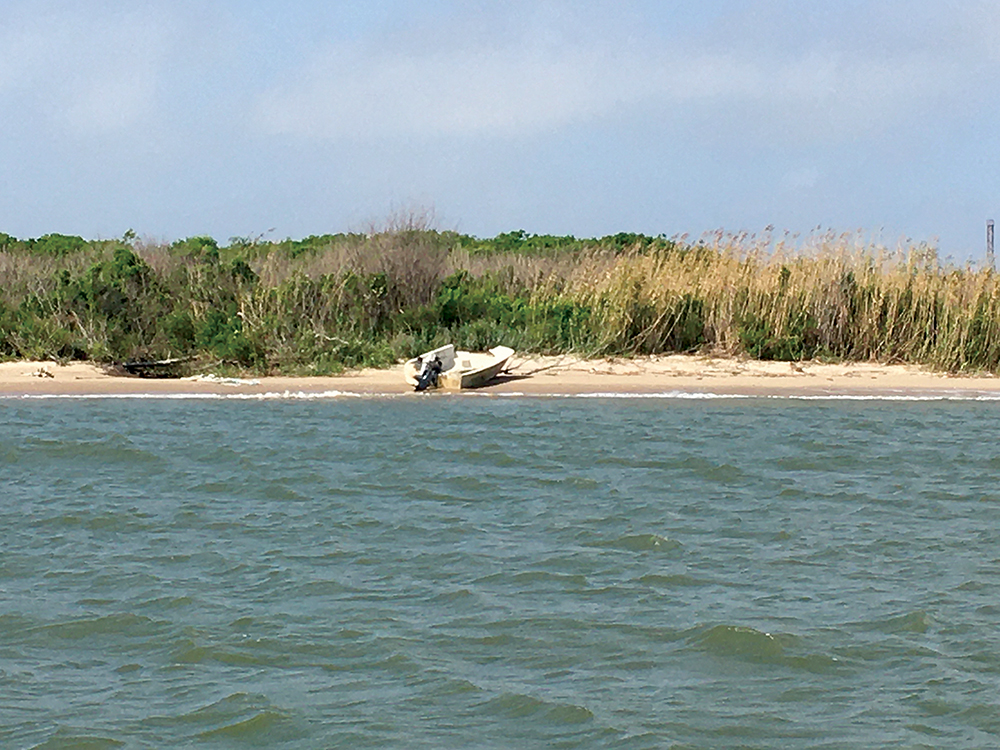 This stretch of shoreline produced some really good quality trout for years. Relentless ship swells have taken their toll. Now it’s pretty much washed up just like the boat you see here.

I recently fished a small tournament with my longtime buddy Jake White.  The tournament was a small event for a group of neighborhood friends. Jake and I really had nothing much to play for because this was a “recreational anglers” only tournament and I am a “fishing guide.”  Nonetheless, they allowed us to fish it just for fun.  Furthermore, I had been in a bit of a slump on some of my recent charters and I figured a little break from “work” to just go fun fishing with a buddy could do me some good.

The forecast held true the morning of the tourney as we eased out of the harbor and headed west in a sustained 20 mph southeast wind.  It was Saturday and another tournament was taking place.  With forecasts predicting wind gusts to 30 mph by 9AM it meant most boats would be stacked up on the south shoreline.  We had discussed our game plan the night before and mutually decided to fish an area where we’d both caught big trout in years past.

While running the shoreline our noses caught a strong whiff of trout.  We both turned our heads at the same time to notice small slicks emerging from a stretch of shoreline that gets passed up on a daily basis because it’s just not known to hold fish.  We slowed down and briefly discussed wading the area but both agreed that it was better to continue on to the spot that had been productive for big trout for us in the past.  Our thought was that there would be no “B” spot given the conditions and the crowds so we’d better stick to our plan and wade our “A” spot.  It seemed like a safer bet than trying something new on tourney day.  After all, we were only fishing for our pride.

As we slowly eased into the area we wanted to target both of us were concerned about the absence of bait and slicks.  The tide was quite a bit lower than what we would prefer for that particular spot as well.  The wind was quickly gaining velocity and boats were running across the bay to their spots.  We knew our window was shrinking so we decided to go ahead and wade the area anyway.  I’ve known Jake for many years and I can tell when he’s excited about getting out of the boat to fish.  His eyes get wide open and he gets this certain smirk on his face.  Well, he didn’t have that look and I wasn’t feeling it either.  We felt more like we were making ourselves fish the area rather than wanting to fish it – the confidence just wasn’t there.  After about 30 minutes of casting practice I decided to go get the boat and pick him up.  This was not remotely how we wanted to begin our day; tournament or no tournament.

Knowing our options would be limited, we decided to head back to that “unpopular” stretch of shoreline where we’d seen the slicks.  Sure enough, the slicks were still popping and there wasn’t another boat in sight.  About 45 minutes into our wade we still hadn’t brought a trout to hand despite getting several bites.  We often talk about how slicks are a dead giveaway that the trout are in the area.  This is almost always true but it doesn’t necessarily mean they’re feeding.  On several recent trips it actually meant that they were finished eating.  They were just regurgitating after gorging early that morning or during the wee hours of the night.

Despite their negative feeding habits I had recently been catching some nice trout by agitating them with topwaters.  It wasn’t doing the trick this particular morning so I tied on a Purple Demon MirrOlure Lil John rigged on a Saltwater Assassin Pro Elite sixteenth ounce jig head.  The trout were suspended, feeding upon tiny juvenile shad so I figured the Lil John rigged this way would stay in the upper part of the water column long enough to incite some more committal bites.  My use of braided line coupled with the stiff winds helped enhance the tiny soft plastic’s hovering ability.

Finally…I found something that worked!  After only a couple of casts I landed a 2 pound trout.  Jake yelled at me and asked what I was throwing.  He didn’t have any Lil Johns with him so he switched over to a Borboleta Lele floater to try to accomplish the subsurface suspended effect.  A few casts after he made the switch a 3 pound speck smoked his chrome and pink Lele.  Now we were having fun!  We never caught a ton of fish but the ones we caught were solid and it was very gratifying to find a way to trick them, especially in an area that probably hasn’t seen a pair of wading boots in a while. Trout avoiding heavy foot and boat traffic tend to squeeze into in-between type areas that would otherwise seem unlikely.  I later told Jake, “Man, we both know what a trout slick looks and smells like and we freaking drove past 100 of them this morning to get to our “spot.”  We know better!”  Who knows what we might have caught had we fished that area first thing that morning?

It usually makes sense to revisit spots that have produced for us in the past, especially for guides, because we can’t really risk not putting paying clients into a position to catch fish.  We usually save scouting missions for our off days.  But by the same token we have to remember what made us good at our profession in the first place.  Trout Fishing 101 involves finding active bait, targeting structure, noticing signs such as slicks, and then selecting the right lure to entice them.  Sometimes trout may not be where we think they’re supposed to be so we have to keep an open mind.  Repeating old habits and forgetting about the basics is how we can get ourselves in a rut.  This is especially true in bays where shoreline and bottom landscapes have drastically changed throughout the years.  The fish aren’t always where they used to be.

Sometimes we want fish to be there so badly that we spend too much time focusing on “the spot” even to the point where we knowingly pass up visible signs of fish to get there.  In addition, memories of big trout can get stuck in our brains and really mess up our thinking when trying to find current-day spots to fish.  I can honestly say that the day spent fishing in that little friendly tournament with no pressure and fishing the way I learned to fish, and the way we should all fish, sure helped me get back on track.  My clients and I had a great trip the next day!  It felt good to come out of the funk I was briefly in.

In a recent postgame interview Astros manager, Dusty Baker, was asked what he thought about several of his players being in a hitting slump.  I loved his answer; “You’re only one hit away from a hot streak.”