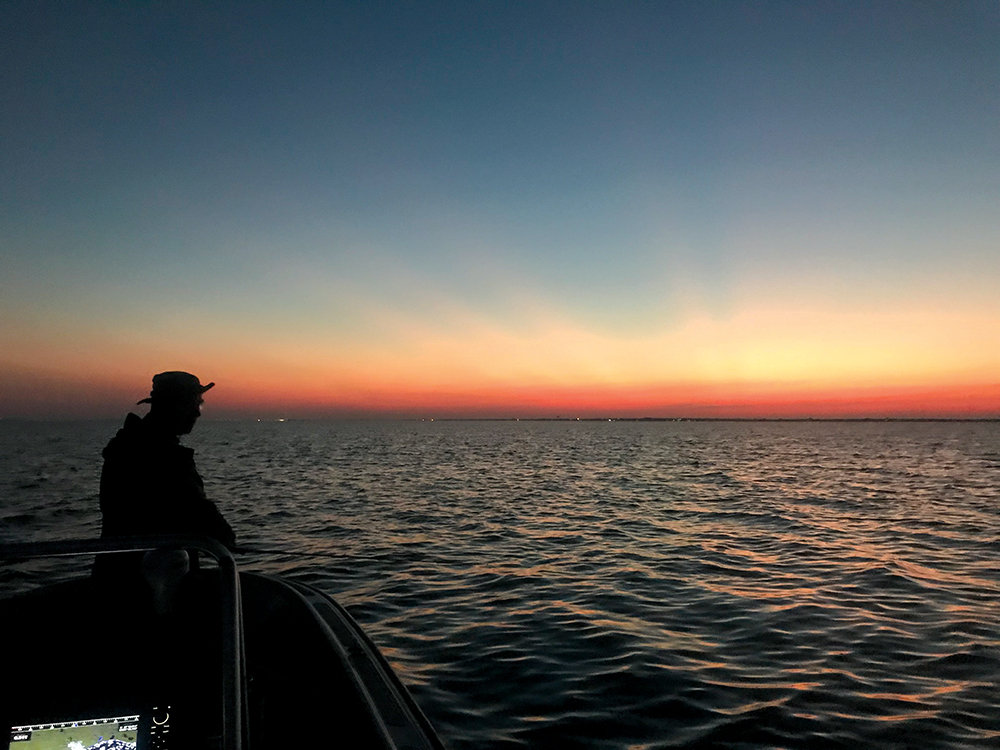 As of the timing of this story water temperatures have been hovering in the middle- to upper-70s across Galveston bays. As a result, the larger trout are spread out and seem to lack the urgency to feed aggressively as we’ve grown accustomed to this time of year. Some trout are still in their summertime pattern over deep shell and along sandbars while others have found their way to more winter-like areas such as mud / shell flats near deep water. The bays are still full of white shrimp but the majority of the trout feeding upon them are less than legal size.

The likelihood of this pattern changing before this magazine hits the newsstands is high, especially if you know how quickly Texas weather can change. December along the Upper Texas Coast offers probably the most eccentric weather pattern changes compared to other months on the calendar. It’s like November, December and January all rolled into one month. Regardless of what the weatherman has in store, I believe it’s important that astute fishermen understand how the timing and strength of cold fronts alter the patterns of the species we target.

We’ll typically see looser groups of trout sporadically feeding amongst scattered bait.  Mullet will tend to be more active on the surface but also more spread out over an area.  Tides are typically higher during these warm periods so marsh openings along grass-lined shorelines are great areas to target. We will sometimes literally catch our fish by casting up against the cord grass. Trout and redfish will frequent subtle undulations and potholes up shallow, but never too far from deeper water. These are high-percentage areas, especially when there are small oyster reefs in the vicinity. We tend to hop around from spot to spot more during these warm-up periods while picking up two here and three there. The phrase “school bus fishing” comes to mind. I have found that our best bite is typically early in the morning and late in the evening for the better quality trout.

Topwaters are always a fun choice during these stretches. My top three choices are MirrOlure She Dogs, Rapala Skitter Walks and Heddon Spook One Knockers. Ranking right up there with topwater plugs are hard-bodied twitchbaits. Two incredible choices are Borboleta’s LeLe and Texas Custom Lure’s Double D. I’m not sure which is more invigorating, a massive explosion on top or damn near having the rod ripped out of my hands when a stud trout violently slams my twitchbait.

Aggressive feeding takes place as trout sense the onset of winter and instinctively realize diminishing food supply. This is what we often refer to as gorging. Trout schools will tighten up and catching will be about as easy as it can get. I like to fish breaks along shallow reefs and at the mouths of bayous, preferably along windward shorelines.  Streaky water and mullet concentrations along with the occasional slick is a perfect scenario. If the wind is really puffing then we’ll set up behind marsh points and in back lakes while focusing on tide or wind-driven eddies and rip currents. I will always try to use a boat launch closer to my intended fishing area when I know a front is approaching. Regardless of how big or how many trout we think we can catch nothing is worth putting ourselves and others in danger.

Just about anything in our box will work when the bite is good but, because we’re typically dealing with higher winds, soft plastics are what I use most of the time.  MirrOlure Lil Johns, Provokers, and Saltwater Assassins rigged on 1/8 ounce jigheads work perfectly. Not only can we cover more water throwing jigs but releasing fish is faster and easier than dealing with multiple treble hooks. Crimping the barbs on our jigs adds to the ease even further and does minimal damage to the fish. As always, I use darker colors such as Red Shad, Texas Roach and Morning Glory in water with reduced clarity and colors like Limetreuse, Glow and Pink in clearer water.

Sudden water temperature drops and higher barometric pressure can cause a tough bite especially since the fish fed heavily during the passage of the front. Stronger fronts accompanied by stiff north or northwest winds will drop tide levels which can actually be to our advantage as fish will tend to concentrate in deeper guts, bayous, and channels.  The shear concentration of fish in these areas enables us to hit enough of them on the head to make it worthwhile despite the fact that they may not be feeding aggressively.

Of course, soft plastics always deserve a place in our wading boxes but colder water temperatures usually means transitioning more to mullet-imitating plugs, especially for larger trout. I hear the phrase “match the hatch” a lot. While I believe there is some validity to that phrase I also think that trout are more reaction feeders than anything. I understand that larger prey such as mullet are more prevalent the colder the water gets as most of the smaller forage such as shrimp and shad have left the bays. I also know for certain that a slow-sinking Paul Brown Corky Fat Boy hovering in the face of a five-pound trout will get smoked with the right twitch of the wrist. In this instance, placement and technique trump shape and size.

December will present us with a variety of looks as the weather changes back and forth.  Overall, I think fishing here in the Galveston Bay Complex will be good (by today’s standards) as long as we keep our heads on a swivel and react appropriately to the changes.

There was a time when trout fishing was really easy for both numbers and quality. If an area looked “fishy” then it usually produced. This isn’t necessarily the case these days, however. While my clients and I did enjoy a legitimate school of trout recently, many of our days are spent nook and cranny fishing. I mentioned “school bus fishing” earlier.  We tend to find smaller pods of trout than in years past. This requires moving around more as opposed to fishing just one area. As I peruse the bay I notice other boaters doing the same thing. I’ve come to the realization that there are fewer secrets than ever before. Anglers are not only more dialed-in but also have better technology and gear than what we grew up using. This is just one more reason to take it easy on the resource and respect what we have. Keep what you need but please release the rest.

Fun with Late-Season School of Jacks and Reds