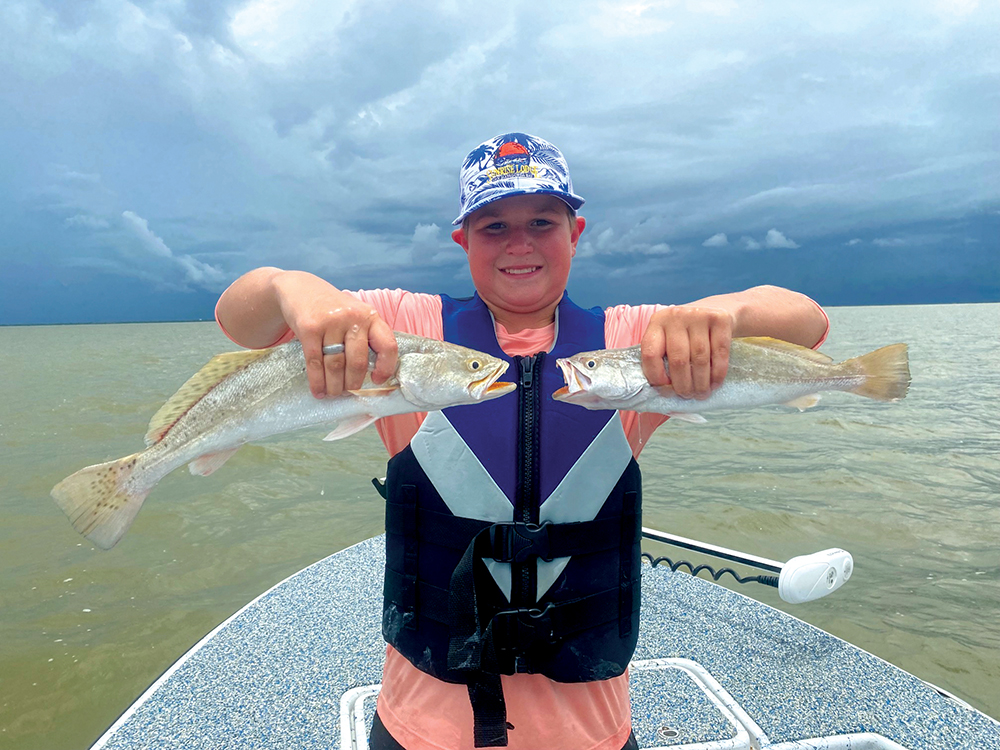 It’s an August morning and the flags are hanging limp at the bait camp; you are already sweating as you launch the boat before sunrise. You have a problem.

In the words of Capt. Tommy Alexander, “Should I go with a double meat with cheese or just get the triple-meat Whataburger? In fishing terms that means, “Should I take the safe bet and drift East Matagorda Bay and catch and release 5- to 8-pound trout, or do I roll the dice and head to the calm-green surf and hope for one of those magical days when every trout out there is ready to bang a topwater?

Neither are a bad choice in August.

The reefs in East Matagorda Bay are a good place to bide my time; and, you need calm, green waters to fish these pieces of shell during an arid August. I start at Long Reef and look for flipping mullet. If I see mullet, I begin wading on the far west end of the reef and work my way to the east. It usually takes at least two hours to wade it right. My bait of choice is a She Dog or Super Spook Jr.

If there is a chop on the water, the She Dog is my bait. If calm, the subtle Spook Jr. gets the call. Drull’s Lump, Halfmoon, Barefoot, Red Cone, Three Beacon and Bird Island reefs are all solid choices.

Say my first choice of the morning is the surf. I arrive and look for hopping shrimp, nervous shad and jumping mullet, and begin working the second bar with a topwater. If I get a blowup I get out and wade the first gut so I can fan-cast both the first gut and the top of the bar.

This scenario plays out best on a day with an ardent incoming tide. If the tide is falling, I have had better success using my Power Poles or “spot-lock” on my trolling motor and staging in five feet of water and casting back toward the beach from the boat. The attitude of the surf determines everything.

Many mornings the waves are too angry to get in tight on the beach. There is nothing worse than your boat taking “Hawaii 5-O” waves over the bow as you try to push your boat off the beach. I speak from experience.

The new trolling motor technology of “spot-lock” allows your boat to remain outside the big waves while not fighting an anchor to hold you in place.

There is no shame in arriving on the beach and turning back around and heading to the bay. Sometimes conditions look prime for a tranquil Gulf of Mexico, but as you break the jetties 2-3 footers are rolling onto the sand; and, there is nothing worse than a humid August day with Mal de Mer.

Post Freeze Report: I am happy to report we have had some wonderful trout days in the past six months, since the Freeze of 2021. What I am not happy to report is the loss of enthusiasm for taking care of our trout.

Several guides and outfits declared they would take the lead in changing attitudes on their boats for more of a catch-and-release mentality, while losing the stringer and dead fish pictures on social media. Everyone was on board with thousands of Facebook likes and pats on the back for conservation.

What happened? Those same captains who stepped up for the fishery in the spring are now back to the “good ole’ days” of killing everything they catch. It is very disappointing.

Many cry, “I have to make a living; I have to post dead fish pictures.” What I have found on my boat has been just the opposite.

We explain what we are trying to do for the fishery and 99% of our customers are on-board. There has been one instance in the last six months when an angler on my boat was not hip to what we were selling. I will take those odds and keep on rolling.

As professionals in our craft we control the narrative. We are the ambassadors, good or bad, for our estuaries. The freeze, as bad as it was, gave us a reason to change and be better anglers and a real opportunity to make our fishing so much better.

The good news is there remain many anglers who are carrying the torch of conservation.

We can’t control everything, but we can control ourselves.

There is nothing wrong with partaking of the bay’s bounty and enjoying the wildlife God has granted us for sustenance – just be good stewards and consider giving back more than you take.