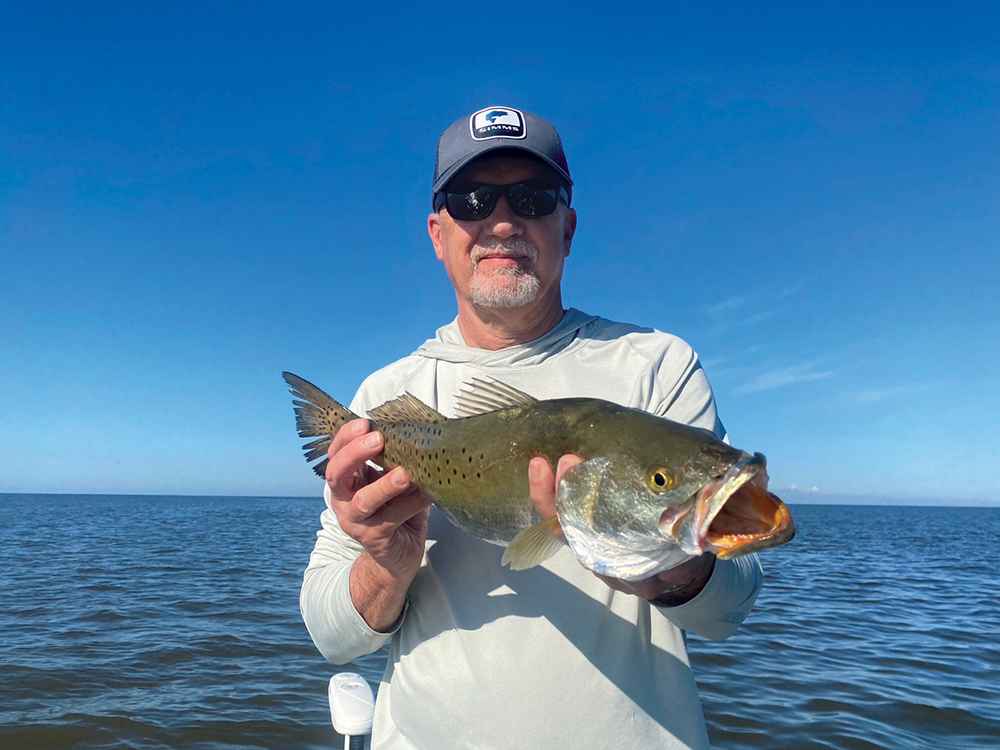 Unless a cold clipper comes barreling down from the north, Matagorda anglers can expect more mild temperatures and solid catches in January. I can’t remember a milder November and December. You won’t hear me complaining though – I’m good with any temp north of freezing. December was more like October, November was more like September, so maybe January will take on characteristics of a normal November.

Traditionally, Corkys are premiere January baits, but topwaters get the nod on warm, clear afternoons. By January, shrimp have left the bays and speckled trout adapt their diet to finfish. That’s when slow-sinking mullet imitation plugs like Soft-Dines and Texas Custom Corkys go to work.

Drifting can sometimes be the best play, especially with low-tide winter water levels. East Bay is often 2-3 feet below normal in January, depending how hard the north wind blows. Raymond Shoals, Boiler Bayou, Pipeline Reef and Cleveland Reef hold good fish during the winter; and, when tides are extremely low, shoreline redfish move off the flats to these reefs in the middle of the bay.

Locales receiving the most tidal flow often hold the majority of schools – that means reefs and mud flats adjacent to the Intracoastal in East Matagorda Bay. Brown Cedar Flats, Chinquapin Reefs, Bird Island, Half Moon Reef, and the Log are all proven winter spots holding healthy specks. I'll be honest, some days they bite, some days they don’t. But when they do, it doesn't take long to score a limit. Corkys, MirrOlures, Soft-Dines and glow plastics worked gingerly through the water column excite lethargic fish.

When the wind really blows, never discount the Colorado River. Trout congregate in the deep, warm waters of the Colorado and if we remain in a dry spell the entire river all the way to Bay City has potential. December fishing in the river was outstanding for trout while most catches were coming on Down South Lures, Bass Assassins and MirrOlure Marsh Minnows.

Most of the time we toss to the bank and work the drop. But when we have trouble finding fish, we troll the middle of the river and bump bottom until we find a school. The river drops from two, to five, to nine feet along the bank and the trout hang close to the drops, depending on the water temperature.

We have fitted out Haynie Magnums with Minn Kota trolling motors for this type of fishing. The rivers and channels give us a place of refuge when the wind blows our hats off. It is a lot like bass fishing by beating the banks of the river and channels.

Be mindful of new trout regulations coming down the pipe very soon. TPWD has indicated they intend to raise the minimum length limit to a 17-23 inch slot of speckled trout with a three-fish daily bag, possibly as soon as late-January or February.

Our boats began practicing a more conservative harvest approach to trout after the Freeze of 2021 and we hope attitudes will continue to change for the betterment of our fishery.

Duck hunting continues through Jan.30. November and December were strong with good numbers of teal and gadwalls working our freshwater marshes.

Please continue to conserve our estuaries and release more than you take.