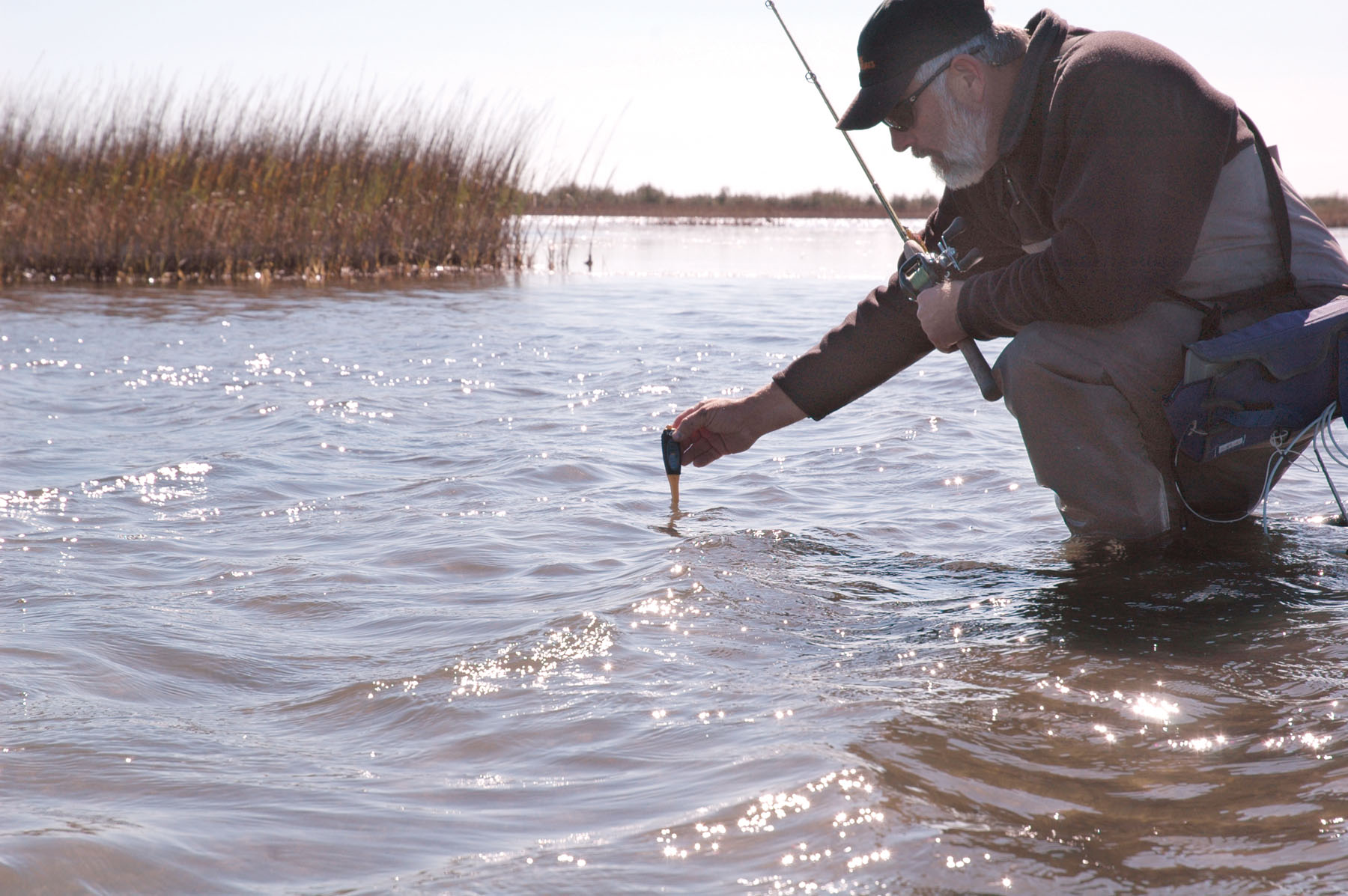 Testing temperature.
Fishermen love to tell tales and most include little quips and sayings to enhance them.  One oft heard tidbit declares, “Ten percent of the fishermen catch ninety percent of the fish!” And while it may be true that not everybody “whacks them” every day, if you hang around guys whose luck seems better than average you will soon notice they go about things differently than those who get lucky once in a while.

Take for example winter wade fishermen who seem to do well on a better than average basis.  Then narrow the field to a few hardcores who can find fish in even the most savage conditions.  One quality will stand out; these anglers pay attention.  Without saying, they have fished long enough to have memory banks filled with winter hotspots. But in addition, they are keenly aware of everything that happens in the areas they select.

Anybody who can don waders and strap on a wade belt can find bait activity when it occurs above the surface.  Guys who learn to spot small wakes and ripples around structure and occasional baitfish flickers under the surface are the really savvy types. And then, having the faith and patience to cast purposefully and repeatedly with slow-moving “mullety” lures separates the guys who catch from all who try.

I have enjoyed the uncommon fortune to fish with some of Texas’ best trout anglers; Watkins, Webb, Eastman, Cochran, Friermood, Pustejovsky, McBride and Rowsey to drop some names. They are all individuals and fish their own way but they have common traits.  They notice everything and they know how to make the signs work. One good example is a raw winter morning in Baffin with Cliff Webb.  Four of us in the water and no bites for two hours. Cliff noticed a baitfish flash under the surface and burned his Corky back with lightning speed.  Firing it into the exact spot where the mullet flashed, it barely sunk from sight…slammed by a six pound trout.

No doubt these guys have spent careers honing their skills and we cannot fish with them everyday, so we must learn from them when we can and apply it to our own endeavors.  Mike McBride taught me a little trick years ago and I use it on every winter wade.  Mike pulled a tiny thermometer from his pocket and checked the water temperature. I would have bet it was more of his “McTrout” hocus-pocus but I paused for a minute anyway before turning to go head back. The half mile mud wade had taken its toll; I just wanted to get in the boat and rest for a while.

Peering at the tiny instrument as if it was a crystal ball, Mike said, “There’s warm water running out of that drain, chunk that floating Devil (Corky) up there and wag it real slow.”

The result was instant, a five pound trout mashed it, nearly taking the rod from me. Why there and not from the other drains and coves I’d tried, Lord knows there’d been enough of them. Temperature!  The tide had begun to recede and the skinny mud flat had warmed considerably in the afternoon sun. The water in this drain was 64-degrees, full of bait and several heavy trout.  Mike later told me the water we’d work all along that half mile of muddy shoreline was a chilly 55-degrees.  The drain and chance for a temperature change told him to wade that extra hundred yards to check it out.

Needless to say I began to carry a thermometer after that experience. The other day I spied the digital thermometer featured here at Fishing Tackle Unlimited in Houston.  This little ditty costs only $24.00, a pittance compared with everything we spend to be better anglers.  It is marketed by the William Joseph company and comes with a battery that will last almost forever, well the package says 1000 hours.  It is waterproof and shock resistant and delivers readings to one tenth of a degree in seconds…what a deal!

Even if your boat’s GPS and/or depth finder is equipped with a water temperature sensor, you still need a thermometer in your wade jacket pocket.  I’ve tried food thermometers and several other styles, this one is the bomb.  If you are not already into monitoring water temps to find winter fish you should be.