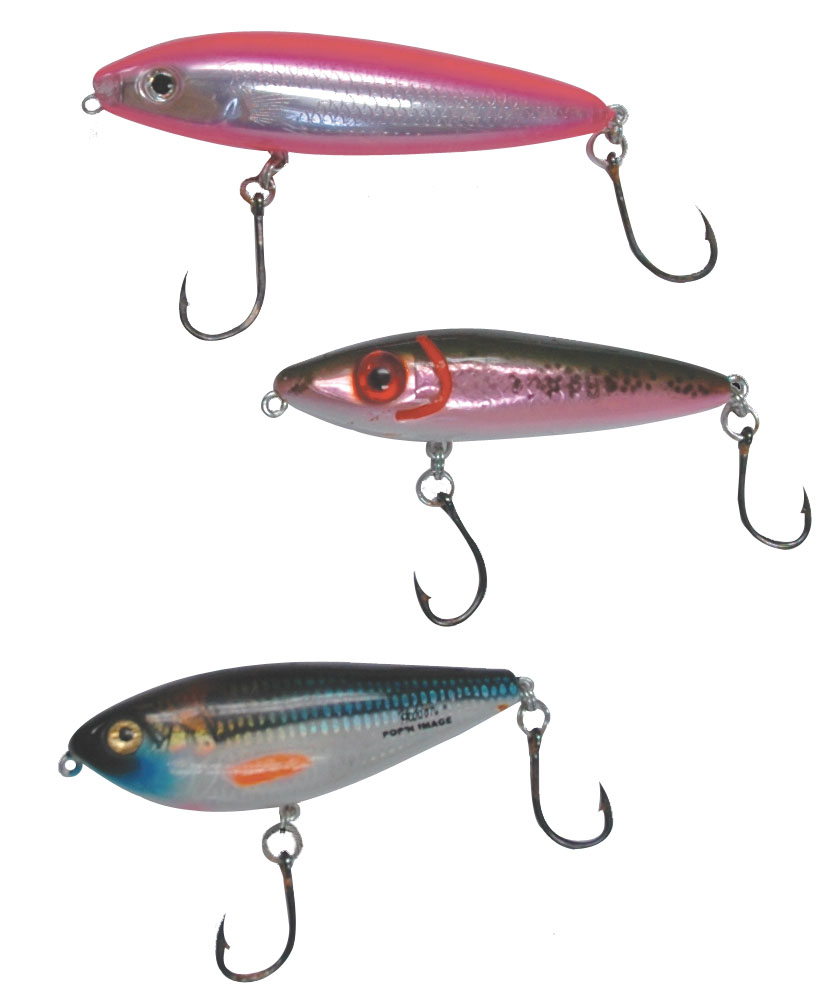 Capt. Dan Colley from down at Arroyo City was the first to introduce me to single hooks on surface plugs. I was lamenting the floating grass problem I'd been having and Ol' Dan started giving me one of those "cat that ate the canary" grins. He reached in his tackle box and produced a Spook with single hooks dangling from it. That was quite a few years ago.

Now I have to admit I was pretty skeptical. A Top Dog comes from the factory with two treble hooks on it that's six hooks the way I count them and more has to be better and you want me to believe two is just as good? Did you by chance flunk third-grade arithmetic?

Well, before we pass judgement, let's ask some top fishermen what they have found:

John Regnier "I'd say if my hook-up ratio suffers at all, the ratio of fish that I end up landing more than makes up for it." John began using singles because he was tired of fighting floating grass in Port O'Connor's back lakes. John cites added benefits of greater safety to himself and fishing companions; also likes the "fish-friendly" aspects. Plugs with multiple trebles have a way of getting hung in a fish's gill plates and eyes. John likes to practice catch and release.

Capt. Mike McBride - "Hell yes they work, that's all we use." Mike admits he wasn't sold at first but now cites several benefits. "You'll catch just as many fish with less danger of getting a hook in your finger handling them; not to mention the grass problem we deal with on a daily basis here in the Lower Laguna."

Capt. Billy Sandifer - "Our biggest problem with topwaters in the surf is the sargassum and single hooks really help. We target jack crevalle anytime we can find them and those guys are famous for straightening treble hooks. Replacing trebles with stout single hooks is the way to go."

Back to my personal experience - apart from the floating grass thing, my chief reason for going to single hooks of late has been participation in redfish tournaments. A heavy red that straightened your hook is only a lame excuse at weigh-in. Any fish that ends up severely stressed during a long fight can die in your live-well, and that will get you a half-pound penalty. We have learned to tighten the drag and get them in the boat as quickly as possible.

Here's what works Owner, Gamakatsu, VMC, Mustad, Eagle Claw and others all offer the type of extra-strong hooks that work for this purpose. Some manufacturers call them live bait hooks, others call them tuna hooks and those sold as octopus hooks work well too. What you're looking for is a single hook forged from heavy wire stock, heavier than what we commonly see used to make trebles. Another key attribute is the diameter of the eye, select hooks with eyes large enough to accommodate heavy split rings. Some manufacturers offer single hooks with forged rings attached and these really rock. Note in the photo above; it is necessary to mount the single hooks on a dual-split ring setup so they'll swing freely. The front hook should face forward and the rear hook should face backward. Give it a try you might be in for a surprise!