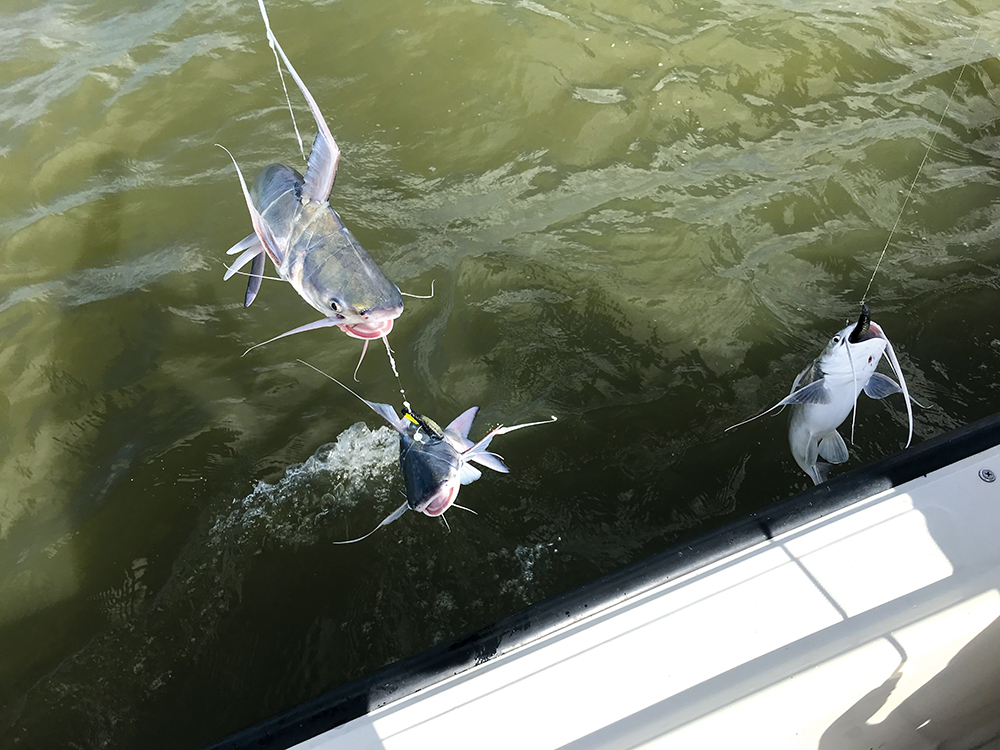 This is when you know it’s going to be a tough day!

We often talk about following signs to lead us to trout and redfish. The list of signs is lengthy and varies widely throughout the year. Finding color streaks is a common strategy during the cooler months. Fishing slicks is a great approach year-round but especially during the summer months.  Working mud boils to catch schooling redfish and black drum is another tried and true method that can yield great results and tends to be more prevalent May through early-November, as a general rule. It’s also not uncommon to catch a big trout, or several, mixed with the reds and black drum.

As professional saltwater fishing guides we log many hours on the bay.  Because of this, we have learned how to read the water sometimes to the point where we can almost visualize what’s happening beneath the surface.  Many days we’re very fortunate to be able to focus on the aforementioned color streaks, slicks or mud boils. Other days, birds, bait concentrations or riptides may point us in the right direction. These are scenarios that typically equate to easy fishing.

We tend to make it sound much easier than it sometimes is when we write our monthly articles. The fact of the matter is that it’s not always a gimme.  The signs aren’t always there. There are many days when cliché phrases like “Find the bait…Find the fish” simply aren’t applicable. These are the tough days no one likes to talk about. So, let’s talk about them now.

Every summer we can get into a little funk due to numerous factors. I had a little stretch last year that tested my fortitude. On the way out that morning I just had a feeling it was going to be one of those tough late-summer days.  It was dead calm; the water was hot and there was very little tide movement. I had a new crew on board so there was the bonus of having a little added pressure. We had experienced a waning bite the previous couple of days with the weaker tides on the backside of the full moon, so my thoughts were to start near the ship channel or Intracoastal Waterway.  Either of those areas would provide artificial tides from ship and barge traffic, which is something we wouldn’t get if we chose to fish oyster reefs in the middle or near the back of the bay.

It was blowing too hard to fish near the channel so I chose a small stretch of shell near an opening that lead to the ICW. It was an area we typically wadefished but I was just trying to pull a rabbit out of my hat, given the circumstances. One small slick emerged on the deep edge of the little reef in about three feet of water. With the southeast wind I quietly trolled toward the shoreline in an effort to line up well behind the slick which was about 80 yards off the bank. It wasn’t the best approach shot in the world but it was the best I could do using a 22-foot Whaler. We were able to trick two decent trout and one accidental flounder on that drift then the fish scattered, as I feared they would. Drifting shallow water with continuous hull slap is never a good plan unless you’re forced to do so. In this case it was because my clients didn’t wade.

We hopped around to various bayou drains and shoreline reefs basically just getting in a lot of casting practice until, by the grace of God, the wind began to subside. Our next stop found us perusing open water near ship channel spoil reefs looking for signs of life. I eased into an area where we had caught a few tide runner trout the week before. There was just enough ripple on the surface to see any slicks that may appear. Unfortunately, everything in the underwater world seemed to be asleep. I had a strong feeling the fish were there, so I decided to try something before moving on to the next spot. I cranked the big motor and slowly idled along the edges of the spoils. Sure enough, two small slicks emerged as the vibration from my outboard caused the trout to regurgitate. I doubled back but this time with the trolling motor. Once my crew started getting hook-ups I slipped the anchor over the side. Our bites seemed to come in waves as ships passed in a distance. Most folks don’t think of using their boat as a fish-finding tool but sometimes it works. That little trick sure saved my bacon that day!

Then sometimes on the no-sign days we have to turn into largemouth bass fishermen and focus on structure and areas we think the fish should be for the given conditions (i.e. water temperature, time of year, time of day, etc.). Tossing soft plastics up against rock groins and other visible structure has become a fantastic bail-out tactic for me in recent years. As much as I take pride in letting the fish show me the way, they’re not always that generous. Galveston and other Texas bays are laden with various limestone breakwaters, granite rock groins and jetties which are covered with algae, barnacles and oysters. Piers and boat docks are also good targets. These types of structure all provide a buffet for predator fish.

Loud topwaters (i.e. MirrOlure She Dogs, Heddon Super Spooks, Rapala Skitterwalks, etc.) in calm deep water can draw strikes when few other baits can. We experience it every year. This somewhat unorthodox strategy of drawing agitation strikes has saved many trips for me. Trout will hold in cooler deep water over oyster reefs and mud near shell in 8- to 10-feet, especially near the ship channel during those hot late-summer days.  This isn’t a revelation here on Galveston Bay. As a matter of fact it’s pretty much common knowledge up and down our coastline. Years ago when I had the opportunity to fish the Lower Laguna Madre often we would catch lots of trout and reds while wading and drifting deeper spoils along the ICW. By the way, it doesn’t have to be early in the morning to get on a good topwater bite. Some of our best catches have occurred in the middle of the day.

Perseverance. Some call it stubbornness. You’ve got to want it bad enough to put in the time. We seem to live in a world of instant gratification.  Unfortunately, I don’t have a dinner bell or a dog whistle that’ll work for trout. I mean, we’re already out here, so why not stay another hour or two to wait on a tide change, that will usually trigger a feed? Did you come out here to fish or did you just want to go for a boat ride? If you prefer the latter you should’ve taken the Bolivar ferry. It’s free!

The traditional pop-pop-fall technique doesn’t always draw strikes. Slack-tide fish, or fish in a negative feeding pattern, usually need something special in the way of presentation to trigger a bite. Lures with generally higher success rates in these scenarios are paddletail-style plastics (i.e. Saltwater Assassin Sea Shads, MirrOlure Marsh Minnows, etc.). The best part is that they are highly effective with a straight retrieve technique. The vibration and sense of urgency created by a fleeing shad or whatever they think it is will get them to change their minds about not eating most of the time.

On a side note - I’m absolutely tickled to death to see more guides and recreational anglers along the Texas Coast practicing catch and release with our speckled trout. The mentality seems to be shifting more in the right direction. Thank God anglers are wising up because it will make things much better for everyone in the long run. See ya’ll next month!